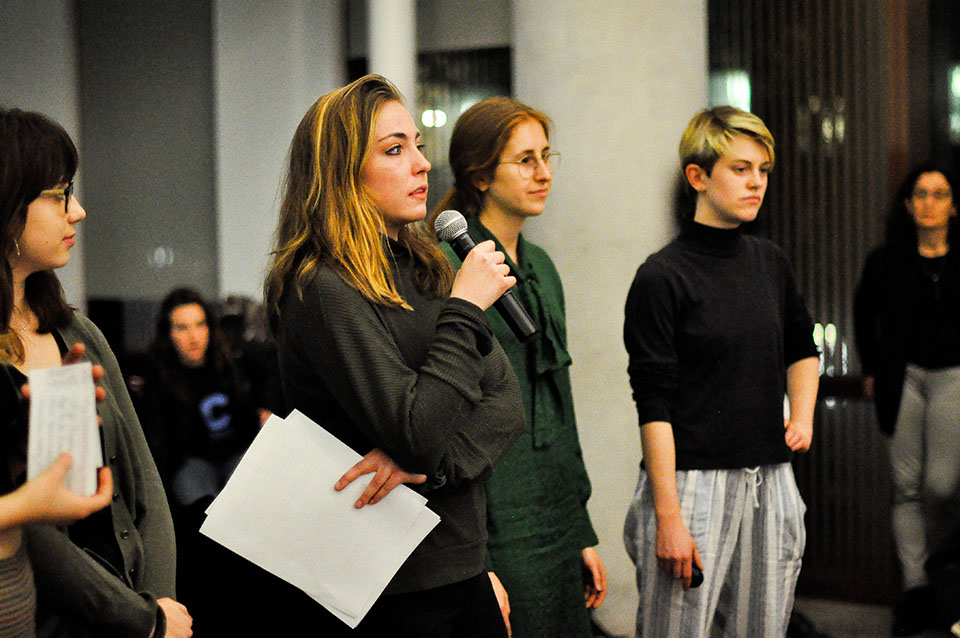 Sinead Hunt, BC ’20, calls upon Barnard’s Student Government Association to write a public letter endorsing the establishment of an Advisory Committee on Socially Responsible Investing at Barnard.

Barnard’s Student Government Association voted unanimously to release a statement to the college’s Board of Trustees in support of the establishment of an Advisory Committee on Socially Responsible Investing on Monday night.

The statement comes in response to a campaign spearheaded by members of the Roosevelt Institute at Columbia University, who claim that an ACSRI would be necessary to provide increased transparency surrounding Barnard’s endowment, and to create a clear mechanism through which Barnard students and student groups can submit investment and divestment initiatives. Campaign coordinators formally requested SGA’s endorsement of the campaign during an SGA meeting in early February.

The letter was sent in an email to Barnard’s board of trustees, which would ultimately approve the creation of the committee. It also requested that members of the Roosevelt Institute be invited to present their campaign findings—which focused on the relative success of Columbia’s ASCRI in including students in conversations about the University’s investments—directly to the board.

In the letter, SGA cited the need to include students voices in discussions about the sociopolitical ramifications of Barnard’s investments, in relation to the college’s belief in free academic discourse, and the importance of uplifting the voices of women and non-binary people in the financial sector, as primary motivating factors for supporting the creation of an ACSRI. .

“We believe this committee would further the College’s mission of intellectual collaboration within our academic community, continue the College’s tradition of the free exchange of ideas, and support women and non-binary people in the financial sector,” the letter said. “An ACSRI would bring agency and representation to our constantly evolving student body as we are given an active stake in our College’s investments.”

If established, Barnard would join peer institutions such as Smith College and Wellesley College, as well as Columbia, in maintaining an ACSRI or an equivalent committee.

Read the full statement released by SGA below:

Upon The Roosevelt Institute at Columbia University’s request to issue a statement of support urging Barnard College to establish an Advisory Committee on Socially Responsible Investing (ACSRI), SGA Representative Council has voted unanimously in support of the following statement. The statement has been emailed to the Barnard College Board of Trustees:

The Barnard College Student Government Association believes that it is imperative for Barnard’s administration and Trustees to support a discussion of socially responsible investing among all members of the Barnard community. As a college with a stated mission of building a community that “participate[s] together in intellectual risk-taking and discovery,” an ACSRI would facilitate substantive dialogue among students, faculty, administrators, and Trustees.

When announcing their decision to divest from climate change deniers in 2017, the Presidential Task Force for Divestment affirmed Barnard’s commitment to the “free flow of information.” The inclusion of student voices in the Presidential Task Force, as well as the larger dialogue surrounding divestment, engendered greater awareness of the significant political, social, and ethical ramifications of the College’s endowment among our student body. As the effort to finalize divestment from climate change deniers continues, we ask the College to establish a permanent ACSRI ensuring this reciprocal exchange of ideas is preserved for future generations of students.

As a historic women’s college, Barnard is dedicated to “addressing issues of gender in all of their complexity and urgency.” Given that women and non-binary people are underrepresented in the financial sector, we believe that Barnard has an institutional imperative to enlist the voices of its students in the management of its endowment, thereby challenging the historical exclusion of women in finance.

There is a strong national precedent to support the creation of an ACSRI at Barnard College. Beginning in the 1960s, colleges around the country recognized that divestment acts as a form of speech and began asking their institutions to align their financial decisions with their core institutional values. Today, a majority of colleges in the Consortium on Financing Higher Education (23 out of 35) maintain an ACSRI. Barnard should now follow the lead of peer institutions which have already established committees on socially responsible investing, such as Smith College, Wellesley College, Williams College, Oberlin College, and most Ivy League institutions, including Columbia (which established its own ACSRI in 2000).

Therefore, the Barnard College Student Government Association urges the Board of Trustees to establish a Barnard College ACSRI. We believe this committee would further the College’s mission of intellectual collaboration within our academic community, continue the College’s tradition of the free exchange of ideas, and support women and non-binary people in the financial sector. An ACSRI would bring agency and representation to our constantly evolving student body as we are given an active stake in our College’s investments. We ask that the Board of Trustees invite the Roosevelt Institute to the Committee on Investments to present their research and campaign achievements at the Trustees’ earliest convenience.