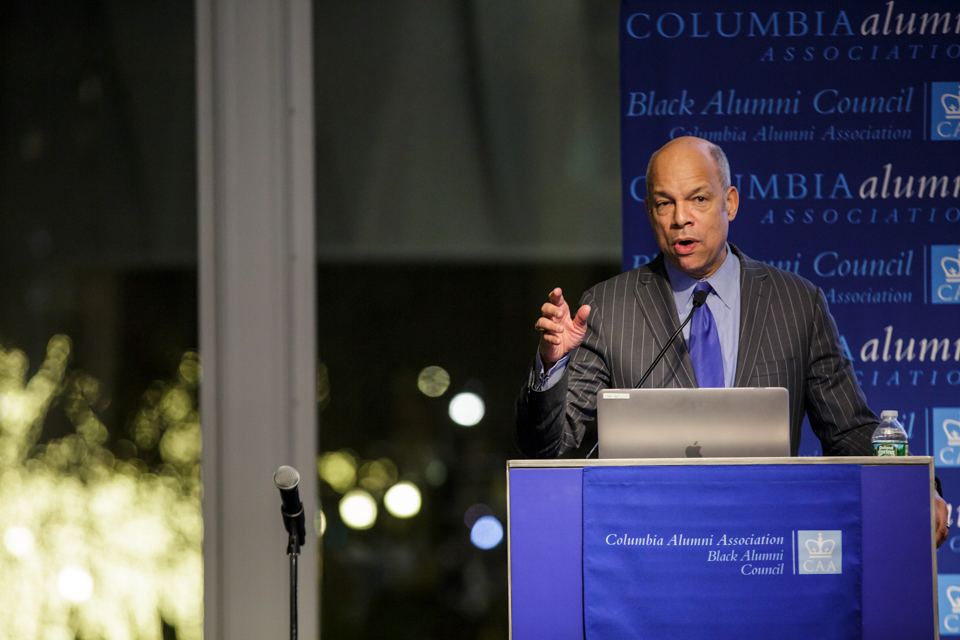 Johnson emphasized the important role that alumni associations like the Black Alumni Council play in guiding students through their experience at Columbia and beyond.

The Heritage Award is given annually by the BAC to an alumnus who has “chosen to enrich the lives of others, to protect the rights of others, to build better organizations, to uplift those in need, and ultimately create a more just, equitable, and learned society,” according to the BAC website. Awardees have made significant contributions in multiple fields, including politics, journalism, and education. Previous honorees include New York Times Executive Editor Dean Baquet, CC ’78, Columbia Journalism Professor June Cross, and Teachers College Vice President for Diversity and Community Affairs Janice S. Robinson.

In his acceptance speech, Johnson, who served as the fourth United States Secretary of Homeland Security from 2013 to 2017 under President Obama, highlighted his close ties to Columbia. His father, Jeh V. Johnson, CC ’53, as well as five members of his family, hold degrees from various schools at Columbia.

“This is a great honor for me to accept this award from the alumni association. Columbia University is very much a family affair for me. We have, by my last count, seven Columbia degrees in my family,” he said.

Johnson emphasized the important role that alumni associations like the Black Alumni Council play in guiding students through their experience at Columbia and beyond.

Reflecting on his path to becoming Secretary of Homeland Security, Johnson recalled the words of his own graduation speaker, politician and civil rights activist Andrew Young.

“[Young] said that, ‘In the arc of your life, you will see and do things that are beyond your current comprehension, if you are willing to experience life and take risks.’ And he was right,” Johnson said. “At the moment he said that, on this campus, there was another black kid, with an African first name, named Barack Obama, who was walking around this campus, who was going to be the first black president of the United States—something I thought I would never see in my lifetime, and I was going to be in his cabinet.”

Johnson also advised students to challenge themselves to be proactive in building connections and asking for advice, even in the most intimidating of cases.

After leaving his position following President Trump’s inauguration, Johnson returned to work at the law firm of Paul, Weiss in New York City.