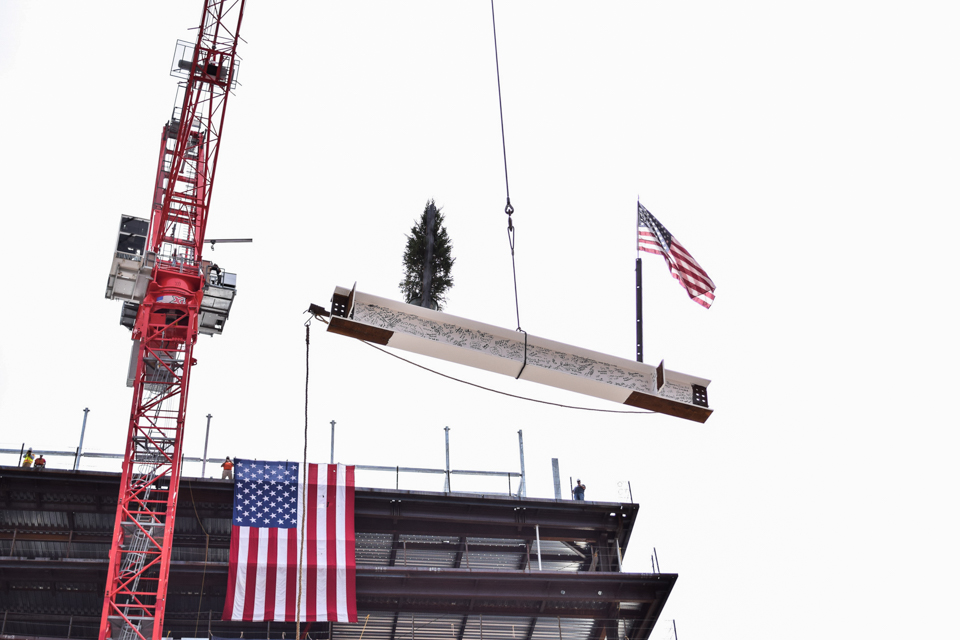 Among those who signed the commemorative beam were Suzanne Goldberg, the executive vice president of University Life, General Counsel Jane Booth, and Senior Executive Vice President of the University Gerald Rosberg.

In the shadow of two rising buildings poised to be at the center of the Business School’s new campus, senior administrators celebrated the growth of Manhattanville and the potential it promises for interdisciplinary research. Together, they represent the culmination of a conversation that, according to administrators, has been over two decades in the making.

The opening of the Ronald O. Perelman Center for Business Innovation and the Henry R. Kravis Building in 2022—paid for with $225 million from the two eponymous donors—will serve as a landmark moment for both the Business School and Manhattanville. They will be the fourth and fifth buildings in Columbia’s 14-year effort to secure the space necessary to facilitate collaboration between world-class neuroscientists, business people, artists, and engineers, positioning the University at the forefront of innovation in academia.

Inspired by Bollinger’s desire to secure the space necessary for Columbia to further establish itself as a world leader in higher education, the Manhattanville campus is scheduled for completion by 2030. The first phase of this extensive project is set for completion by 2020; the relocation of the Business school will comprise the second phases, and the transition of the School of International and Public Affairs will mark its completion. However, a lack of fundraising updates on SIPA’s move cast doubt on the completion of phase one.

For professors in the Faculty of Arts and Sciences, the extensive development and fundraising efforts raise concerns that Columbia is leaving behind basic scientific and humanistic inquiry for flashier initiatives. Even Uris Hall, which will be given to Arts and Sciences following the Business School’s departure, faces challenges within the excitement of long-awaited expansion: There exists no funding to renovate its facilities, even following extensive plans, committees, and judgements from faculty and administrators that the space is unfit for modern educational needs.

But for the Business School, the campus paints a future framed by innovative architecture, designed to facilitate collaboration between faculty, students, and administrators, with a chance to redefine modern academic work.

“We all understand that space is one of the most critical constraints we have at this University … with [the new campus], we can now imagine a new future. We can now pursue our ambitions. We can provide a better education,” Costis Maglaras, the newly appointed dean of Columbia Business School, said in a speech at the ceremony.

Other administrators present at the ceremony included Suzanne Goldberg, the executive vice president of University Life, General Counsel Jane Booth, and Senior Executive Vice President of the University Gerald Rosberg. All signed a commemorative beam to be placed onto one of the two new buildings.

Charles Renfro, the lead designer for the two buildings, explained that the design aims to engender community and relationships between all parts of the Business School. According to Renfro, the buildings represent siblings: “each with their own personality, but with a shared DNA.”

David Greenberg, executive vice president for University Facilities and Operations, also credited Turner Construction and the construction workers for their dedication to the new campus.

“To stand here after so many years and to see what’s already here and what’s to come is humbling … The vision of this remarkable interdisciplinary campus on the 20th century is coming to life and the Business School is a central part of that.”

According to Maglaras, conversations about expanding the campus of the Business School had begun prior to his arrival at Columbia 21 years ago. When plans for Manhattanville began to come to fruition 10 years ago, he said he began to see a new possibility for the school.

“We are now actually creating a new future for the school … This is a time we can redefine what the school does, and what the University does, through this expansion,” Maglaras said.