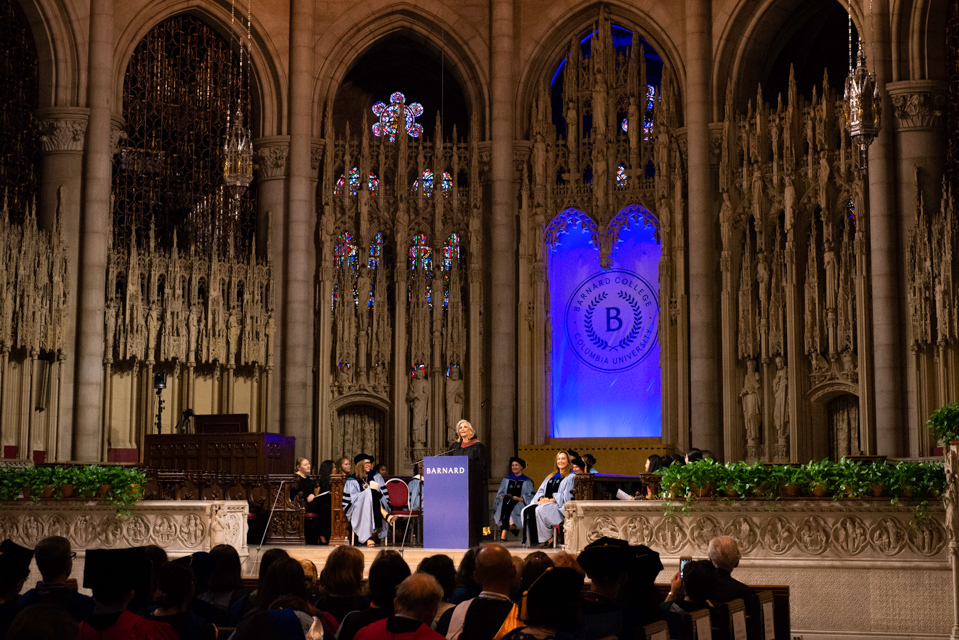 Award-winning documentary film producer Sheila Nevins, BC ’60, welcomed students back to campus with an excerpt from her bestselling memoir during a speech at Barnard’s 2019 Convocation.

Nevins is the head of the Documentary Films division at MTV Studios and previously served as the president of HBO Documentary Films. She has won over 30 individual Primetime Emmy Awards—more than anyone else—and has supervised more than a thousand documentaries since her career took off in the late 1970s.

Her memoir “You Don’t Look Your Age…And Other Fairy Tales” was a New York Times Bestseller when it was released in 2017. Nevins read an excerpt from the memoir that described the challenges of growing up with her mother, who suffered from a severe form of Raynaud’s disease. She recounted a time that the two of them went to Chock full o’Nuts, a now-closed coffee shop that was once a major hub of campus life—only to be subjected to verbal abuse by a fellow customer, who was disturbed by the sight of her mother’s amputated arm. Nevins recalled her frustration with herself for apologizing to the customer rather than standing up to her abuse.

“So I would eventually become a documentary filmmaker, to champion stories about those who are less fortunate. Mostly I chose to tell stories of the struggle to triumph in an uncertain and often cruel world,” she said. “I’ve always been interested in those who need visibility and acceptance—anonymous victims of unfairness, deprivation, and poverty. I guess I was determined to right my ineffectiveness at that lunch counter visit. Documentaries talk back, while I had been unable to.”

Earlier in the ceremony, Barnard President Sian Beilock encouraged students to prioritize their health and well-being throughout the academic year. She discussed Barnard’s recent partnership with The Jed Foundation, a nonprofit organization dedicated to improving the mental health of teens and young people by partnering with colleges and universities across the nation, and the college’s newly announced initiative, “Feel Well, Do Well @ Barnard.”

“This initiative is built around the idea that all members of our campus community are responsible for the health and wellness of our students,” Beilock said. “It’s designed to support and empower our students to thrive inside and outside of the classroom.”

The announcement follows Columbia’s partnership with Jed, first announced in spring 2017. Since then, the University has renovated rooms in Lerner Hall to increase student recreational space, launched a new website to centralize mental health resources, and expanded drop-in hours for Counseling and Psychological Services, among other changes.

Chair of the Barnard Board of Trustees, Cheryl Glicker Milstein, BC ’82, shared how Barnard has influenced her life for nearly 40 years—first as a student, then as a parent, now as a trustee—and urged students to learn from each other and their professors.

“This college has made me what I am today, and will do the same for you over your four years and over your lifetime,” she said. “I welcome all of you to a new academic year. Treat your classmates and professors with respect, opt for civil discourse, listen to others’ perspectives, work together, and love and understand one another.”