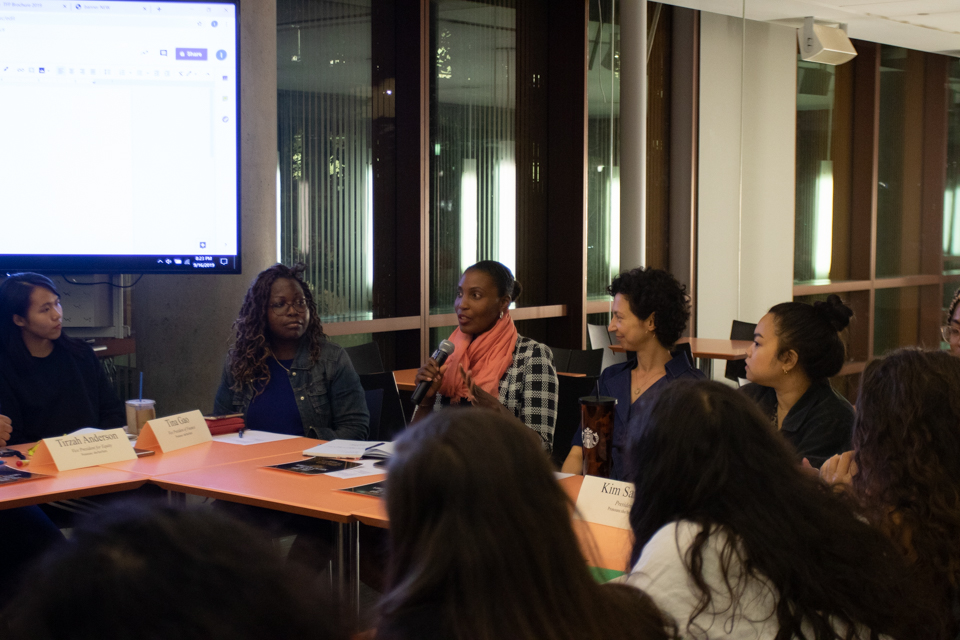 Deans Grinage, Lawrence and Friedman spoke to SGA for the first time since assuming their new roles within Barnard’s administration in August.

Dean of the College Leslie Grinage and Deputy Deans of the College Alicia Lawrence and Natalie Friedman fielded questions from Barnard Student Government Association representatives on concerns regarding the “Feel Well, Do Well @ Barnard” campaign and the deans’ new responsibilities overseeing academic and student life programs at Barnard.

Grinage, Lawrence, and Friedman spoke to SGA for the first time since assuming their new roles within Barnard’s administration in August. This broad restructuring of Barnard’s administration came after Grinage’s appointment in April, following a year-long search for a dean of the college. Lawrence’s role encompasses Residential Life & Housing and Student Life, while Friedman’s role now involves oversight over Student Success Programs, the Office of International Student Services, and a new area dedicated to family and parent engagement. This was Grinage’s first appearance at an SGA meeting.

President Sian Beilock announced the “Feel Well, Do Well” initiative at Barnard in an email on Sept. 3. The creation of the initiative stems from Barnard’s partnership with the Jed Foundation, a nonprofit organization dedicated to improving the mental health of young adults. Barnard’s partnership with the organization follows that of Columbia, which announced the creation of a steering group on mental health following the completion of an assessment of student well-being and resources on campus.

When asked about the initiative, Grinage said that Barnard is taking steps to help students outside the classroom in order for them to thrive within the classroom.

When pressed on the specific and tangible aspects of the initiative by Representative of Academic Affairs Jasmin Torres Pinon, BC ’21, Grinage stated that the program had just rolled out this semester and was still in the process of being developed.

In response to student concerns that faculty members are unaccommodating of the impact of mental health issues on academic performance, Grinage said that the faculty may need more awareness regarding how to best address student well-being. She added that the campaign should begin to tackle some of these questions. However, there are currently no plans in place in regards to mandatory training for faculty members, according to the administrators.

Grinage noted that students who face such resistance from faculty members should speak with their class dean or the executive director of student health and wellness, Mary Joan Murphy. Additionally, Grinage emphasized that “Feel Well, Do Well” will take time to develop within the classroom, as does any shift in culture.

“There’s not a handbook,” Grinage said. “The training is informational and teaches how to play the role of a support to students.” Grinage also emphasized that the initiative’s intention is not to force students to do the heavy lifting.

SGA turned the conversation toward broader concerns surrounding mental health, discussing Barnard’s short-term counseling and how students who have taken a leave of absence need more emotional and academic support as they transition back to Barnard. Grinage stressed that students’ needs must be determined on a case-by-case basis.

Lawrence, who will serve as interim Title IX coordinator, also addressed the search for a new executive director of equity and Title IX coordinator following the departure of Molree Williams-Lendor this Friday. She stated that a search will soon be underway, and Grinage assured student representatives that they, along with other constituents in the community, will have the chance to participate in interviews.

In response to Barnard’s administrative restructuring, SGA representatives also referenced confusion among students regarding who to contact in light of different concerns or requests. Emily Ndiokho, CC ’22, suggested that new or interim administrators hold office hours at the start of the year to increase face-time with students.

Grinage, Friedman, and Lawrence noted that the recommendation was “a good idea,” and said that they would continue to discuss the topic.