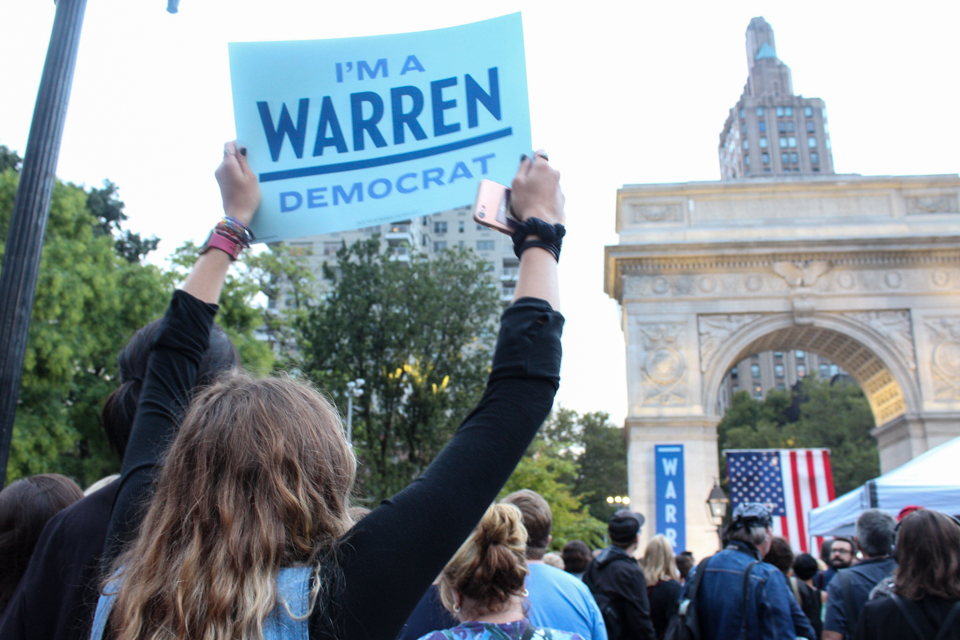 Last week, students flyered on campus and in Morningside Heights for the rally and organized groups to attend the rally together.

Last week, students flyered on campus and in Morningside Heights for the rally and organized groups to attend the rally together. Historically, Columbia students have been known for their political involvement and outspokenness, frequently engaging in protests around issues like freedom of speech, racial inequality and profiling, and anti-Semitism.

As election season approaches, students have begun to engage with specific candidates; students recently formed Columbia for Bernie to back presidential candidate Bernie Sanders. Other groups, likeColumbia Votes, aim more broadly to educate and encourage students to vote. Since 2016, various student-led political groups have hosted a Voting Week during which they assist students in registering to vote.

The audience lined the circular park as Warren, dressed in her iconic purple blazer, spoke in front of the Washington Square Arch. Those in attendance chanted “Dream big, fight hard,” throughout the rally.

Several Barnard College for Warren members, who are also first-time presidential voters, noted it was important for them to learn about different candidates’ policies in order to make an educated decision.

Lily Clurman, BC ’22, who helped coordinate Barnard College for Warren, said that 40 students attended the group’s first meeting and that 25 students signed up to attend Monday’s rally.

“Warren has centered some of her most important campaign plans around student debt, as well as the future for young people regarding the environment,” Clurman said.

Bella Mannray, BC ’23, said that Warren, as both a woman and politician, aligned closely with her values.

Columbia for Warren also organized groups of students to attend the rally.

Requiring all meetings between lobbyists and public officials to be made open to the public.  Making tax returns public for any candidate running for political office.  Providing down payment assistance to first-time homebuyers in historically redlined communities.  Abolishing all federal private prisons. Ending coal use to protect Native American reservations and land.  Stopping corporations from selling access to federal lands and national parks. Providing universal childcare and pre-K, and raising wages for childcare workers.

Prior to taking selfies with attendees, Warren said she wants to make substantial structural changes within the current political climate.

“I am not afraid, and you can’t be afraid either, so if you’re ready to fight, join me,” Warren said. “Dream big, fight hard, and win.”