Amid conversations about childcare, campus space, rifts in University Senate come to light

Amid conversations about childcare, campus space, rifts in University Senate come to light 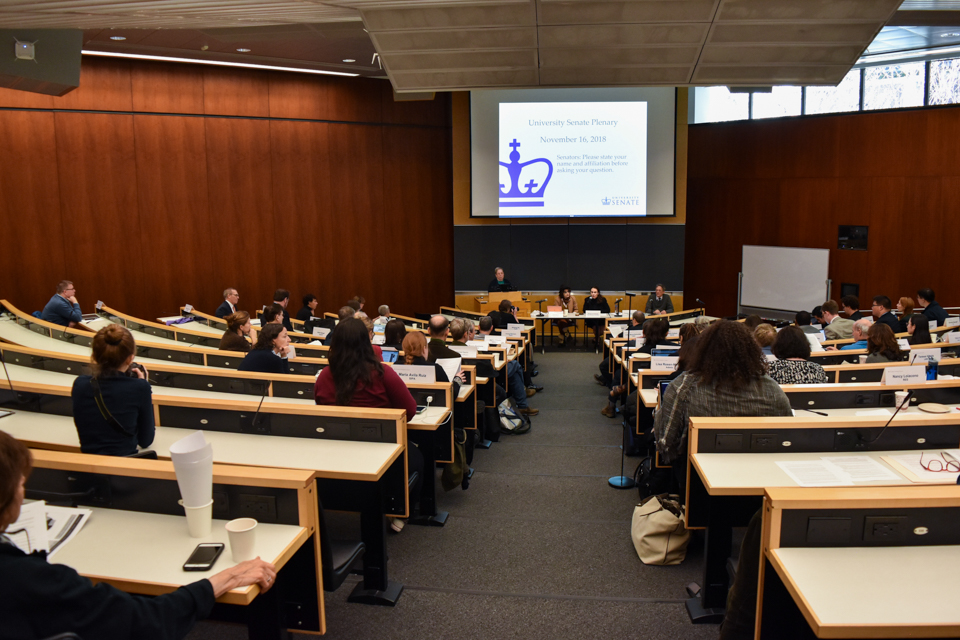 In light of the debate, other senators also questioned the exclusivity of faculty who participate in the vote for the chair.

In a contentious start to the semester, student and faculty representatives questioned the senate’s ability to accurately represent its constituents’ voices at the first plenary last Friday, citing inconsistently-enforced senate policies, distant communication with University administrators, and the exclusion of non-tenured faculty amid tense conversations around childcare policy and resources for postdoctoral workers.

A University-wide governing body with the power to affect policies across all schools within Columbia, the senate was originally established in 1968 to serve as a conduit between students, faculty, and administrators. However, due to closed-door meetings, lack of attendance at senate plenaries, and disconnect between senators and central administrators, faculty and student representatives have questioned whether the governing body can accurately represent and communicate important decisions to its constituent bodies. Tensions came to a head last year as student senators contested the unauthorized revisions of the undergraduate-faculty relationship policy and a lack of clarity on the progress of the graduate-faculty relationship policy.

Friday’s meeting saw a resurfacing of questions regarding the inner workings of senate policies, particularly in light of a recent vote for the chair of the executive committee of the senate, a notoriously opaque body tasked with setting the agenda of meetings, organizing the body’s specialized committees, and communicating with University President Lee Bollinger on pressing issues.

Former executive committee chair Sharyn O'Halloran introduced the meeting by calling for Jeanine D’Armiento, a CUMC professor recently elected to the role, to immediately step down from the position until another vote could take place.

Citing confusion around communication regarding the election, inaccessible candidate statements, and the fact that the election proceeded without reaching the required minimum vote for major Senate decisions—also known as quorum—O’Halloran criticized the integrity of the voting process.

“If we are going to be the University Senate that represents all the constituencies, we must make sure that the person heading this is truly elected in a fair and proper manner,” O’Halloran said. “To maintain the integrity of the senate election process, it is crucial to the credibility of the senate that we follow the law, follow the code, and in fact be fair and proper.”

According to senate administrators, the vote for the chair of the executive committee rarely reaches quorum. When asked why she brought these concerns to light at the most recent meeting, O’Halloran emphasized the need for rules and policies to be consistently followed so that personal relationships between colleagues do not call into question the legitimacy of the election.

O’Halloran declined to comment on whether personal relationships impacted the recent election for chair.

In light of the debate, other senators also questioned the exclusivity of faculty who participate in the vote for the chair—in order to be eligible, senators must be tenured faculty members.

Greg Freyer, professor of environmental health sciences and a member of the executive committee, emphasized the importance of the inclusion of diverse voices during the voting process.

Several senators urged the committee to continue with the other business brought before the senate rather than focus on perennial issues of election policies and quorum that could be solved behind closed doors.

The body immediately proceeded to vote on changing the name of the department of pharmacology, but could not pass the movement due to the lack of senators present—only 62 voting members voted in favor of the decision, which required a supermajority of 63 senators.

The senate also broached conversations regarding effective representation of constituents. Senior research scientist Daniel Savin cited the irony that more post-doctorate students and associated researchers participated in the vote to unionize than have ever participated in a vote for the Research Officers Committee, a unit within the senate directly charged with postdoctoral students’ and research officers’ work conditions.

“PARS do not believe that the senate is an effective tool of advising, and therefore were looking for a better avenue to represent themselves on campus,” Savin said. “They were not satisfied with what the University Senate was able to provide their constituents.”

He went on to advocate that the senate better advocate for its constituent base.

John Donaldson, head of the Committee on Campus Planning and Physical Development, also highlighted concerns regarding a disconnect between senate committees and administration, pointing to a lack of clarity over how spaces in Manhattanville will be allocated. Donaldson cited the development of the McDonald’s formerly on 125th Street into a possible hotel without consultation of faculty or students.

“As you have probably noticed from reading the Spectator, there are not enough classrooms to convert, there is not enough medical space for postdocs and associate scientists, etc. etc., but we are building a hotel,” Donaldson said.

Also discussed were plans to execute several initiatives such as salary equity for staff researchers and the advocation for a student health center near the Morningside Heights campus, in addition to amending a current policy regarding parental care and its effects on faculty. The new policy would remove the two-year cap on the length of parental leave given to faculty in addition to extending the tenure clock—the length of time given to faculty to apply for tenure—for tenure-track faculty past a two-year maximum, and instead calculate both based on the number of births within a family.

In the past, faculty have cited numerous challenges in raising children while also maintaining a rigorous academic schedule such as insufficient financial support provided by the University for faculty parents. However, due to confusion in the wording of the policy that inaccurately suggested the length of leave would be determined by number of children delivered in one birth, implying that faculty who give birth to triplets would be given a longer leave than those with a single child, senators agreed to table the vote until changes could be made.