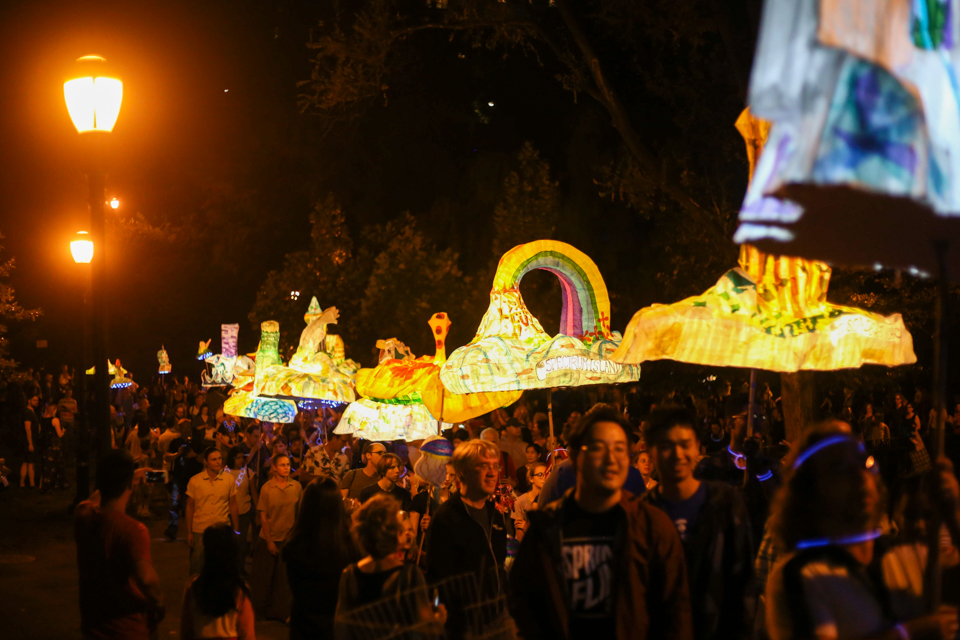 In its eighth iteration, Morningside Lights featured 50 lanterns that cast a colorful glow across the park.

Hundreds of students and locals of all ages lit up Morningside Park with tropical lanterns on Saturday in an annual procession that ended in front of Low Library.

In its eighth iteration, Morningside Lights featured 50 lanterns that cast a colorful glow across the park. Aiming to connect the community and promote art for people of all ages, the festival included workshops—open to both Columbia students and the surrounding Harlem community—that instructed attendees on how to make the lanterns, which they later paraded during the procession. This year, the island theme was inspired by the Year of Water initiative, a year-long, campuswide project hosted by the University to promote research, art initiatives, and lectures on the topic of water.

Long perceived as being unsafe after dark, Morningside Park—⁠located off Morningside Drive⁠—forms a natural division between the University and Harlem. The park’s reputation has garnered the attention of administrators and prompted discussion on public safety. The safety concerns at the park led the University to install signs delineating Broadway and Lenox Avenue and to include patrol officers in the park in 1974 to direct Columbia affiliates to campus.

When the University attempted to create a gymnasium at the site that would not be accessible by local residents in 1968, the park itself was at the center of student protest, which leveled criticism at Columbia’s expansion into the community. Seven hundred people were arrested, but their attempts worked: Columbia suspended construction and the park was saved.

Attendees did not see that side of the park during this year’s procession. Volcanoes, waves, islands, palm trees, and fish decorated the streets as the crowd looped around to Amsterdam Avenue before spilling onto College Walk. Each large lantern had LED lights affixed to the bottom to bathe the procession in blue light. The majority of participants came from the University and surrounding neighborhoods, but a number of attendees traveled from distant boroughs such as Queens and the Bronx.

Kyra Beemsigne, a nine-year-old from Queens, led the procession dressed in a hula skirt and flower leis intertwined with fairy lights. Beemsigne said she and her mother traveled all the way to 116th Street for the opportunity to design her own lantern and join in on the festivities.

Several students and residents found the event to be a chance to better connect with Morningside Heights.

Joyce Cheng, SPS ’20, who crosses through Morningside Park to get home at night, said she finds the park to be dangerous but that the event helped her see the area in a different light by facilitating interactions between students and the broader community.

“As a graduate student, there’s not enough opportunities for us to get involved with the campus and community,” Cheng said. “But this event bridges that gap.”

Katie Cangelosi, BC ’72 and current Morningside Heights resident, said she felt nostalgic for her first year at Columbia, when students fought to unify divisions between Columbia and Harlem residents when the park was threatened.

“[The procession] keeps the neighborhood alive—it’s symbolic of change and opening up of Columbia’s history with the community,” she said.

Third-time attendee, Moshab Rahman, SEAS ’23, said the event was a tradition for him and his friends. This year, he and his friends created a lantern depicting “Mother Earth,” in tune with the island theme.

However, Rahman said that despite the event’s intentions to unite different communities in a historic location, he rarely notices participation from local residents without connections to the University.

“However noble intentions the Arts Initiative had initially, it's become an event for upper-class people. I rarely see people from the Harlem area come into the [lantern designing] workshops,” Rahman said.