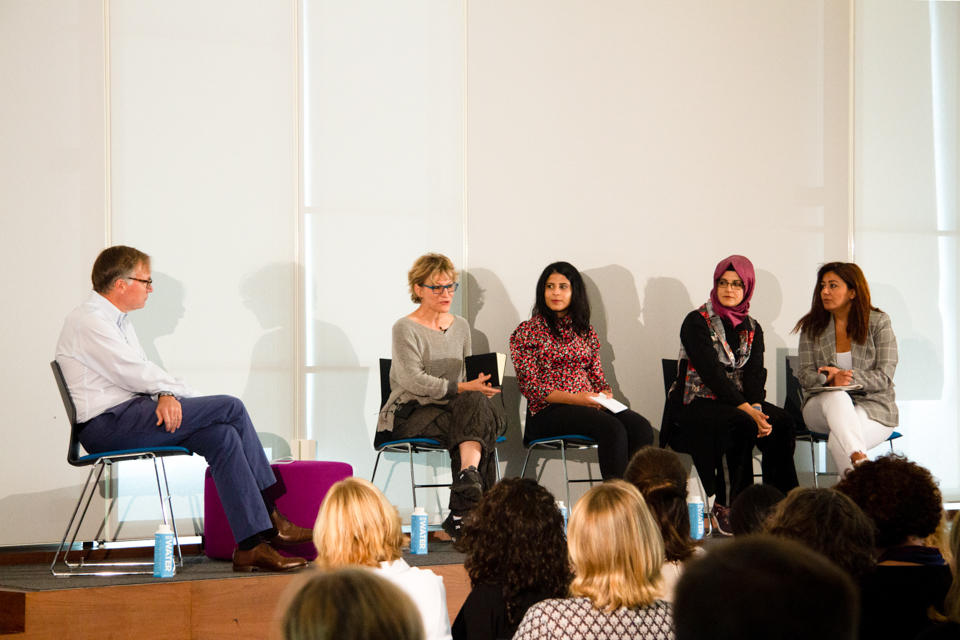 At the panel, Hatice Cengiz, Khashoggi’s fiancee and an outspoken advocate on behalf of the slain dissident, also joined Saudi activist Lina al-Hathloul and Dean of the Journalism School Steve Coll.

U.N. human rights investigator Agnès Callamard denounced the slow progession toward justice for Saudi journalist Jamal Khashoggi on a panel at the Journalism School on Friday, criticizing a lack of response from both the United Nations and other international forces just days before the first anniversary of the dissident’s murder in Saudi Arabia’s Istanbul consolate.

Khashoggi’s death last October has garnered significant international controversy, particularly in light of claims that the highest levels of the Saudi royal court are responsible for ordering and covering up the assassination. Callamard, whose investigation on behalf of the United Nations presents the most detailed and authoritative evidence on the matter to date, has since dismissed a domestic trial of 11 suspects as a sham due to a lack of transparency in legal proceedings.

University President Lee Bollinger, an established free speech expert, has written and spoken extensively on the topic, condemning the lack of response from the United States as a negative precedent for principles of free expression.

At the panel, Hatice Cengiz, Khashoggi’s fiancee and an outspoken advocate on behalf of the slain dissident, also joined Saudi activist Lina al-Hathloul and Dean of the Journalism School Steve Coll, who moderated the conversation.

“I’m glad to be here today to discuss the unresolved, ongoing conversation around someone … who was a professional friend of mine, someone who I admired enormously and whose loss I still feel,” Coll said in his introduction.

In January 2019, Callamard, who serves as both U.N. special rapporteur and director of the Columbia Global Freedom of Expression initiative, initiated the investigation into Khashoggi’s murder in response to what she criticzed as “the inaction of the U.N. and the seeming inability of the U.N. to play a meaningful role in what was becoming an international crisis.”

After interviews with more than 100 people in eight countries, she and her team issued a 100-page report made public at a human rights council in Geneva this June, outlining evidence of Saudi corruption and condemning the continuing failure of Saudi officials to acknowledge their responsibility in the “premeditated, organized plan of execution.”

“To this day, the state of Saudi Arabia has … failed to acknowledge the multiple victims of the killing, including Hatice Cengiz, who is here today,” Callamard said, calling on Saudi Arabia to make the proceedings against 11 suspects open to the public.

When asked about her reaction, Cengiz first and foremost lamented the loss of her fiance, and added that she was deeply disappointed by the process undertaken by Saudi officials.

While denouncing the lack of action from certain European states, she also praised the bipartisan effort undertaken by both the U.S. Senate and Congress, even in light of Trump’s denial of Saudi responsibility.

Al-Hathloul, whose sister Loujain al-Hathloul was tortured and imprisoned for her activism surrounding Saudi women’s rights, also emphasized the need to hold Saudi officials accountable for their human rights violations.

“The same ones who killed Khashoggi are the same ones who have tortured my sister … It’s just a little group in Saudi Arabia who has been abusing their power, and it’s something I want to stop now.”

She noted that she has become more outspoken on the subject, emphasizing that she initially did not want to be called a dissident.

“I’m not, I’m really not [a dissident], I’m just seeking justice,” she explained. “I’m not trying to reform everything and change everything; I’m just trying to give civil society more freedom.”

During the Q&A portion of the talk, Knight First Amendment Institute Founding Director Jameel Jaffer also highlighted his team’s work in investigating the United States’ failure to warn Khashoggi. According to an investigation by the Washington Post, the U.S. government received communications in the weeks before the assassination regarding a potential threat to Khashoggi’s life.

Citing Saudi Arabia’s abundant oil sources and financial capital, Callamard said that in this particular crisis, justice would require international political pressure and the will to stand up for human rights over geopolitical challenges.

“If people ever believe you can get away with murder in that fashion, that is sending the completely wrong message to the world which is already so intolerant to dissenting voices,” she said.