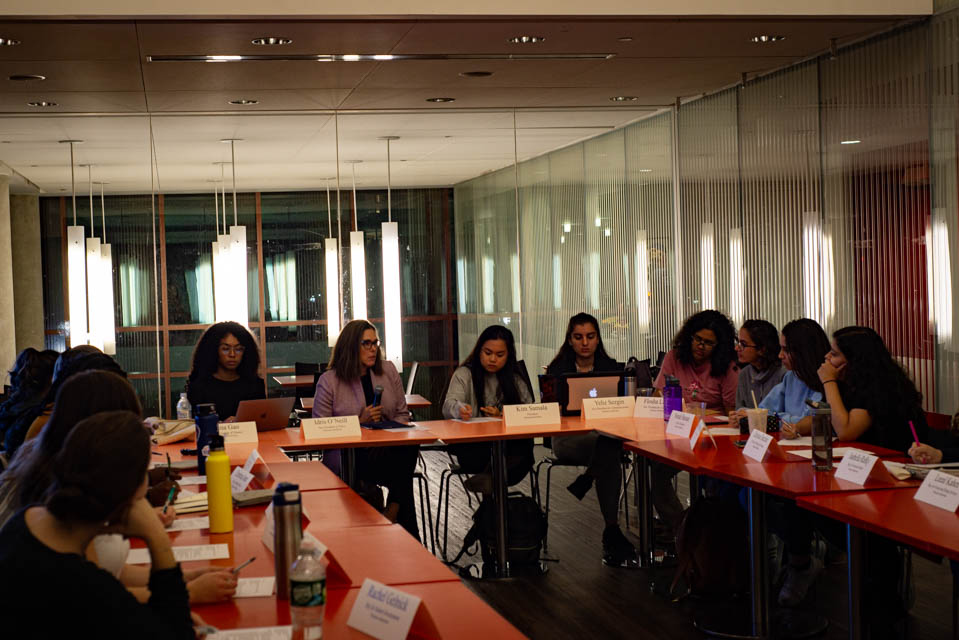 Beilock, who is now in her third year as president after starting the role in 2017, fielded questions from student representatives about health and wellness on campus, as well as the possibility of recognizing Indigenous Peoples’ Day at Barnard.

Barnard President Sian Beilock outlined her goals for the Feel Well, Do Well @ Barnard initiative and the Community Safety Group, which was created to review Public Safety procedures and trainings, during an appearance at the Barnard Student Government Association’s meeting on Monday night.

Beilock, who is now in her third year as president after starting the role in 2017, fielded questions from student representatives about health and wellness on campus, as well as the possibility of recognizing Indigenous Peoples’ Day at Barnard.

Beilock, a cognitive scientist by training, has made improving physical and mental well-being on campus one of the major goals of her presidency and announced the “Feel Well, Do Well” initiative in September. The initiative was developed as part of Barnard’s partnership with the Jed Foundation, a nonprofit organization dedicated to improving the mental health of young adults.

Beilock said that the initiative will focus on training faculty, staff, and students across campus to help and support each other, as well as on planning more community-wide events on campus.

“We need to make sure that we’re not just talking about health and wellness at Furman [Counseling Center] and in the health center. Everyone needs to be talking about what it means to be doing wellness your way,” Beilock said. “To have academic excellence and to be at your best in terms of thinking, you have to pay attention to what happens outside the classroom.”

Student representatives pushed Beilock to discuss how the Feel Well, Do Well initiative will incorporate concerns about community safety on campus. Last spring, Beilock announced the creation of the Barnard Community Safety Group, which was created to review Public Safety procedures and policies on campus after a black Columbia student was physically restrained by Public Safety officers in the Milstein Center for Teaching and Learning.

Beilock said that the Community Safety Group will lead a discussion this year centering on what it means to be an “open campus versus a less open campus,” and she encouraged students to participate in the dialogue surrounding community safety.

“I want [Barnard] to be a place and a campus where our community feels both comfortable and invited to be part of the dialogue. That’s the crux of safety for me,” Beilock said. “Our goal is to have a culture where Public Safety is supported and be clear about who is welcome on campus and who is not, and that’s where the Community Safety Group comes in.”

University Senate Representative Adara Rosenbaum, BC ’20, asked Beilock if there are plans to recognize Indigenous Peoples’ Day at Barnard. The holiday takes place every year on the second Monday of October—the same date as Columbus Day—and commemorates the shared history and culture of Native Americans. Although Barnard and Columbia exist on land that was once occupied by the Lenape people, neither currently recognizes the holiday.

Beilock said that administrators are discussing the possible ways to recognize the day and added that these plans could proceed regardless of whether or not Columbia chooses to do the same, though she did not specify a timeline.

“I don’t know the ins and outs of what can happen independently of Columbia’s [academic] calendar, but there are certainly things we can do to think about what we do on Barnard’s campus, and I would hope that it would be more than just a statement but an event that brings the campus together,” Beilock said.