“They don’t follow the rules”: Inside Barnard’s broken relationship with its employee union

“They don’t follow the rules”: Inside Barnard’s broken relationship with its employee union 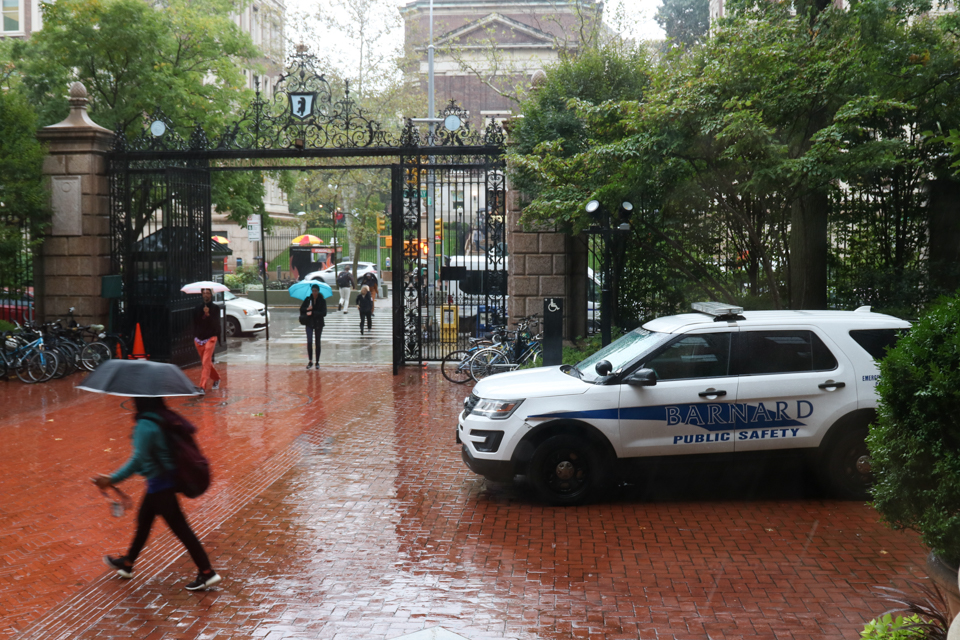 In light of concerns surrounding their contract, Barnard employees have described constant uncertainty regarding their job performance, compounded by a fear of retaliation that often prevents them from filing grievances in the first place.

At the end of September, the contract regulating wages, sick leave, and other policies between Barnard and the union that represents over 200 employees of the college—including Public Safety officers, dining service workers, and facilities staff—expired.

Alleging that Barnard has continually violated the contract and frequently delayed hearings to address violations, the Transport Workers Union Local 264 declined Barnard’s offer to extend the contract until November. Amid ongoing negotiations between Barnard and TWU, no contract currently exists.

TWU Local 264, which has represented Barnard employees since 1947, consists of four divisions: Housekeeping, Maintenance, Food Services, and Safety and Security. The relationship between Barnard and TWU is governed by a contract that is renegotiated every four years and gives the union exclusive rights to bargain workers’ conditions, wages, and benefits.

But the relationship between the union and the college has grown increasingly acrimonious, as evidenced by years of back-and-forth involving unannounced policy changes, a fired president, contract violations, and skyrocketing legal fees that threaten to bankrupt the union. According to TWU treasurer and Public Safety officer Rafael Vicioso, almost all of the union’s monthly budget of $4,000—and in some cases, their savings—goes towards legal costs.

In light of these concerns, union employees—who were granted anonymity in this article to protect their job security—have described constant uncertainty regarding their job performance, compounded by a fear of retaliation that often prevents them from filing grievances in the first place.

“I am afraid. I am always afraid. [Managers] can do whatever they want to do, and a lot of people don’t want to say anything, and those who do, it’s falling on deaf ears,” one employee in the Facilities department said. “If you say something, there’s a backlash, and you are given the most work or the dirtiest work.”

Asked to address the concerns that TWU members have expressed surrounding contract violations and the relationship between the union and the college, a Barnard spokesperson said that the college has offered 18 additional dates to meet with TWU in several off-campus locations and has suggested eight proposals for a new contract. “Barnard College recognizes and values the commitment of its employees who are represented by TWU and remains committed to the bargaining process,” the spokesperson said.

Despite the college’s promises, union members said that even with a new set of rules in sight, there is little evidence to show that Barnard would adhere to their own policies.

“They don’t follow the rules and they create an environment in which the rules, no matter what they are, Barnard doesn’t adhere to it. … They make stuff up as they go along,” said union president Orton Reynolds, who has led the union since 1995.

In June 2018, the union filed a grievance on behalf of a facilities employee that was disciplined after an inspection of their cleaning site. To the union’s knowledge, a 1999 policy clearly stated that managers could only conduct inspections of cleaning sites with an employee present and that the employee cannot be disciplined by their manager otherwise.

However, in a response to the grievance obtained by Spectator, the college stated that the employee had been present and that even if they had not, the policy was “no longer in use and has not been used or referred to in years.” Union members had not been notified of the policy change, the documents read.

As a result, the union filed a second grievance for a contact violation, citing the “failure of the Facilities Department to notify the union that it has decided to disregard usage or make a change to an existing procedure.”

Contract violations can take many forms, including failures to respect policies in the contract or to notify the union of changes to policies, such as in the case with the facilities employee. So far in 2019, 44 grievances for such violations have been filed, according to data obtained by Spectator.

Members expressed particular frustration with what they described as Barnard’s repeated tendency to change policies and notify the union afterward, compounded by the college’s delay in addressing grievances.

“The problem with filing a grievance is that a lot of us have been here for a long time, and it’s almost demoralizing,” said Vicioso, who has worked at Barnard since 1998. “You put in the grievance and it seems [to union members] like nothing ever happens.”

There are multiple steps in the grievance process, which ultimately aims to resolve an issue internally with meetings between managers and employees. If the issue cannot be settled, the complaint moves to external arbitration, which requires both sides to pay for an arbitrator—an expense ranging from $8,000 for one day of arbitration to, $12,000 for multiple days.

According to Vicioso, the union has spent more than $50,000 in legal fees and $20,000 in arbitration fees in the last two years, with an additional $15,000 outstanding in legal fees. Vicioso said that the union is not equipped to handle the high cost of these fees given its relatively small budget, which is pooled from monthly membership dues that cost $45 per member.

“We’re scratching by right now because of the sheer numbers,” Vicioso said. “We don’t have the resources Barnard does, so it seems like they’re trying to bankrupt the union by the situations that they themselves have created.”

In an effort to eliminate additional costs, union officers agreed in 2017 that they would no longer take their monthly “lost time” stipends—previously paid for with union fees as compensation for taking time to defend members in grievance hearings work on or other union activities.

In March 2018, Reynolds was fired from his role as a public safety officer at Barnard after more than 27 years. As the president of the union—a role that he still holds following his unanimous re-election in March 2019—Reynolds’ role entails being the main architect of the contract and defending his members in many grievance hearings.

Documents reveal that during a hearing on behalf of a recently terminated employee in November 2017, Reynolds asked to stop the meeting after expressing discomfort. After being pushed several times to explain why, he cited the “revealing” attire of a female employee present at the meeting.

In Barnard’s letter to Reynolds announcing his termination, Vice President of Campus Services Gail Beltrone wrote that he was found responsible for violating the college’s policy against discrimination and harassment and said that Reynolds could no longer work at the college because “Public Safety is our first line of defense, and any emergency we have necessarily involves the young women who place their trust in Barnard and Public Safety.”

However, in interviews with Spectator, Reynolds argued that Barnard did not follow its typical employee termination procedures which begin with a verbal warning and go through several levels of suspension. He acknowledged that he could have managed the situation differently but emphasized that he only gave a reason for his discomfort when he was repeatedly pushed to explain.

The union has since challenged his termination, first through arbitration and eventually to the Court of the Southern District of New York. Both concluded that Reynolds had been wrongfully terminated and should be reinstated as an employee.

Barnard challenged the rulings, and the case is now pending in a review court.

The Barnard spokesperson said that the college has been informed by the union that it will not agree to additional meetings to negotiate the contract because Reynolds is banned from campus. The college believes that Reynolds’ inability to attend meetings on campus should not be an obstacle to the negotiation process. 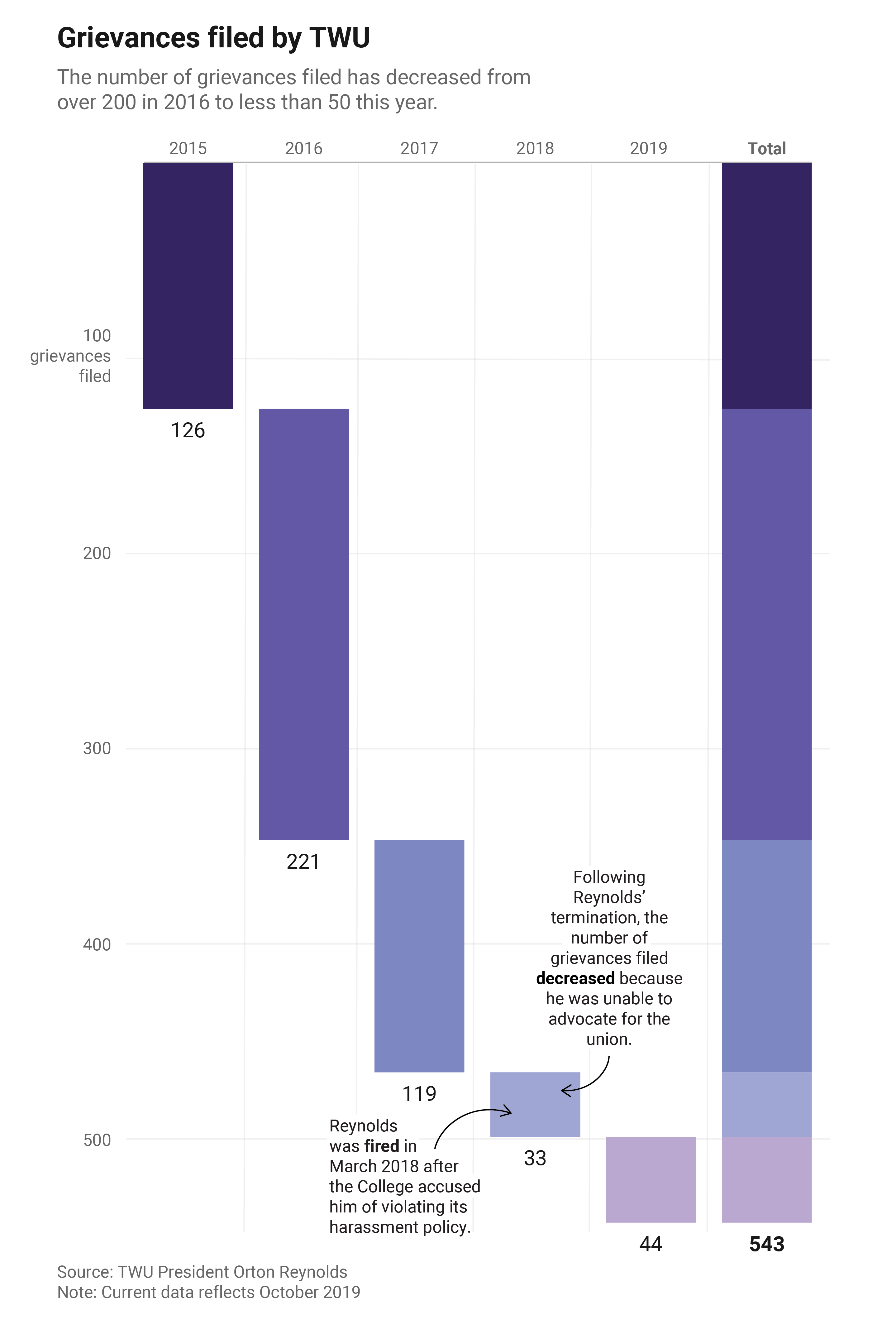 But with a president who is banned from campus and therefore unable to defend employees in grievance hearings, union members have pointed to a chilling effect on their willingness to file grievances. Reynolds has been present at only one grievance hearing since his termination in 2018.

“Without the president’s presence [on campus], people are afraid for their positions. Reynolds is one of the best things that has happened to us, and he doesn’t fight to fight—he fights for what’s right,” said David Pedrosa, the Executive Vice President of TWU and a superintendent in 620.

“Nobody feels comfortable submitting grievances, because of retaliation. The only time we do submit a grievance ... is because [Reynolds] was on it, and he would tell us to file grievances,” one Public Safety officer said.

Looking to the future

The two sides are currently under negotiation, with members seeking a means to hold the college accountable for contract violations. Some have proposed the idea of a strike in the coming months, though they emphasized that it remains a last resort due to both financial cost and potential widespread disruption on campus.

“I always look at a strike and a walkout as the nuclear option in labor relations. Sometimes the other side sees it as weakness, but it’s caution. But we are at a stage where [if] we don’t get what we want, we might reach that level of the nuclear option,” Reynolds said.

For others, especially in light of a lengthy, contentious history, a strike could pose the only possible option moving forward.