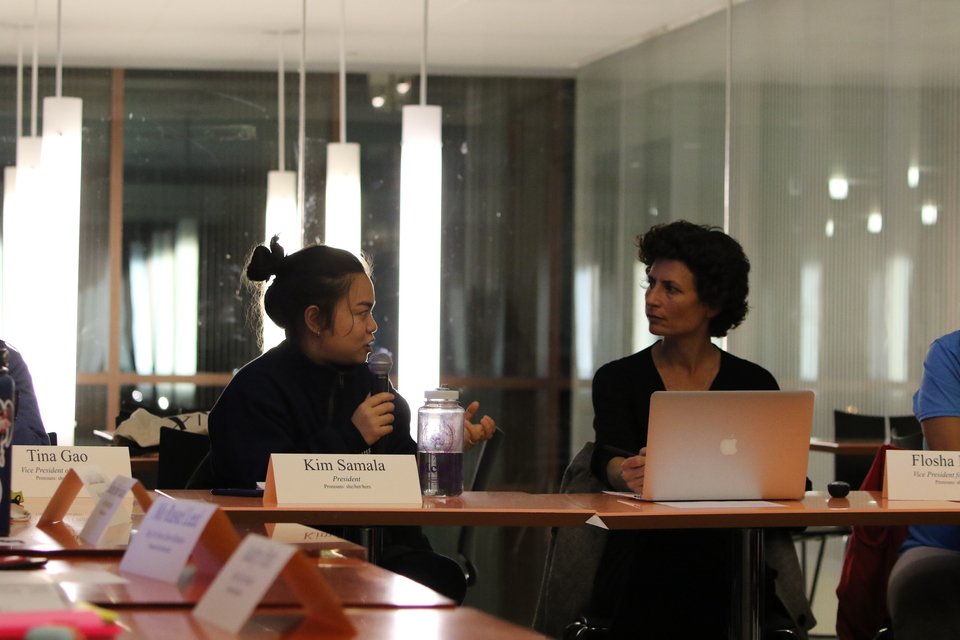 The Office of Sustainability and Climate Action was founded in response to findings and recommendations from the Barnard Presidential Task Force to Examine Divestment.

Goldmark also announced the creation of a full-time position for associate director of campus sustainability and climate action to facilitate the growth of the Office of Sustainability and Climate Action and its initiatives. The position is now occupied by Leslie Raucher, who has served as the environmental science program manager since 2013,

The Office of Sustainability and Climate Action was founded in response to findings and recommendations from the Barnard Presidential Task Force to Examine Divestment published in December 2016. In the divestment report, the Task Force called for a clear and public sustainability and climate action mission statement, a climate action plan, and creation of “personnel and budgetary structure” to achieve these goals. The office has been working on Climate Action Vision, a campus wide initiative that aims to provide opportunities for students and faculty to partake in and pioneer sustainability efforts.

Goldmark, now in her third year as director, highlighted three areas of focus for the program: academics, finance and governance, and campus operations and culture. Goldmark also announced a new “360° approach” for the program, a comprehensive take that cuts across all operations and is tailored to Barnard’s campus and mission. The approach prioritizes the role of women and marginalized communities in climate action, as these two groups will be most impacted by the effects of climate change. Efforts at Barnard parallel those made across the street at Columbia, with the 2020 Sustainability Plan on the horizon and the recent announcement of a new task force tackling climate change.

“I really strongly believe that in order to solve this crisis, we need people at the table who haven't traditionally been there,” Goldmark said. “I literally think we won't solve it unless we have interdisciplinary and intersectional solutions. So this is a big deal for everybody working on this.”

However, beyond plans to work with offices like Beyond Barnard and the Council on Diversity, Equity, and Inclusion, she did not specify what this involvement of women and marginalized communities would look like.

This holistic approach aims to push “collaboration and synergy” across different sections of campus. Goldmark gave the example of the newly established Office Outreach Program, in which the Office of Sustainability and Climate Action works with other Barnard offices to help them recycle and brainstorm for sustainability-oriented goals.

Goldmark also announced the creation of the Student Climate Action Grant, to which individual students or student groups can apply to receive funding for projects and initiatives relating to climate action. The grants, which range from $500 to $1,000, aim to allow students to take on new projects or develop existing programming tackling sustainability. Goldmark said she hopes the grant, which is funded by money earned at previous events and programs, will encourage students to take charge and make their voices heard.

“The power of students, of young people, in this college and in this movement cannot be understated,” Goldmark said.

Looking at next steps, Goldmark pointed to an emissions reduction plan, policies for sustainable purchasing and internal reuse—such as the Barnard FLIP Library—as well as additional work to be done on campus landscaping beyond the lawns.

In response to Goldmark’s updates, representatives also brought up concerns about additional labor for facilities and maintenance workers in regards to waste collection and recycling, bringing up unsafe disposal of glass, as well as move-in and move-out days as examples of times when there are an abundance of boxes and garbage.

“I remember vividly my floor being piled and piled up [with waste]. ... It is so intense and there is so much to be composted and saved and it isn't. It is an absolute overflow. And for the workers to put in that extra labor that day for the students,” Representative for Arts and Culture Isabella Rafky, BC ’22, said. “I wanted to put that out there as a really big deal.”

Goldmark said that she has met with the facilities team and they have voiced their frustrations with the lack of correct sorting of recycling bins, in addition to concerns about disposal of glass and liquids. Nonetheless, Goldmark acknowledged that this is an issue toward which more attention needs to be dedicated.

She also responded that the goal is an internal “circular economy” on campus regarding material goods, increasing the capacity of reuse programs like Rebear and getting people to think about the lifespan of daily objects they use.