‘The next chapter’: Despite history of alumni apathy, Bollinger-era initiatives drive newfound culture of engagement

‘The next chapter’: Despite history of alumni apathy, Bollinger-era initiatives drive newfound culture of engagement 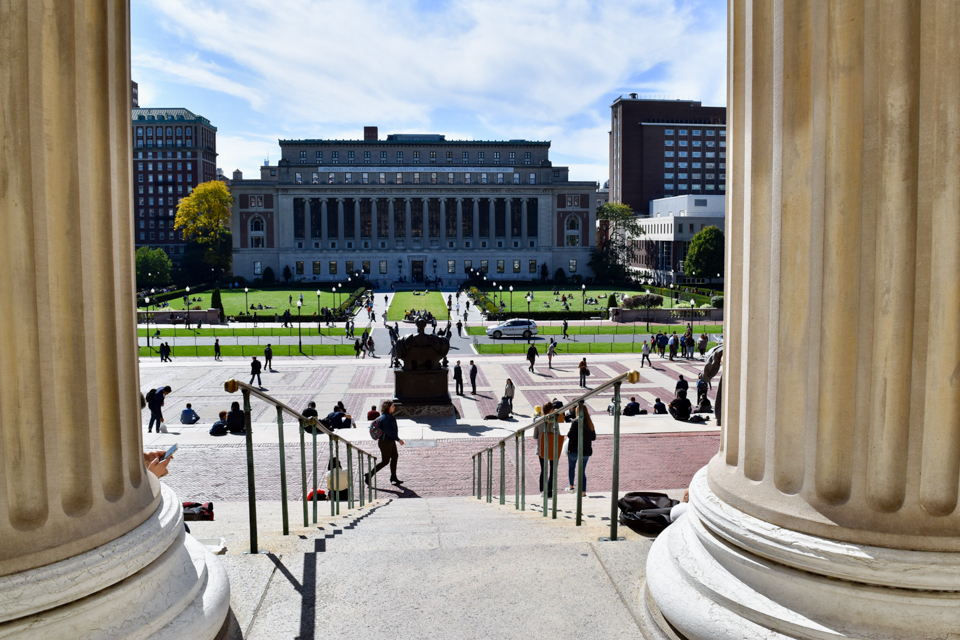 The celebration became one of the first landmarks of University President Lee Bollinger’s tenure during his time at Columbia, occuring only a year after he took office in 2002.

When the University’s 250th anniversary kicked off in 2003, everyone knew the yearlong celebration was the start of a new era for alumni engagement at Columbia, but nobody knew just how successful it would be.

“I think there was an optimism and a sense that change was coming, but I don't think anybody could have predicted all the things that have gone on in the past 15 years,” said Brian Krisberg, CC ’81, Law ’84, and former chair of the Columbia Alumni Association.

The celebration became one of the first landmarks of University President Lee Bollinger’s tenure during his time at Columbia, occuring only a year after he took office in 2002. The event came to represent a broader push to undertake the growth of alumni relations and a more Columbia-based community, one that—prior to the early 2000s—hardly existed at all.

“That was really one of the first times in living memory that a lot of alumni were hearing from the University-wide level without any fundraising ask,” said Jerry Kisslinger, CC ’79, GSAS ’82, the deputy vice president for strategic communications in the office of alumni and development. “That set a sort of different level of expectation that said we’re gonna be a place that you belong to—something much bigger than what you may have understood.”

According to University administrators and student and alumni leaders, a combination of Columbia’s contentious history with activists, its decentralized campus, the New York City setting, and a lack of post-graduation community have posed unique challenges to forming a unified alumni body across all schools. In light of these factors, Columbia saw a slow start in outreach to unengaged alumni who have little relationship to the University after graduation—evidenced by both relatively lower donation rates and a lack of connection to campus, activities, and students.

The effects of alumni development and engagement, however, are present in many aspects of daily campus life—in the form of financial aid, scholarships, and mentorship and networking opportunities, among others.

In 2004, the University Senate conducted an audit with administrators across various development offices to examine Columbia’s low alumni giving rate, highlighting the need for more investment in campus community and central, coordinated alumni outreach to both build and establish an alumni body. The Senate also revived its Alumni Affairs Committee, which had been inactive for five years, and the next year, the University Trustees founded the Columbia Alumni Association, officially bringing various alumni associations and regional clubs under a larger umbrella organization for the first time.

Since then, Columbia has made drastic moves to grow a central alumni network, bolstered by flashy events with the likes of high-profile alumni such as Ruth Bader Ginsburg, Law ’59, and expansive outreach across the globe—all outlined by a five-year strategic plan by the CAA that details the possibilities of further engagement until 2023.

The strengths of Columbia’s new efforts are also exemplified by its success on Giving Day—which rose to a record-breaking 22 million this year—in addition to Bollinger’s landmark $5-billion-in-5-year campaign, the Columbia Commitment. 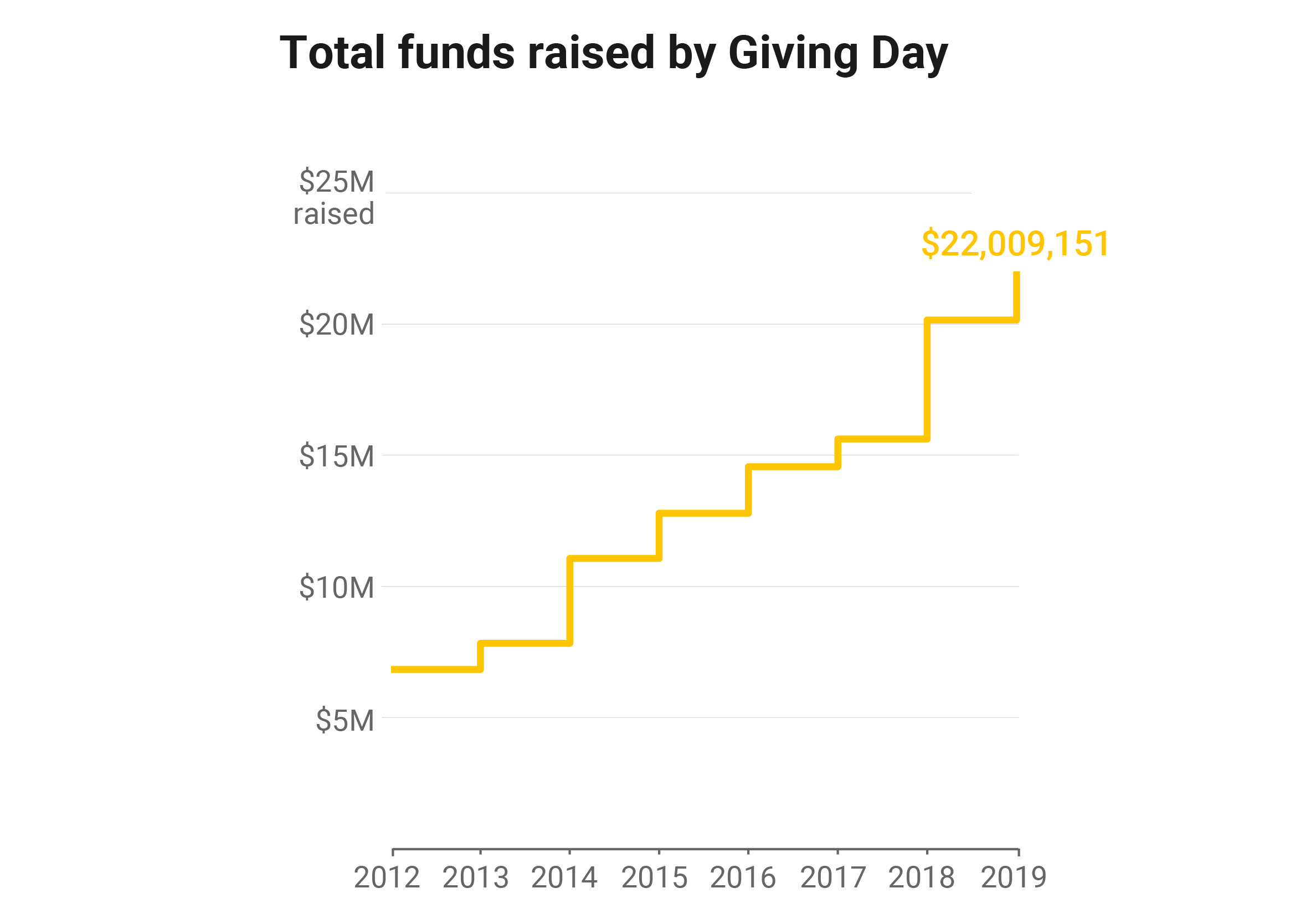 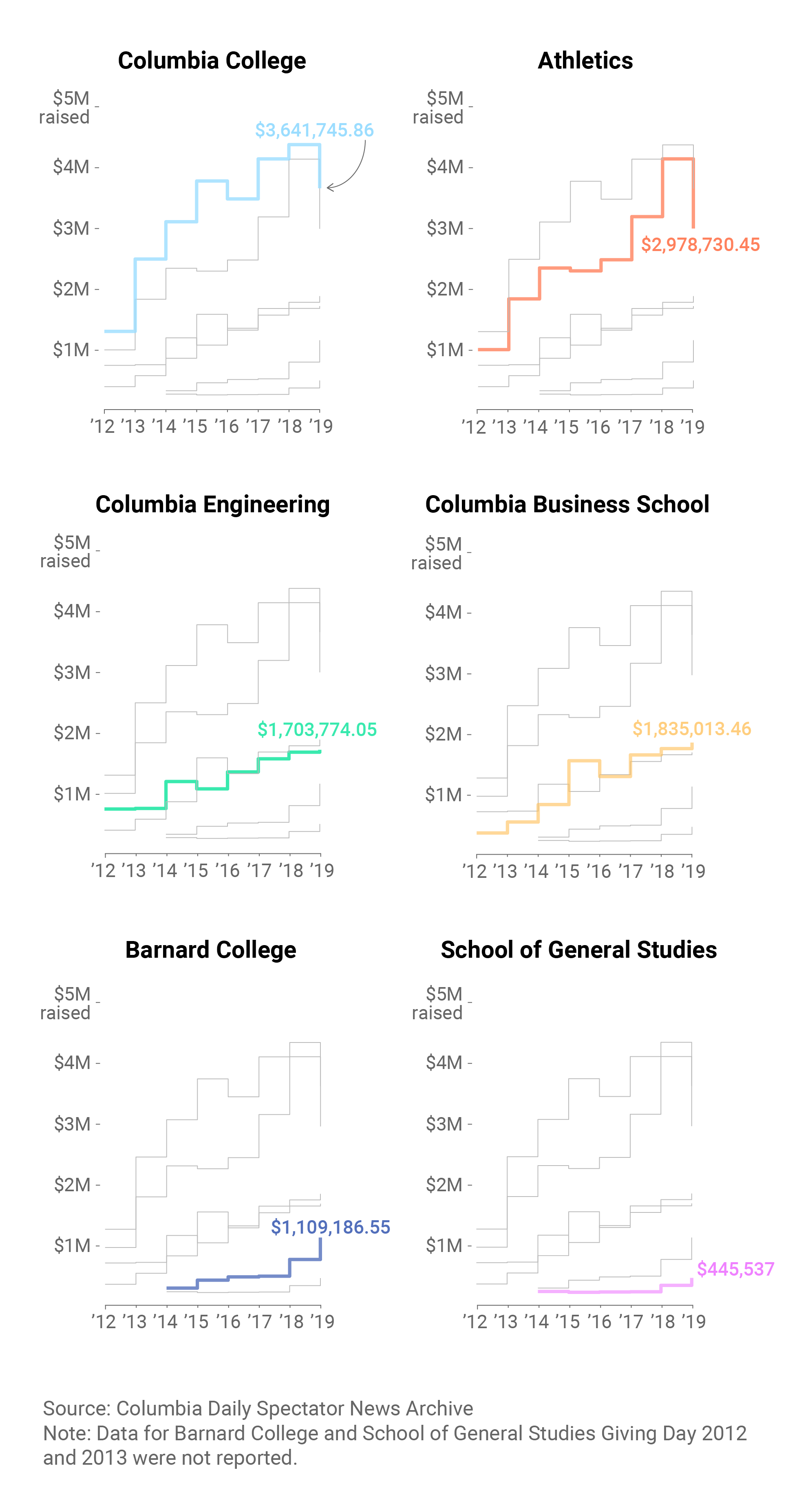 “You just can’t get away from the fact that Harvard has [a] $40 billion [endowment], and we have 10, 11, 12 billion dollars, and Stanford has 25,” Bollinger told the Spectator in an interview this October. “Columbia didn’t have the relationship with alumni, so we built it up, and now we have the biggest campaign in Ivy League history, and we were the third university to raise $1 billion in cash in a year. It’s now a major thing.”

Though historically, a number of compounding factors contribute to the University’s lag in alumni engagement, many administrators and faculty point to one period in particular—the student protests of 1968, where the NYPD, called by Columbia, used force to end the occupation of a number of University buildings—as the ultimate crossroads.

Columbia’s decentralized administrative structure also played a significant role. Until 1991, the School of General Studies, Columbia College, the Graduate School of Arts and Sciences, the School of International and Public Affairs, and the School of the Arts all maintained separate faculties under their respective deans until they were unified under into the single Faculty of Arts and Sciences. But unlike schools with a unified administrative body, Krisberg noted, Columbia’s structure does not enable a centralized alumni body.

“You run into somebody who went to Harvard, and they don’t tell you what division of Harvard they went to; they tell you they went to Harvard,” he said. “You run into somebody that went to Columbia, they almost always say, ‘What school did you go to?’ … It’s never just singularly Columbia. Our identity tends to be fairly tied up in the individual schools.”

After decades of little involvement from alumni, the first notable steps to focus on alumni engagement and giving were taken under the auspices of former University President George Rupp in the 1990s, when he extended the Campaign for Columbia amid concerns that the College would no longer be able to sustain need-blind admissions. At the end of the campaign in 2000, Columbia had doubled its alumni giving percentage from 18 percent to roughly 36 percent.

But alumni relations across the University were still weak and decentralized, particularly when compared to those at other Ivy League schools. When Bollinger arrived at Columbia in 2002, along with former executive vice president for University development and alumni relations, Susan Feagin, GS ’74, led efforts to improve the culture of alumni engagement at Columbia. Feagin led efforts to efforts to establish the Columbia Alumni Center on 113th Street, a suggestion made in the 2003 audit, as well as to create Columbia Magazine, which highlights Columbia alumni across the 20 schools. She was also instrumental in the creation of the CAA.

“There was a recovery period, and I think the Bollinger presidency marked a shift from recovery to really what’s the next chapter, and the CAA was a really important part of that,” Kisslinger said.

Prior to the CAA, Columbia saw little in regards to a central alumni database, which has since expanded to more than 355,000 alumni, according to data provided to Spectator. The CAA’s programming and alumni engagement opportunities has also expanded significantly to include direct mentorship through social networking and professional networking.

Since then, current President of the CAA Donna MacPhee, CC ’89, noted that the organization has seen phenomenal success despite its relative youth.

“We've been working hard to leverage the history of an institution that started in 1754 but, in many ways, be like a startup and entrepreneurial and think about Columbia today, both the alumni and the students, and for the future,” she said.

The increase in resources dedicated to alumni engagement and fundraising has been clear—according to the University’s tax forms, the amount spent on alumni engagement initiatives rose from nearly $30 million in fiscal year 2006, when the CAA was initially founded, to nearly $120 million in 2018. 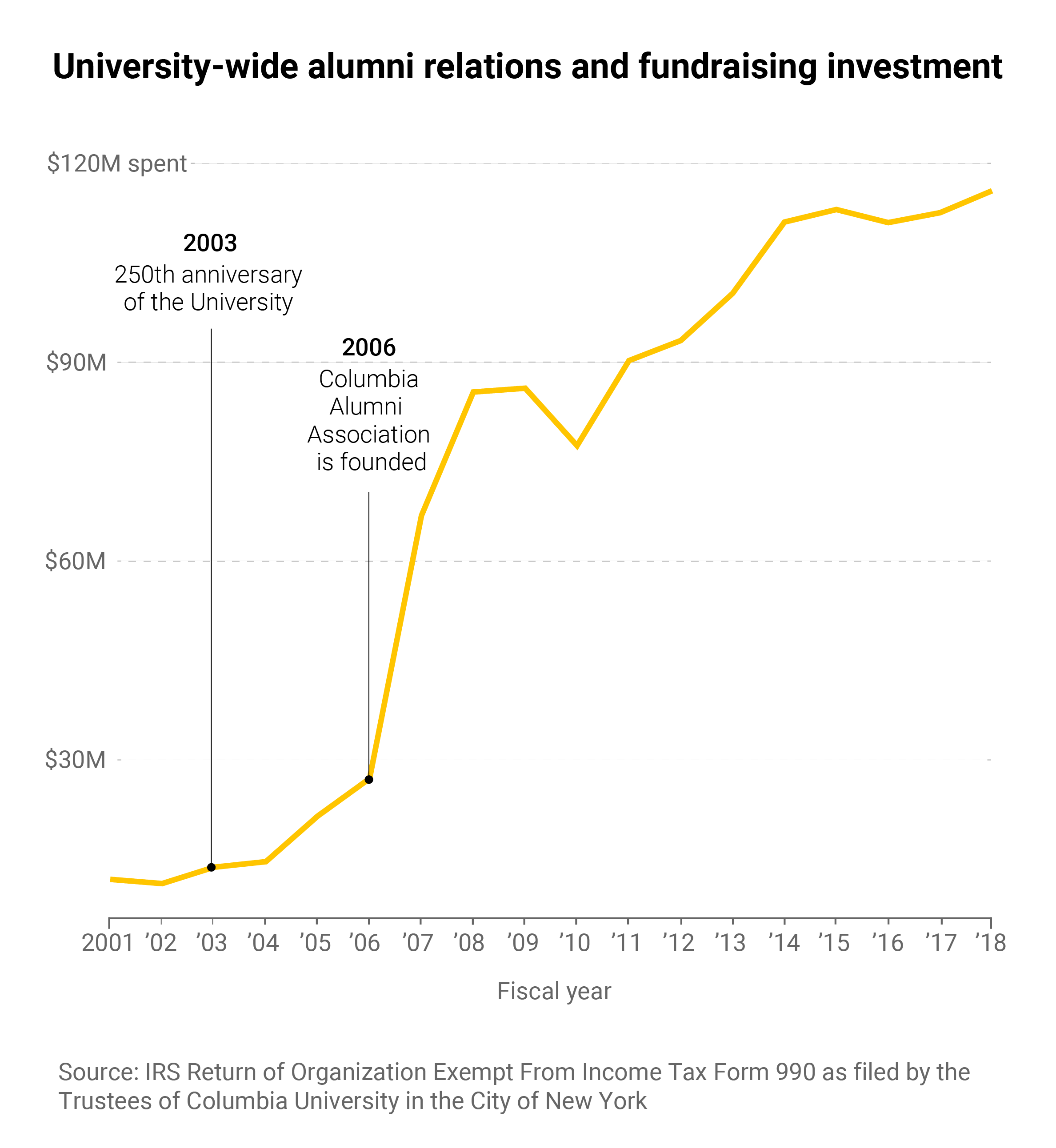 Nearly two decades after the 250th anniversary celebration, the CAA kicked off its “She Opened the Door” initiative, featuring a three day Women’s Conference last year that drew over 1,000 alumni, students, and faculty. The highlight of the conference: a discussion with Supreme Court Justice Ruth Bader Ginsburg, Law ’59.

In the period, the alumni community has grown significantly outside of New York City as well. Leonard Robinson, SEAS ’13, president of the Boston chapter of the CAA, said he’s seen a large growth in attendance at the chapter’s events in the past year and a half, including a recent event hosted by the Boston chapter after the Head of the Charles Regatta. There, over 80 alumni cheered on the Columbia crew team in a “homecoming away from homecoming.”

However, citing Columbia’s urban location, alumni and students still point to a disconnect with the community due to a lack of ties to Columbia’s physical campus. Clifford Kern, CC ’67, a donor in the Centennial Circle giving society, said that while he feels warmly about his time at the University, he doesn’t feel a need to stay involved through alumni events.

“[It’s] the pull of the city drawing away from the University so that everything doesn't revolve around the University the way it would in a place … where there’s not so much competing for your attention outside the campus,” he said.

To address these concerns for students still on campus, the CAA and the Senate Affairs Committee recently announced the creation of the Student Leadership Advisory Council, a body composed of two representatives from each of the University’s 18 schools.

According to Jacqueline de Vegvar, a Ph.D. candidate with the College of Physicians and Surgeons, who helped start the initiative, SLAC will allow students to directly engage with the CAA and speak to what they hope to receive from alumni engagement—fostering more opportunities to build individual mentorship, personal connection, and consistent communication.

University Senator and SAC’s other co-Chair Jonathan Criswell, GS ’21, highlighted the opportunities available for students to network with alumni in diverse fields and responded to a student perception that alumni events are a way of asking for money.

“You don’t want to engage with people who have been in your shoes and who have gone on to success? I think it’s a misunderstanding of what our alumni association does: They’re trying to help students to transition successfully post-graduation,” he said.