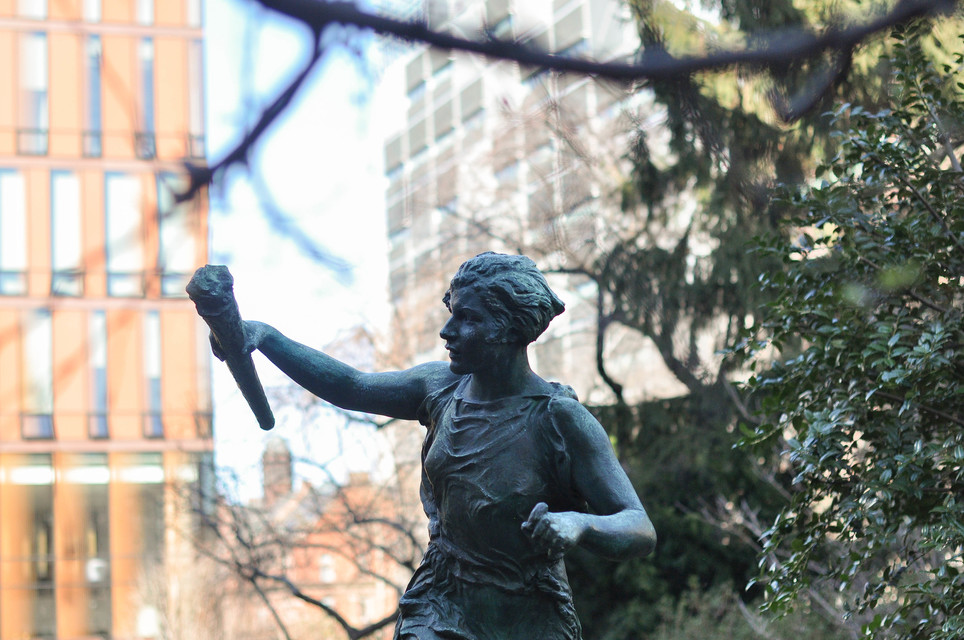 Barnard’s new wellness initiative “Feel Well, Do Well,” launched at the beginning of the fall semester, has become increasingly visible—including to prospective students and applicants to the college.

In light of the initiative’s increased social media presence, monthly themes, and an emphasis on outreach, some applicants to Barnard, who cite campus resources for health and wellness as an important factor in their college decisions, noted an awareness of the college’s commitment to student well-being.

On Monday afternoon, Barnard’s Student Government Association hosted a town hall on health and well-being on campus. Organized by SGA’s Vice President for Communications, Yeliz Sezgin, BC ’21, the session started with a presentation rooted in exploring the “Feel Well, Do Well” campaign led by Executive Director of Student Health and Wellness Programs MJ Murphy and Director of Furman Counseling Center Mary Commerford. The presentation detailed resources available through each of the three branches of Barnard Health: Primary Care Health Service, Furman Counseling, and Health Education.

First announced by President Sian Beilock in September, “Feel Well, Do Well” aims to focus on individualized notions of wellness, and to support students both in and out of the classroom, a goal that has been particularly apparent through the increased visibility of available resources. As part of the initiative, Barnard has partnered with the Jed Foundation, a nonprofit that works to support the mental health of young adults around the nation. Barnard’s partnership with JED follows that of Columbia in 2017, which has since resulted in a number of changes to Columbia’s mental health resources and policies.

“Feel Well, Do Well” was born out of a campus assessment conducted by JED in 2018 that culminated in a report highlighting areas for improvement regarding Barnard’s resources for student wellness. According to Murphy, the report noted that Barnard provides a robust mental health program for its relatively small size. However, it recommended Barnard improve its efforts to promote social connectedness, citing challenges caused by the college’s location in New York. The town hall marked the first time that any information contained in the JED report has been publicly shared.

In response to the envisioned implementation of suggested recommendations, Murphy highlighted the role of active collaboration in effective health and wellness services.

“You can’t promote mental health and wellness just from the mental health services division alone. That won’t work. It has to be a comprehensive model; it has to come from all these different avenues that students interact with,” Murphy said.

Barnard’s plan to dedicate more resources toward addressing mental health concerns on campus comes amid a national focus on levels of stress on college campuses. As college students increasingly seek resources for issues related to stress and depression, they also turn to their colleges for increased support and guidance, according to a report by the New York Times. In the article, admissions officials nationwide also cite an uptick in inquiries from parents and prospective students regarding mental health services and accommodations.

Though the “Feel Well, Do Well” initiative is only in its first semester, it is widely known and referenced, through videos introducing a new theme each month, and fliers in residence halls and affiliated events. Examples of past events include a Community Walk in Riverside Park, a Teaching Kitchen event, and free yoga classes. For applicants to the college, tours and admissions materials consistently highlight “Feel Well, Do Well.”

Grace Mwamba, an applicant from California, shared that the wellness resources have not been strongly promoted at other schools she has considered, and are a distinct feature of her knowledge of Barnard.

“When I went on my tour, I heard ‘Feel Well, Do Well’ a lot. When I went to the open house, it was really emphasized. And I don’t think a lot of other schools have been saying things like that.” Mwamba said.

Mwamba’s on-campus exposure to the initiative was echoed by Olly Ogbue, an applicant from Boston who attended Barnard’s fall fly-in program, Barnard Bound. Among the various programs available over the weekend was a panel during which a number of campus health and wellness representatives shared information on resources available to students.

“Barnard definitely has stood out as having a stronger emphasis, because during the panel they had people from different locations on campus, where [other institutions] seem like they have one place to go,” Ogbue said.

Clara Spray, an applicant from New Mexico, expressed awareness of the importance of an active emphasis on mental health resources on college campuses—an active concern in the minds of applicants.

“School is difficult—everyone knows that. For mental health, you need to be in the right headspace to be able to do all these rigorous activities,” Spray said.

Given the strenuous nature of the undergraduate experience, Mwamba says that a community focused on well-being is invaluable to succeeding on a college campus.

“It’s very important to create a safer, more comfortable environment for students, because a lot of kids start to feel suffocated and there’s not enough of an outlet to express yourself or get what you need,” she said.