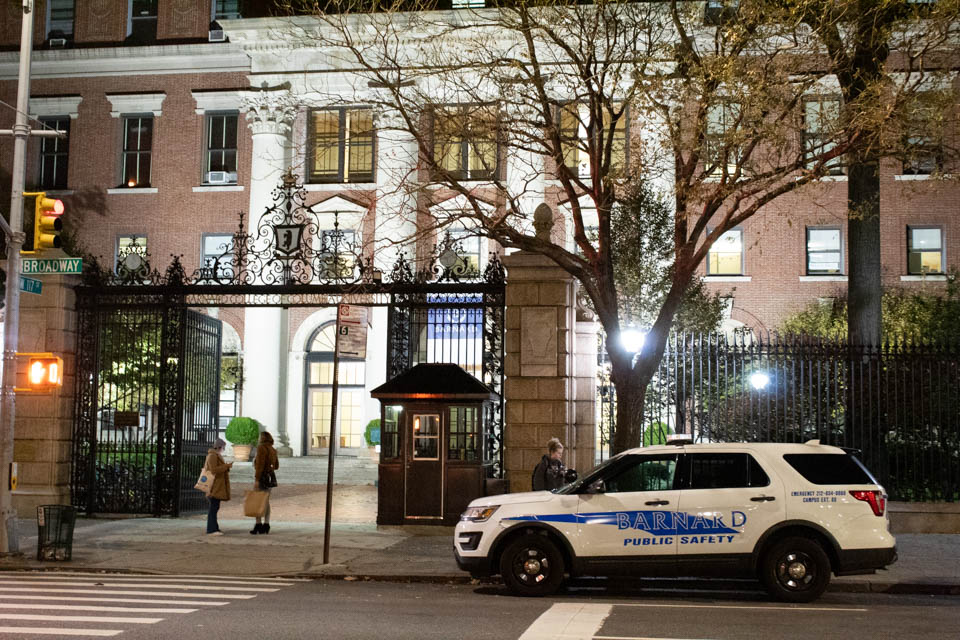 In interviews with Spectator, Barnard Public Safety officers, faculty, and students shared fundamentally different views regarding Public Safety’s role, policing on a college campus, and the meaning of safety itself.

When six Barnard Public Safety officers physically restrained Alexander McNab, CC ’19, against a counter in the Milstein Center for failing to show identification at the Barnard gates last spring, students and administrators alike called for a thorough review of the college’s campus safety policies.

Viral footage of the exchange showed McNab, who is black, pinned to the counter of Peet’s Coffee in Milstein, surrounded by onlooking officers and students. Following the incident, student protests argued that Public Safety should not see their role as guarding students against members of the Morningside Heights community, citing the underlying racial biases in such procedures.

In response, Barnard hired an independent firm to conduct an extensive review of the college’s Public Safety policies and created the Community Safety Group—which consists of 23 Barnard students, faculty, and staff—to discuss its findings. Published in August, the firm’s concluding 25-page report found that the officers involved were not racially motivated in responding to McNab. However, it highlighted a number of deeper structural concerns—namely, inconsistent or nonexistent policies for training, use of force, or day-to-day procedures. 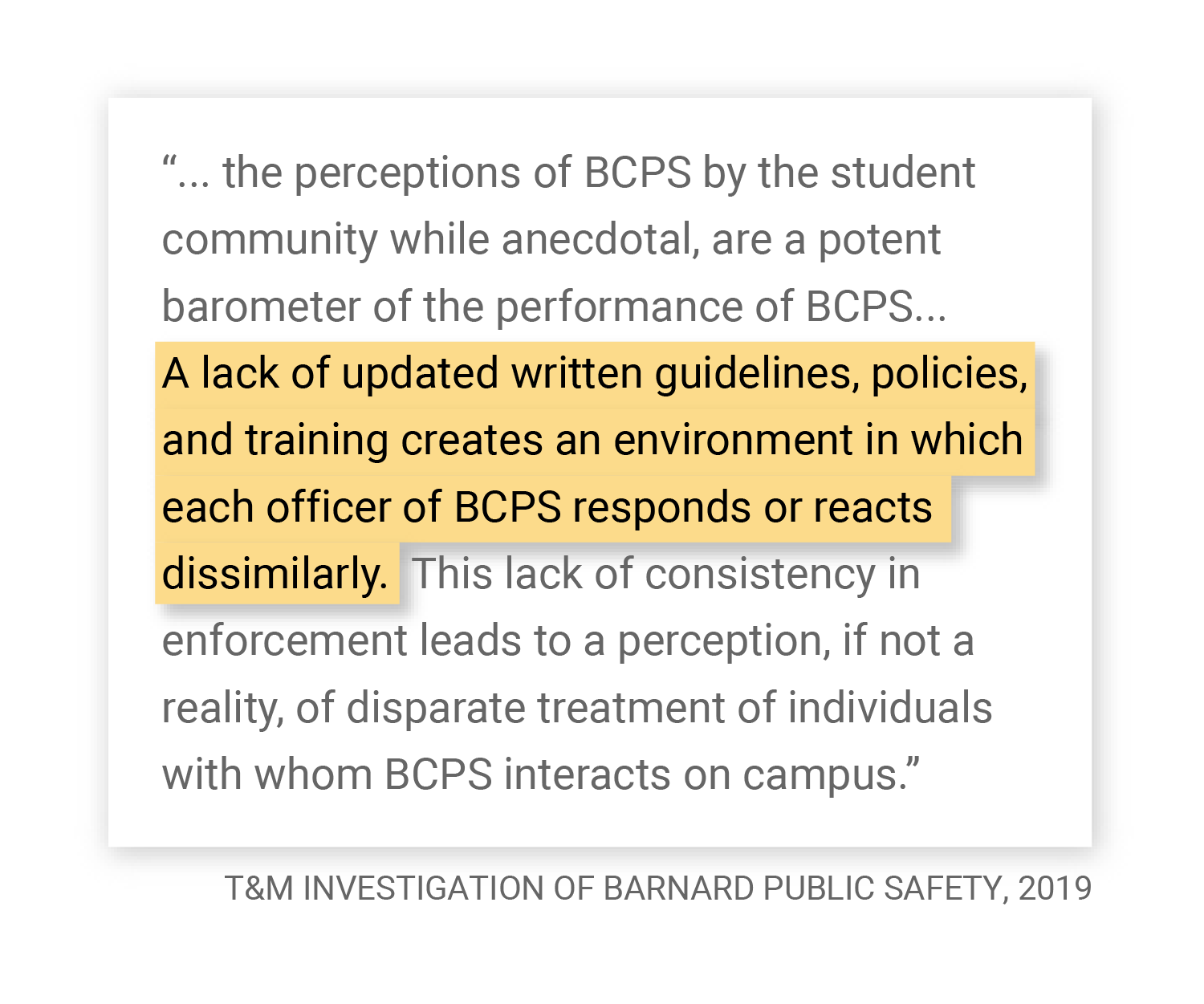 “What we witnessed in videos of the April 11 confrontation was deeply troubling and antithetical to Barnard’s mission,” President Sian Beilock wrote in an email that August.

But in interviews with Spectator in the months following the incident and the report’s release, Public Safety officers have maintained that they do not see a need for institutional change regarding their methods of maintaining campus safety.

Highlighting the small size of their team, the openness of Barnard’s campus, and a recent increase in their encounters with homeless people entering campus, officers have argued that a “high alert” approach—like the one taken with McNab—is necessary to protect the campus space from potential outside harm. Officers added that the investigation and college administrators have not provided a full picture of campus safety, hindering the Community Safety Group from guiding effective change. 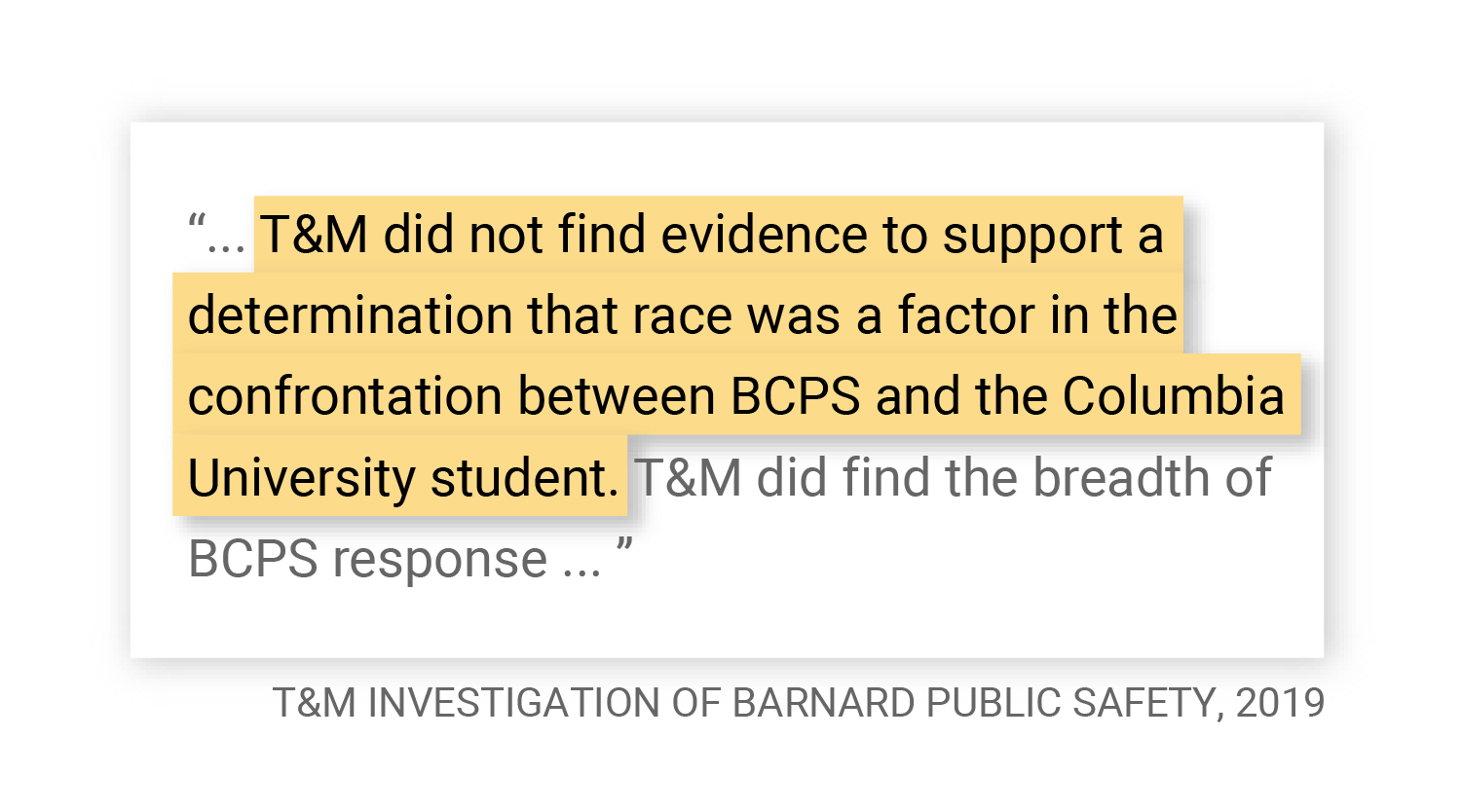 Ultimately, both sides reveal a fundamental tension rooted in contrasting beliefs regarding Public Safety’s role: While officers argue that their primary job is to act proactively and avert danger, students point to a greater need to redefine who should be considered a threat to safety.

Barnard declined to comment on the policies and progress of the Community Safety Group, or on the relationship between students, the administration, and Public Safety officers. All officers interviewed for this story were granted anonymity in order to protect their job security.

Citing the seeming discrepancies in how Public Safety officers responded to McNab, Chelsea Sinclair, BC ’21, said that the treatment of Alexander McNab is representative of the different treatment that black students at Barnard and Columbia experience on a daily basis.

“I had a very visceral reaction to it,” said Sinclair, a member of the Community Safety Group. “I was really upset, [and] I felt like there was unnecessary force used, it’s not a one-off thing … It’s the principles of the situation. I’ve seen that so many times, but it was really upsetting to see them use force.”

Yet to many Public Safety officers, members involved in the incident were just following procedure when they restrained McNab. A Public Safety officer who was not present on the scene said that he saw no problem when he watched the video, citing a need to be more alert due to “an increase in people on campus that don’t belong there.”

“If you want security, there are certain limitations to people’s freedom. You can’t just walk onto campus and do what you want. Proactivity is our job, not just reacting,” the officer said.

“We do what we do to protect the students,” another officer added regarding the policy to ask for identification at the gates after 11 p.m. 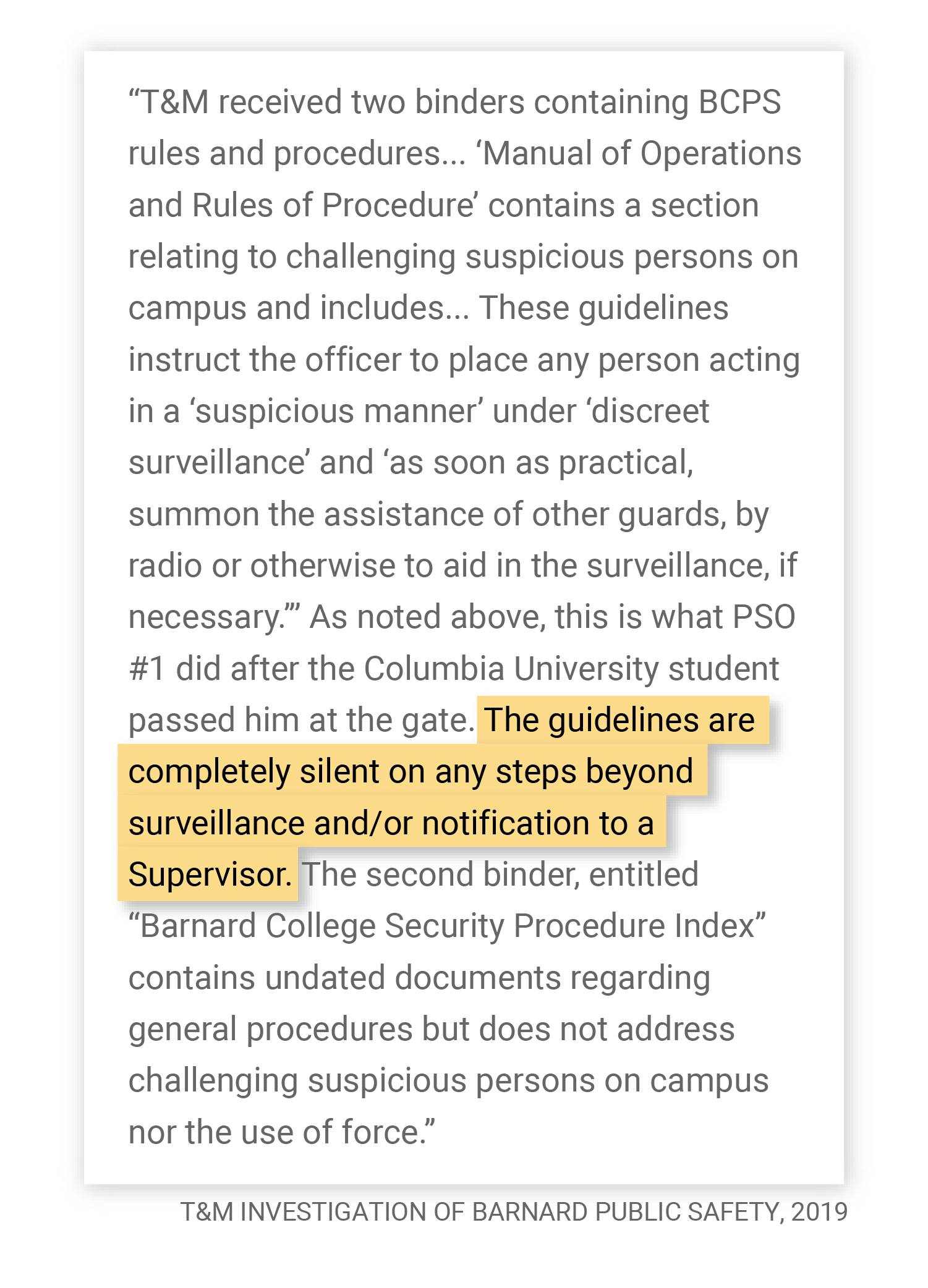 Different guards and even supervising administrators have varying interpretations of how to respond to such incidents, however, officers told the Spectator. Managerial positions in Public Safety are routinely filled by outside hires, officers said, and because of a high turnover rate at the administrative level, efforts to compile a book of policies have stalled in the past.

Instead, policies are passed down through officers who have been in the position for years, as they know how to handle most situations because they have already dealt with them in the past.

According the independent investigation’s report, the confrontation with McNab began when an officer at Barnard’s entrance called a “10-13” code, widely understood to signal a need for immediate assistance due to “imminent and serious threat of physical injury” by law enforcement officials. The officer who used the code, however, said that he had done so “hundreds of times,” while other officers said that it was rarely used.

Students have also pointed to the seemingly inconsistent enforcement of the Barnard ID policy, as well as the unjustified use of force against McNab as factors that contribute to their confusion about the extent to which Public Safety supports students of color. Emily Ndiokho, BC ’22 and the current representative for campus affairs for Barnard’s Student Government Association, said the lack of calrity about the role of officers is only exacerbated by this lack of written policies.

“A lot of the concerns I hear [from students] are rooted in the ambiguity surrounding Public Safety. A lot of students don’t know the role of Public Safety [and] don’t know when they’re supposed to go to Public Safety,” said Ndiokho, a student member of the Community Safety Group.

According to an email sent to the Barnard community in early November, one of the immediate goals of the Community Safety Group is to define a concrete mission statement for Public Safety, including a transparent and clearly written database of public safety policies.

“I would love to see more transparency [and] I would like for students to know what their rights are on campus. I would like it to be clear if officers can touch students,” Sinclair said.

Public Safety officers, however, criticized the Community Safety Group for its lack of experience in public safety and resulting inability to develop effective policies. 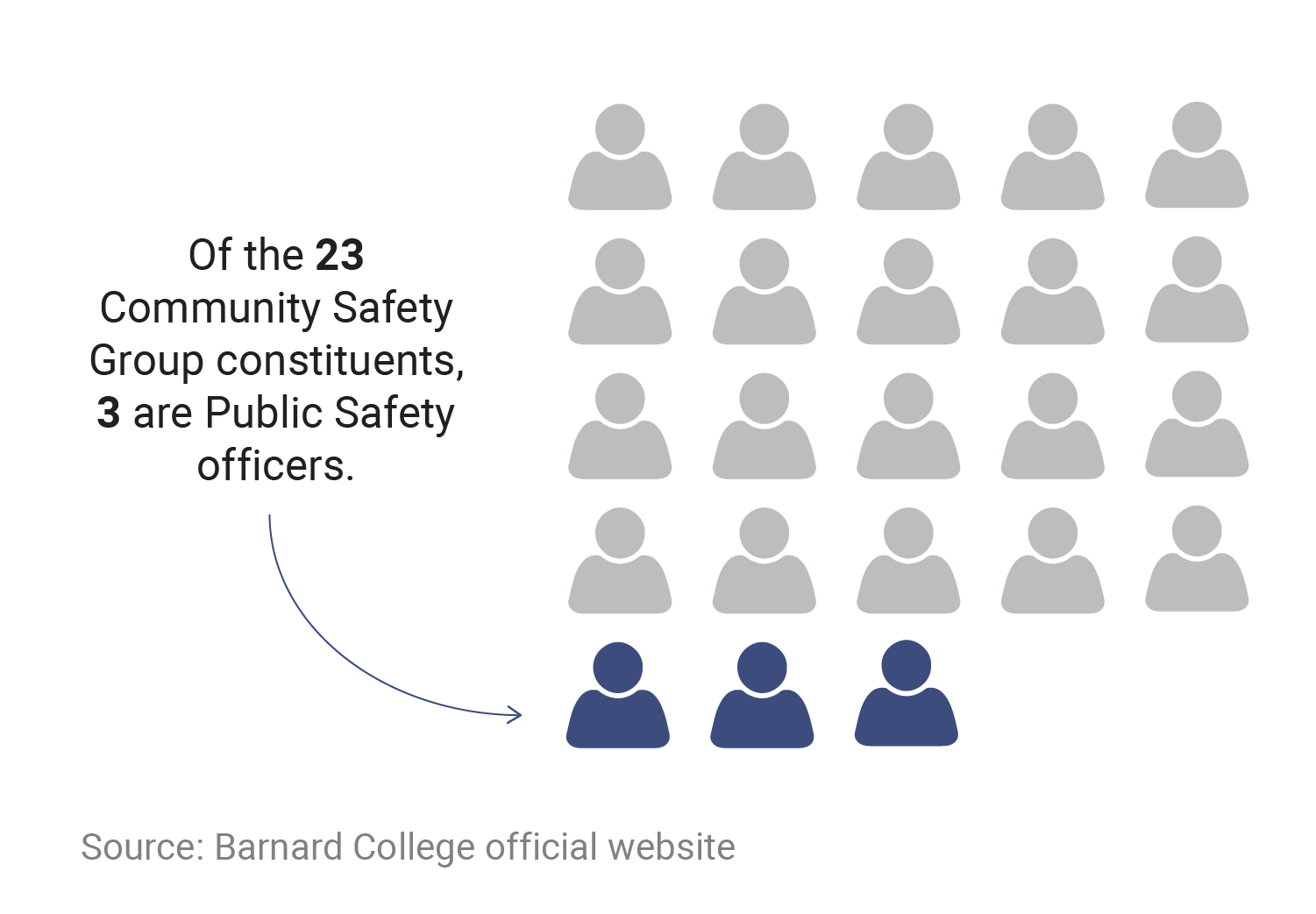 Officers said that the response of Public Safety officers to the McNab was partially shaped by an increase in homeless people coming onto campus over the course of the 2018-19 school year, which they claim students are not aware of. Officers cited incidents where homeless men have entered campus, sometimes carrying knives or in possession of drugs, and have wandered into academic buildings or used the showers in the basement of Barnard Hall.

“People didn’t realize what was really going on and why we acted the way we did,” one guard said. “We were already on high alert and we were telling each other to watch out for certain people … When something bad and tragic happens, the [administration] doesn’t let the students know about it, and they should, because [students] need to be aware.”

Officers also emphasized the small number of officers in their cohort—Barnard’s ratio of guards to students is less than half that of Columbia’s. 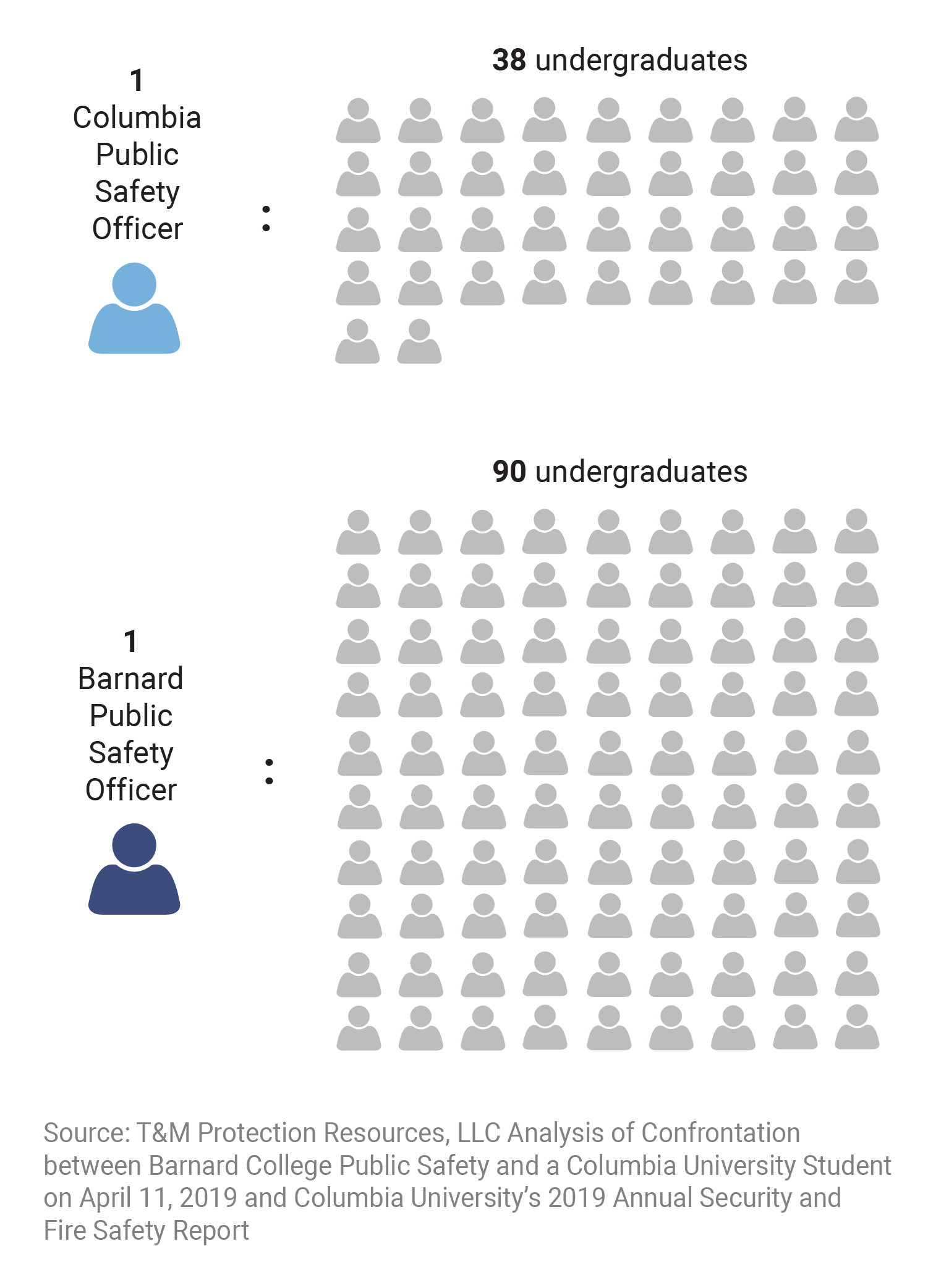 “The fundamental facts of Public Safety never change,” another officer added. “How open do you want [Barnard’s campus]? … That’s not something that somebody who has no experience in [public safety] should have any input in implementing, because you’re not in it.”

But for students advocating for changes to Public Safety policies, safety does not solely mean protecting students from the “outside.” Sinclair noted that Barnard’s campus is open to the community during daylight hours and questioned the need to keep non-students away: “If your gates are open, why shouldn’t they be able to go onto campus?”

Ndiokho said that she and other students have expressed concerns about the discretion that Public Safety officers use when determining whether or not someone is a threat, particularly as the implementation of Barnard’s public safety policies appears to be premised on the idea that certain people—usually people of color—are viewed as being outsiders and are deemed to pose a threat.

“Anyone can be a Barnard student, so it’s an inherently prejudicial statement to say that this is what a Barnard student looks like, or ‘I think that person doesn’t go here and is an outsider,’” said Ndiokho. “There’s a false sense of unity … just because [someone is] in your community doesn’t mean they’re not going to do harm.”

Angela Simms, an assistant professor of sociology and urban studies at Barnard who studies issues of racial inequality, said that any discussion of public safety must primarily consider the history of racialization in the United States and its role in fostering an idea that black people do not belong at elite institutions like Barnard and Columbia.

“To do good work as a police officer is to guard against that prejudice that is endemic to the social control of black bodies. We’re in Harlem, so there is this way in which black bodies, or black people themselves, are perceived as a threat and out of place here,” she said.

Simms emphasized that public safety policies should work to meet the “distinct but overlapping” goals of safety and equity.

“The desire for safety is to be able to notice anybody that poses a threat, regardless of their race or socioeconomic status—and if you’re only surveilling for black people, you might miss white people who are a real threat,” she said.

But in light of discussions surrounding race and safety, officers have claimed that the backlash to their treatment of McNab has deterred them from ensuring campus safety. Now, officers said, they are more likely to observe rather than be proactive and risk getting in trouble, which they fear could have repercussions in ensuring the safety of the community.

“Nobody wants to be accused of profiling or getting in trouble or getting fired … When we come across a situation, we still react, but we don’t get as involved with the interaction as we used to. We do more of a ‘He went that way’ situation, where you identify, you locate, and then you report,” another officer said.

Phanesia Pharel, BC ’21 and former SGA representative, said she believes that the college’s efforts to change public safety are insufficient because they will do little to address the deeper cultural and racial issues that permeate Barnard’s campus.