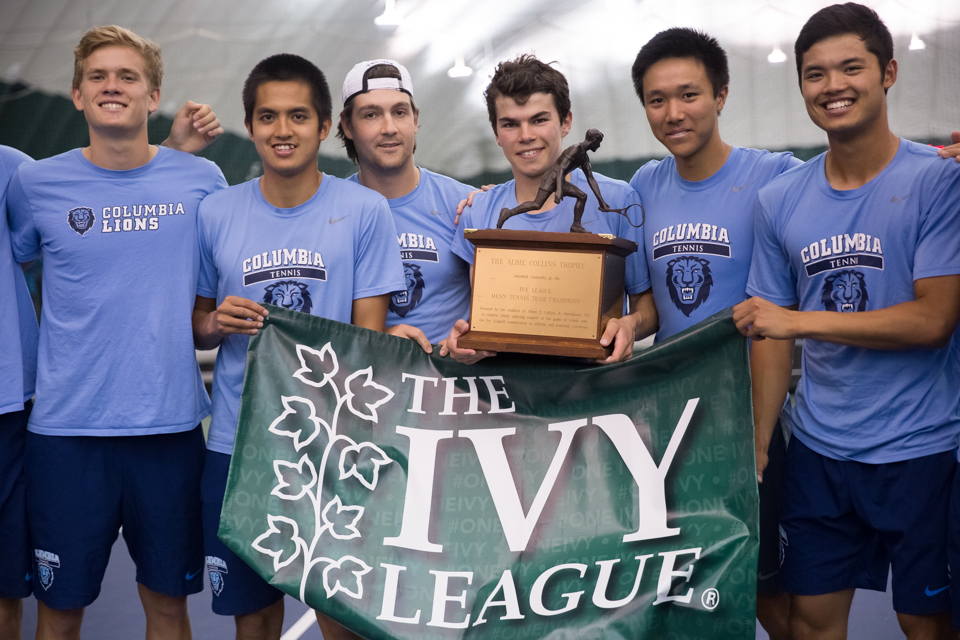 The Lions (17-4, 6-1 Ivy) finished in a three-way tie atop the Ancient Eight with Cornell and Harvard, with each team tallying a 6-1 record for the conference season. After the Intercollegiate Tennis Association rankings are released on Tuesday, the team with the highest ranking will receive an automatic bid to the NCAA tournament.

The Light Blue, placed No. 23 in last week’s rankings, has been ranked for the entirety of the dual season, and will hope that the algorithm utilized by ITA to formulate the rankings falls in its favor. According to College Tennis Today, a highly reputable college tennis blog, Columbia is projected to finish two spots ahead of Cornell, which would clinch the automatic bid.

The team’s fourth consecutive title is its 14th overall, and head coach Bid Goswami’s 12th in his 35 years at the helm of men’s tennis. It is also Columbia’s first men’s program to win four straight titles since fencing’s eight-year run atop the Ancient Eight from 1986-1993. Goswami was overcome with emotion, marveling at his team’s unprecedented achievement.

“It’s a good feeling for me, but I can’t imagine how they must be feeling,” Goswami said of his team’s success. “They worked hard from the beginning. None of these guys started in their freshman year, but they earned this with their hard work.”

Play against Yale (16-9, 2-5 Ivy) began Sunday with the Lions capturing the doubles point for the sixth time in seven conference matches. At first doubles, senior Richard Pham and sophomore Victor Pham, ranked No. 57 in the most recent ITA rankings, cruised to a 6-2 victory over the Bulldogs’ Alex Hagermoser and Fedor Andrienko. It was the duo’s last home match as a pair, as after nearly 15 years of playing together on the junior circuit, the elder Pham will depart Columbia a four-time Ancient Eight champion.

Then, at third doubles, senior Christopher Grant and junior Michal Rolski finished out their run throughout the dual season with a 6-4 win over Yale’s Tyler Lu and Photos Photiades. With the win, the pair improved its record to 12-1 with a lone blemish from their match against Harvard last weekend.

Grant finished out his senior regular season campaign going 16-1 for the dual season and 18-2 in the spring. Coupled with a singles victory in his lone singles start of his career, Goswami was particularly complimentary of the Santa Barbara, California, native’s leadership throughout the year, noting that the co-captain led by example on and off the court.

Needing only three victories in singles play to clinch the crown, the Lions reaped the benefit of playing at home, where they have not lost in Ivy League play since 2011.

At sixth singles, sophomore Timothy Wang topped the Elis’ Ryan Cheng 6-4, 6-1 to give the Lions their first singles win and second point overall. After the win, Wang improved his record for the dual season to 16-3 with a perfect 6-0 in Ancient Eight Matches.

“Tim is unbelievably gritty,” Goswami said. “I don’t think he had a very good week of practice, but the only thing that I know is that he has that intangible. I think if we just put him in, he does well for us.”

Following soon after Wang was first-year Adam Ambrozy, who won his second career Ivy League match at fifth singles, after replacing sophomore Will Matheson in the lineup midway through the Ancient Eight slate.

Ambrozy topped the Bulldogs’ Andrew Heller 6-2, 6-4, and in doing so put the Light Blue just one win away from the title.

With the Light Blue ahead 3-0, the mood inside the Dick Savitt Tennis Center was one of pure excitement, as chants of “Let’s go Lions” cascaded throughout the cavernous bubble. Ultimately, Victor Pham would deliver in the moment, as a critical break in the second set led him to the decisive 6-4, 6-4 win.

Knotted at 4-4, with one set in hand, Victor Pham, ranked No. 71 in the ITA rankings, was battling Yale’s Ziqi Wang, who had experience playing as high as first singles a season ago. With Wang on serve, Pham battled to bring the score to a deuce point. After a nearly 45-second rally, Pham would capture that point, putting him in prime position to serve for the match.

“I love being the clinching match,” Pham said. “Sometimes it’s tough, but it’s what I try to embrace.”

Deuce points, again, were ever so critical for the Lions as Goswami asserted that his team’s ability to secure those points ultimately put them over the top.

Despite Pham’s win having secured the match for the Light Blue, the remaining matches would finish out, as both head coaches previously agreed to play out each match.

With the score at 5-1, and the title in hand, senior Shawn Hadavi, ranked No. 82 in the ITA rankings, was embattled in a three-set match with Yale’s Lu, ranked No. 63.

After Lu sneaked out a tiebreaker to take the first set, Hadavi would battle back to a 6-1 second-set victory. The match would go to a third-set tiebreaker. As both players came into the matchup undefeated in Ancient play, the match served as a de facto match for Ivy League player of the year.

Lu quickly jumped out to a lead in the 10-point breaker, and Hadavi briefly came back, coming within one point of the lead. But Lu was ultimately too much for Hadavi, and the Yale senior closed out his regular season with a win, ending Hadavi’s near-perfect season on a sour note.

Yet after the match, Hadavi and his teammates reveled in the glory of a fourth consecutive Ancient Eight crown. Amid celebrations, the seniors would go out undefeated at home in Ivy League play, dropping just a single match in 33 tries against Ancient Eight opponents, including Eastern College Athletic Conference Championship matches.

Hadavi praised his teammates’ efforts throughout the match and throughout the season as a whole, taking the opportunity to reflect on his outstanding career.

The previous day, the Lions cruised over Brown (11-11, 0-7 Ivy) in dominant fashion, with the team capturing a 4-0 win over the winless Bears.

Behind victories at first and second doubles from the Pham brothers and the pair of Hadavi and Tang, respectively, the Lions quickly captured the doubles point and would not look back.

While Victor Pham’s win against Brown’s Jack Haworth would ultimately give the Lions the clinching match, Tang was on the brink of a win, as his match went unfinished despite his 7-5, 5-0 lead at third singles.

The match finished in approximately two hours, as the Light Blue was not flustered against the Bears. Goswami cited the match’s importance, noting that no Ivy League match is ever easy, despite the team’s unprecedented success.

With the dust having settled after an eventful weekend, the Lions now await their fate when the NCAA selection committee determines their seeding and possible first or second round opponent on May 2. Until then, Goswami and his team can revel in yet another championship.