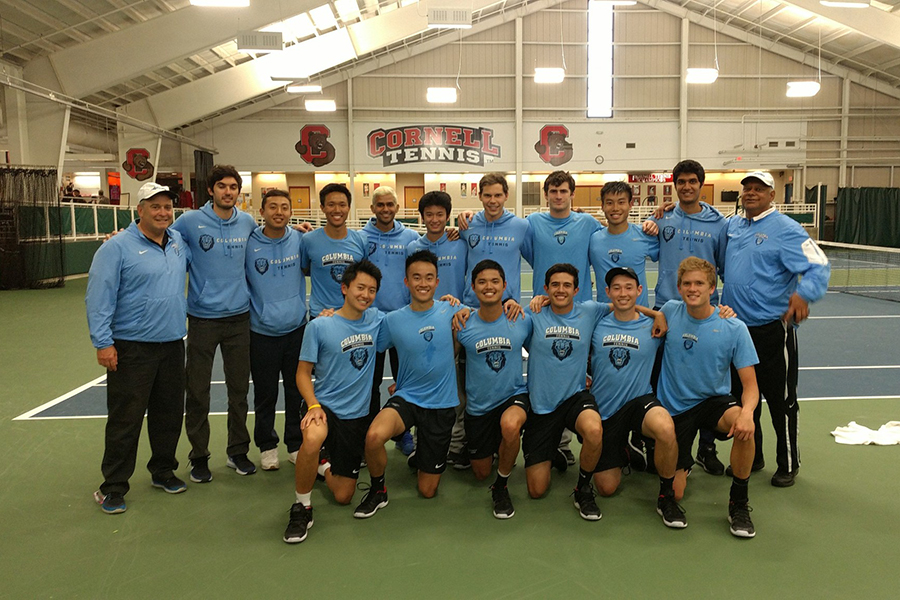 The men's tennis team poses after defeating Cornell 4-0 on Saturday in Ithaca. The win gave the team its fifth consecutive Ivy League title, and the program's 15th in its history.

With the victory, the Lions (17-4, 6-1 Ivy), ranked No. 16 in the most recent ITA rankings, became the first tennis program to win five straight Ivy League titles since Harvard’s five-year run atop the Ivy League from 1989 to 1993. The 4-0 victory over Cornell was the Lions’ sixth straight over the Big Red in Ancient Eight play, which bodes well for the Lions’ seeding in the upcoming NCAA Championships.

The Light Blue will share its fifth straight title with No. 27 Dartmouth (20-5, 6-1 Ivy), against whom the Lions lost at home in stunning fashion on April 15.

The Lions, who have been ranked as high as No. 5 in the nation this season, needed a victory against the Big Red (10-11, 3-4 Ivy) to secure the title, but faced the tall task against a Cornell team on a three-match win streak.

Head coach Bid Goswami, who has been in charge of Columbia’s men’s tennis program for 36 years, noted that the Lions knew what they were going up against and that each team had plenty for which to play. That made this title that much more satisfying.

“It’s a blessing,” Goswami said of the accomplishment. “It’s been a good run, and each team has its own special meaning for me. 36 years later, winning never gets old.”

The weather conditions for Saturday’s match were volatile, as the teams warmed up inside, while the match would start outside. But 10 minutes into doubles play, a storm arrived in Ithaca and the players returned inside as both teams were unable to warm up before play resumed indoors.

Buoyed by a raucous crowd, Cornell jumped out to a lead on all three doubles courts. With junior Victor Pham back in the doubles lineup, the Lions were at full strength for the first time in the Ancient Eight this season.

At second doubles, the pair of Will Matheson and Jack Lin, ranked No. 44 in the most recent ITA rankings, faced a 4-0 deficit with Cornell on serve and the duo’s chances of securing a victory quickly evaporating.

Cornell appeared well on its way to the doubles point and a 1-0 lead.

But for those who have followed Columbia over the years, there was little doubt that the Lions would rise to the occasion. And rise, they did.

First, Matheson and Lin broke back to cut the deficit to 4-1 and promptly won three more games to tie the set at 4-all with Cornell on serve.

On the other courts, Rolski and Ambrozy had jumped to a 5-4 advantage, with Cornell serving to stay in the match, while Pham and Tang could not fend off Cornell’s Alafia Ayeni and Lev Kazakov, falling 6-3. The Lions now needed to win the two remaining doubles matches to secure the point.

Rolski and Ambrozy were the first to finish, as the duo broke Cornell’s Jake Hansen and Daniel Grunberger to win a narrow 7-5 set, setting the stage for Matheson and Lin, who broke Cornell’s Joseph McAllister and David Volfson, giving Matheson the ball with a 6-5 advantage.

With Matheson serving, the pair held at love and secured a 7-5, come-from-behind victory to clinch the cherished doubles point. With that victory, the raucous crowd was effectively silenced, as the Light Blue contingent that trekked nearly five hours to Ithaca was ecstatic.

In singles play, the Lions continued to ride the momentum shift and captured five of six first sets. At first singles, Pham battled Cornell’s Volfson to a tiebreaker, but fell 7-6(2) in a match that would eventually go unfinished.

First to finish was first-year Austen Huang, who won 6-3, 6-3 to cap off a strong spring regular season after struggling in the fall. Huang finished the dual season with a 14-4 record in singles, including seven consecutive victories and a perfect record in Ancient Eight play. Goswami praised Huang’s work ethic amid his transformation.

“Austen has really turned a corner,” Goswami said. “He is playing some big-time tennis, and is playing with a lot of confidence. He has a lot of fighting qualities and I’ve known that since the first time I saw him play when he was a sophomore in high school. It was just a matter of time until he started playing well.”

Next to finish was sophomore Adam Ambrozy, who cruised to a 6-4, 6-2 victory over Cornell’s Daniel Grunberger. Grunberger, who once attended Columbia, finished his two-year spell at Cornell having never defeated a Columbia opponent in a dual match.

With a 3-0 lead in hand, first-year Jack Lin possessed a 6-4, 5-4 advantage and had an opportunity to close the match on serve.

With the match knotted at 15-all, Lin won two points in a row after two impressive gets to set up triple match point at 40-15. The Lions and their traveling supporters focused their eyes on the court.

Lin bounced the ball, tossed it in the air, and slammed home an ace out wide to clinch a 6-4, 6-4 victory and the team’s fifth straight title.

“The bus ride back [from Ithaca] was really joyful,” Goswami said.

Coupled with Baylor’s run to the final of the Big XII tournament, the Lions’ victory over Cornell essentially locks down the No. 16 position, according to highly accurate projections from collegetennisranks.com. While the draw is released on Tuesday at 5:30 p.m., Goswami feels that the team’s résumé speaks for itself and that Columbia should be rewarded as a host for the first-ever time.

“I never would have expected to be No. 5 in the country, but we had some great wins this season,” Goswami said. “It’ll all be pretty close, but I think everything will work out in the end.”

Should Columbia host, it would add to an impressive list of program-firsts accrued over the last five seasons.

But for now, Goswami and company will rest on their laurels, if only for a few days, on top of the Ivy League once again.