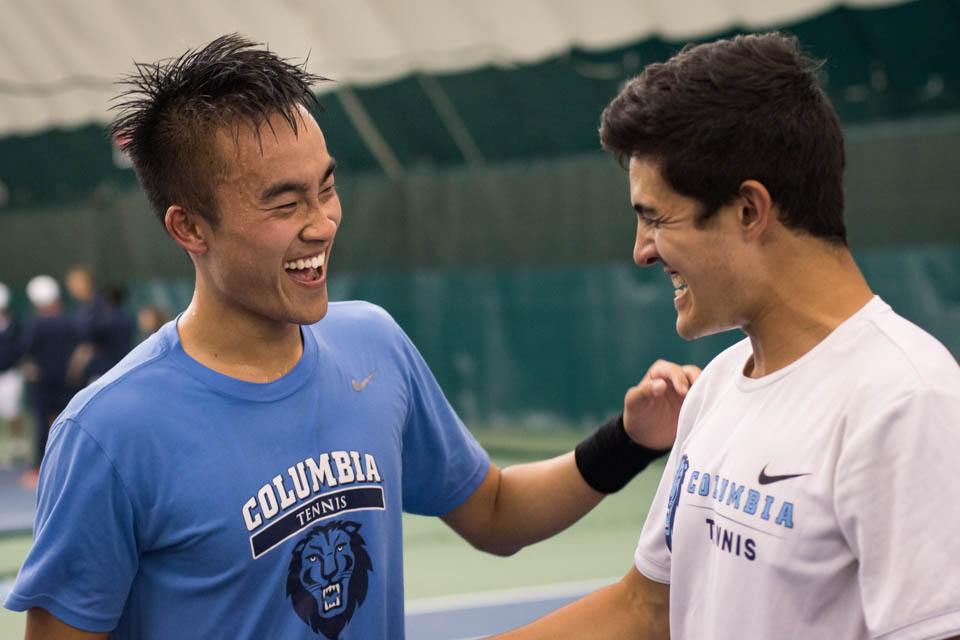 Junior Timothy Wang (left) celebrates with teammate Alex Keyser (right) after a three-set, 6-3, 4-6, 6-1 victory clinched the match for the Lions.

Junior Timothy Wang stepped up to the service line leading 40-15 and 5-1 in the third set. It was match point for Wang and for the Lions after a long and thrilling match.

He bounced the ball four times, and brought the ball to his racket to begin his serving motion.

“Serve out wide. Serve out wide,” Wang said of his strategy in that moment after the match. “After that, the rest was history.”

He tossed the ball high in the air, like he always has, and slammed a service winner out wide.

Wang’s teammates rushed the court, jumping up and down in rhythm, celebrating the team’s 4-2 victory over Virginia. The win put the Lions in the Sweet 16 for the third time in five seasons, just two weeks after the Light Blue clinched its fifth straight Ivy League title.

But this victory—one of a litany of accomplishments over the past five seasons—meant much more for the Lions. 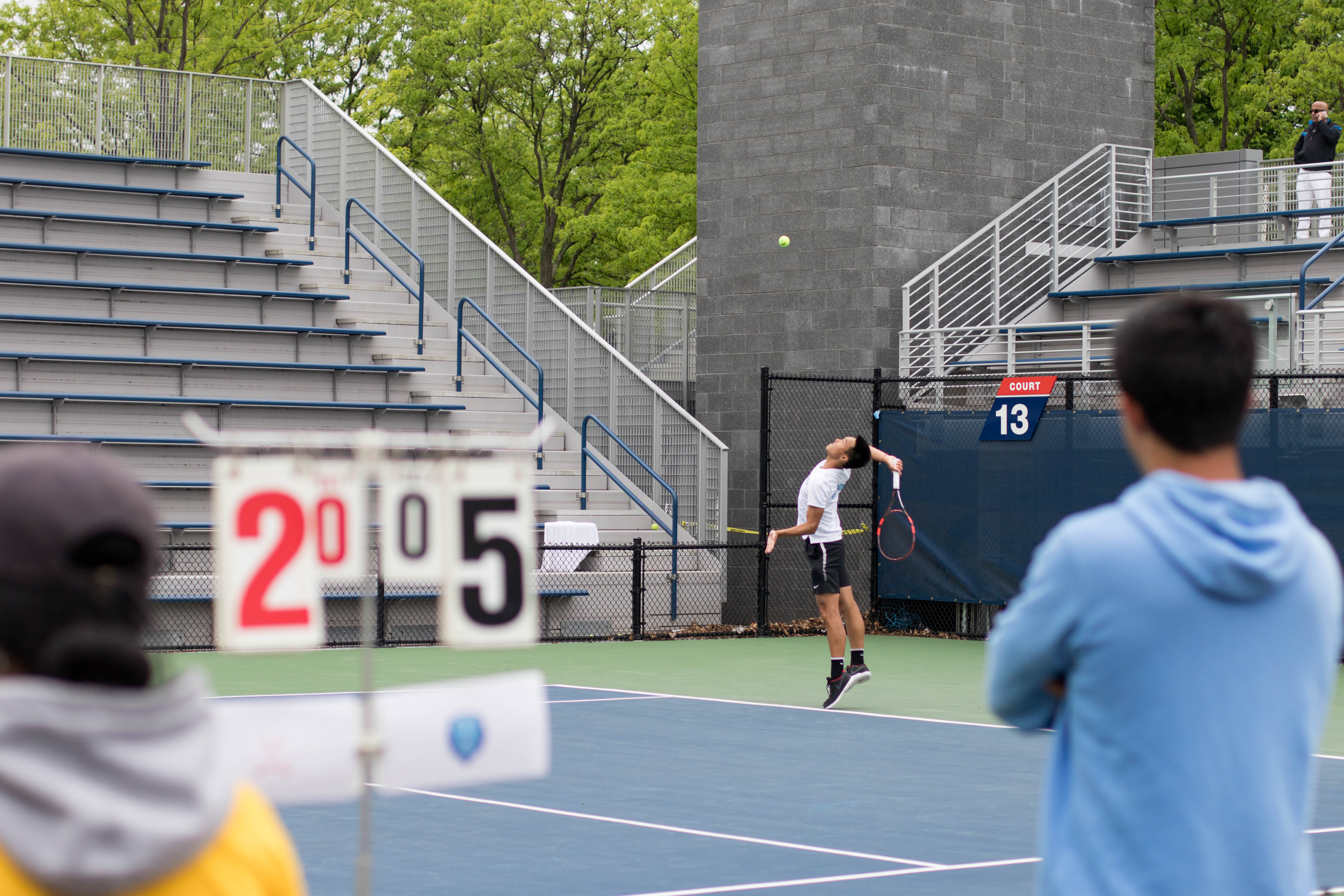 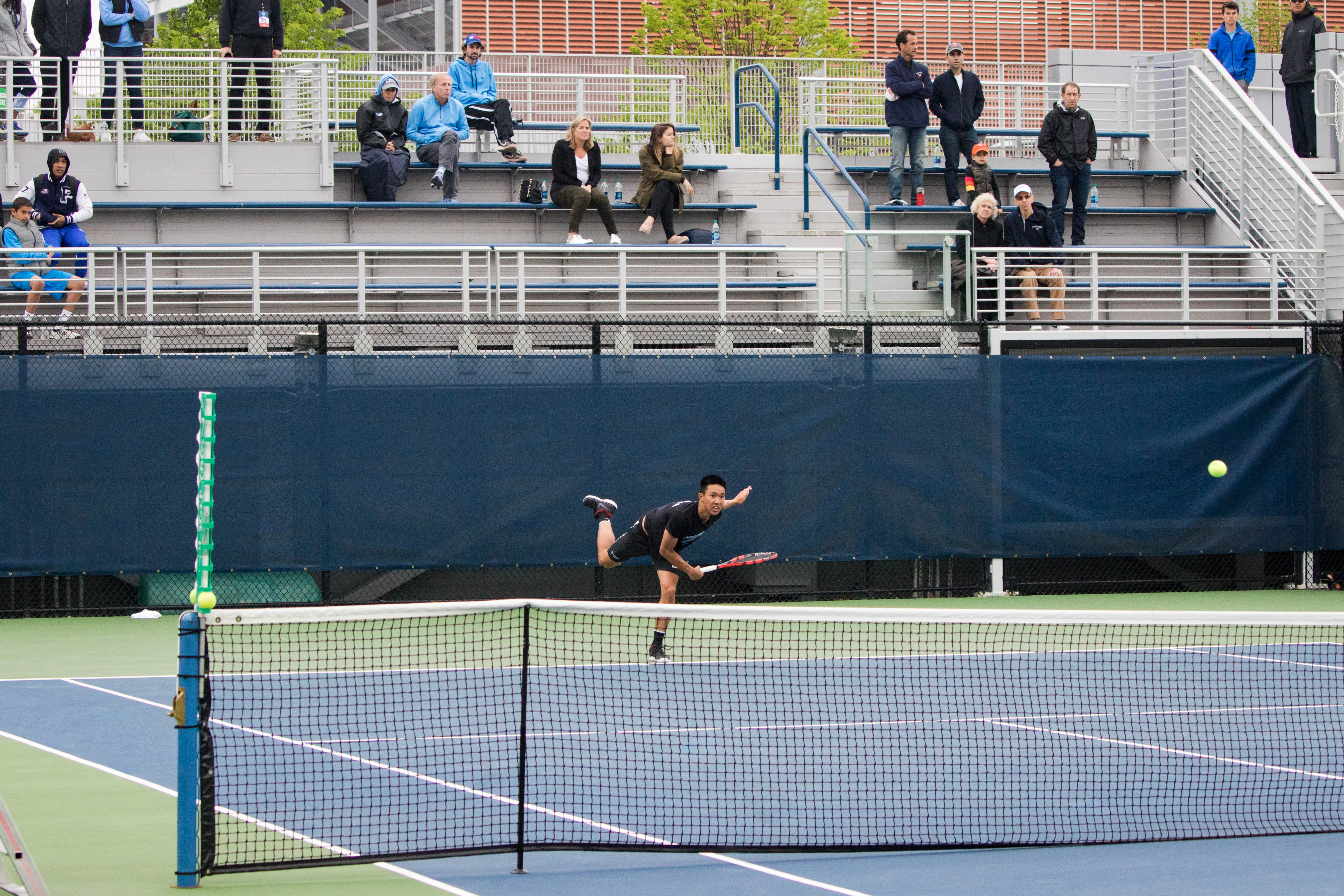 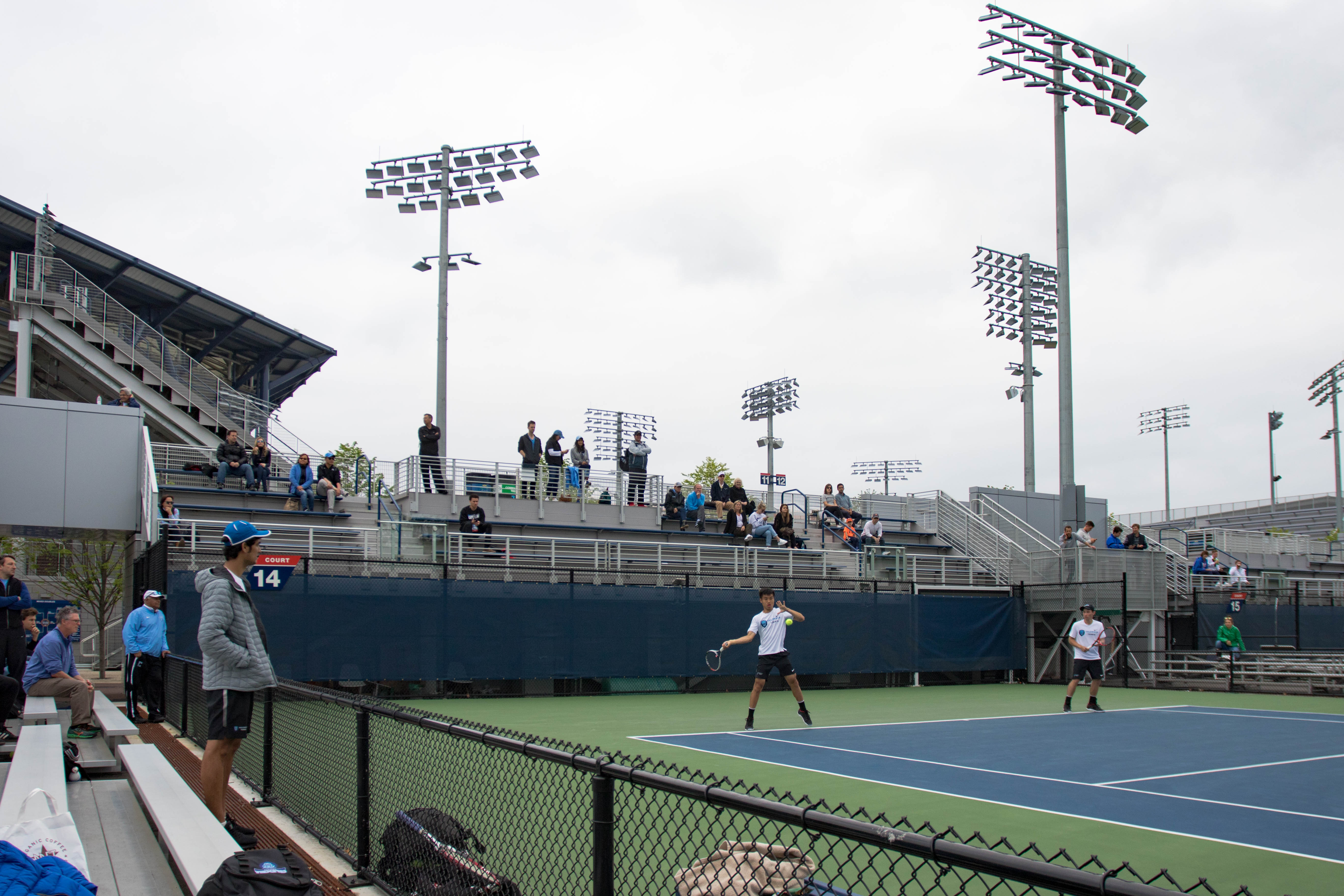 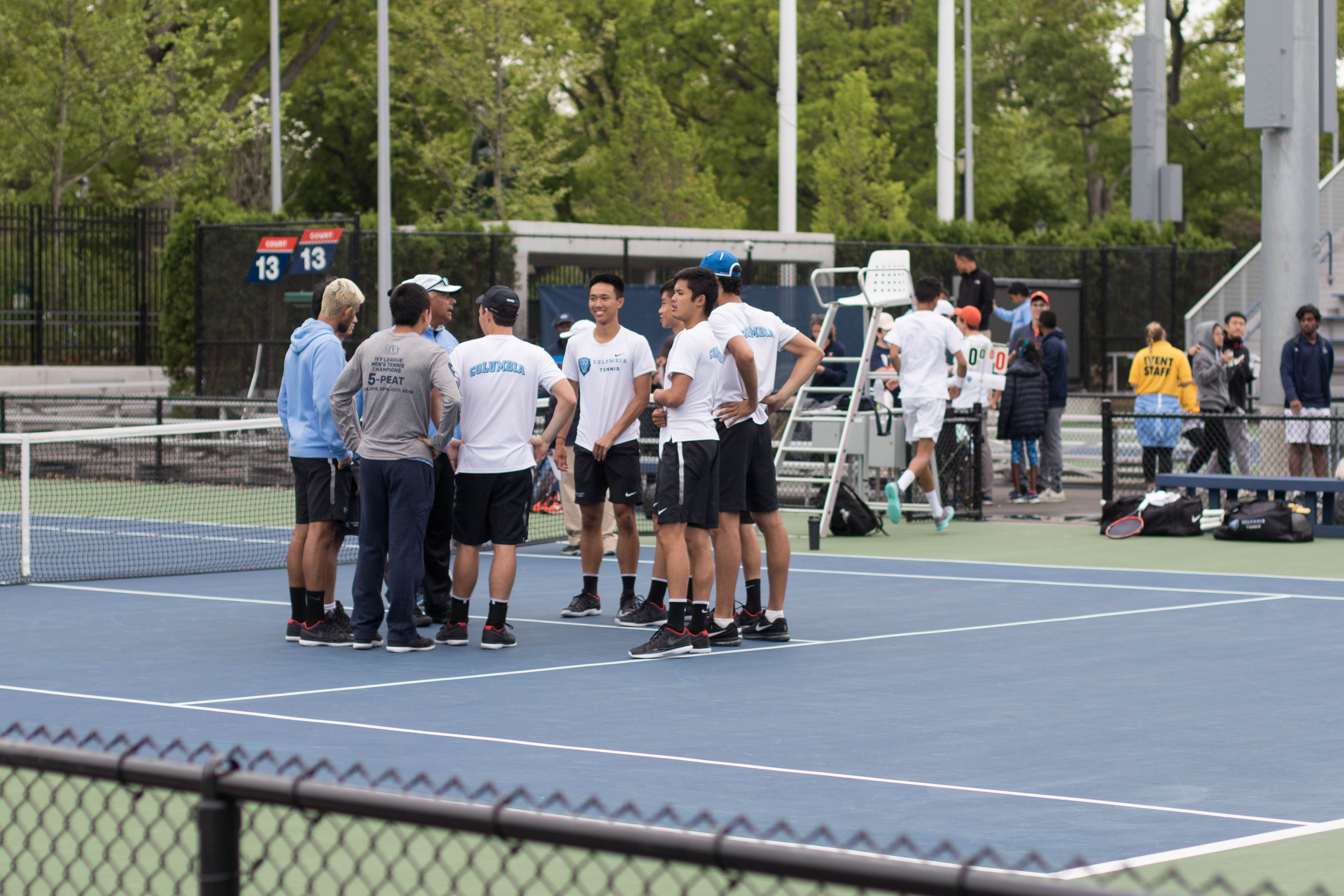 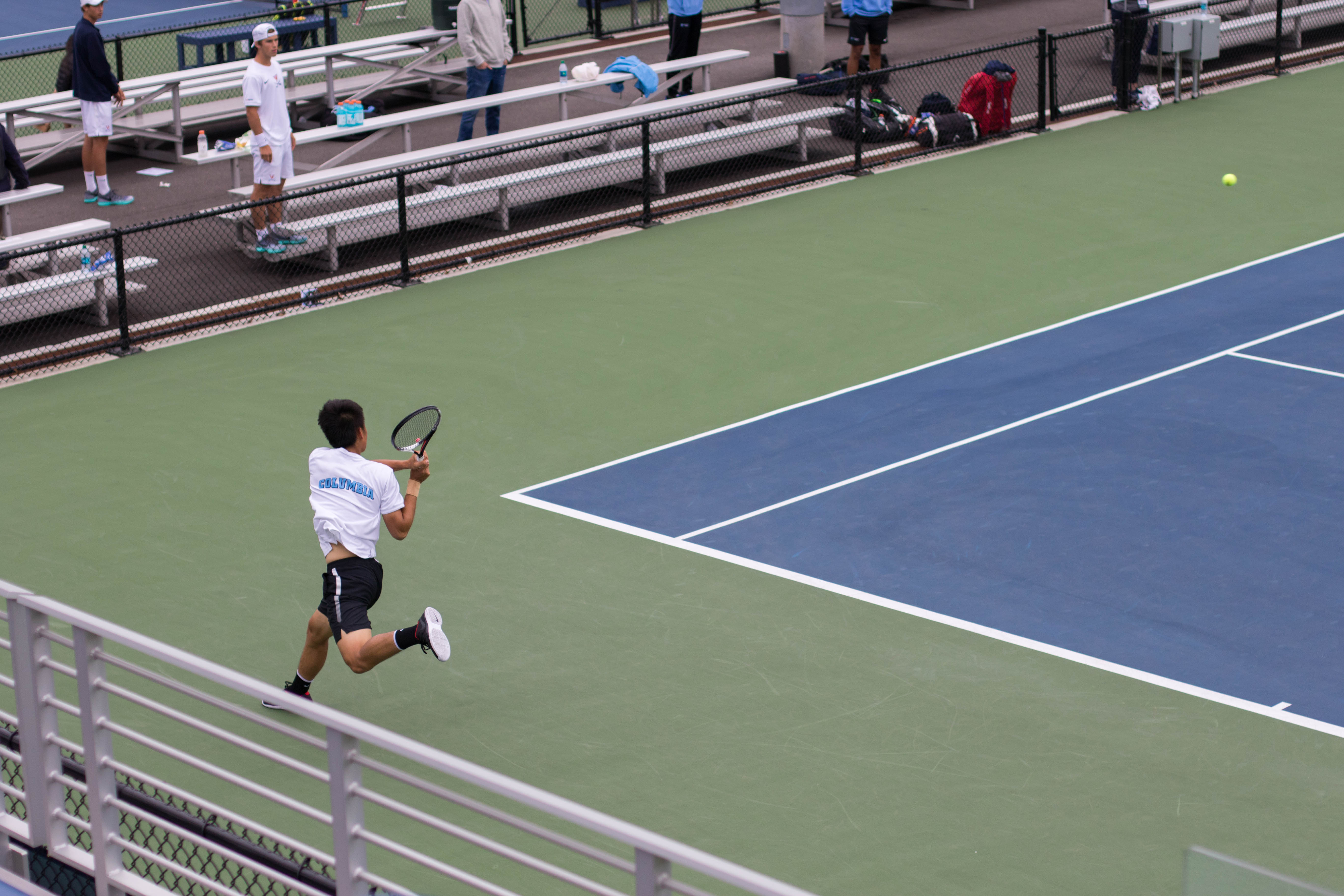 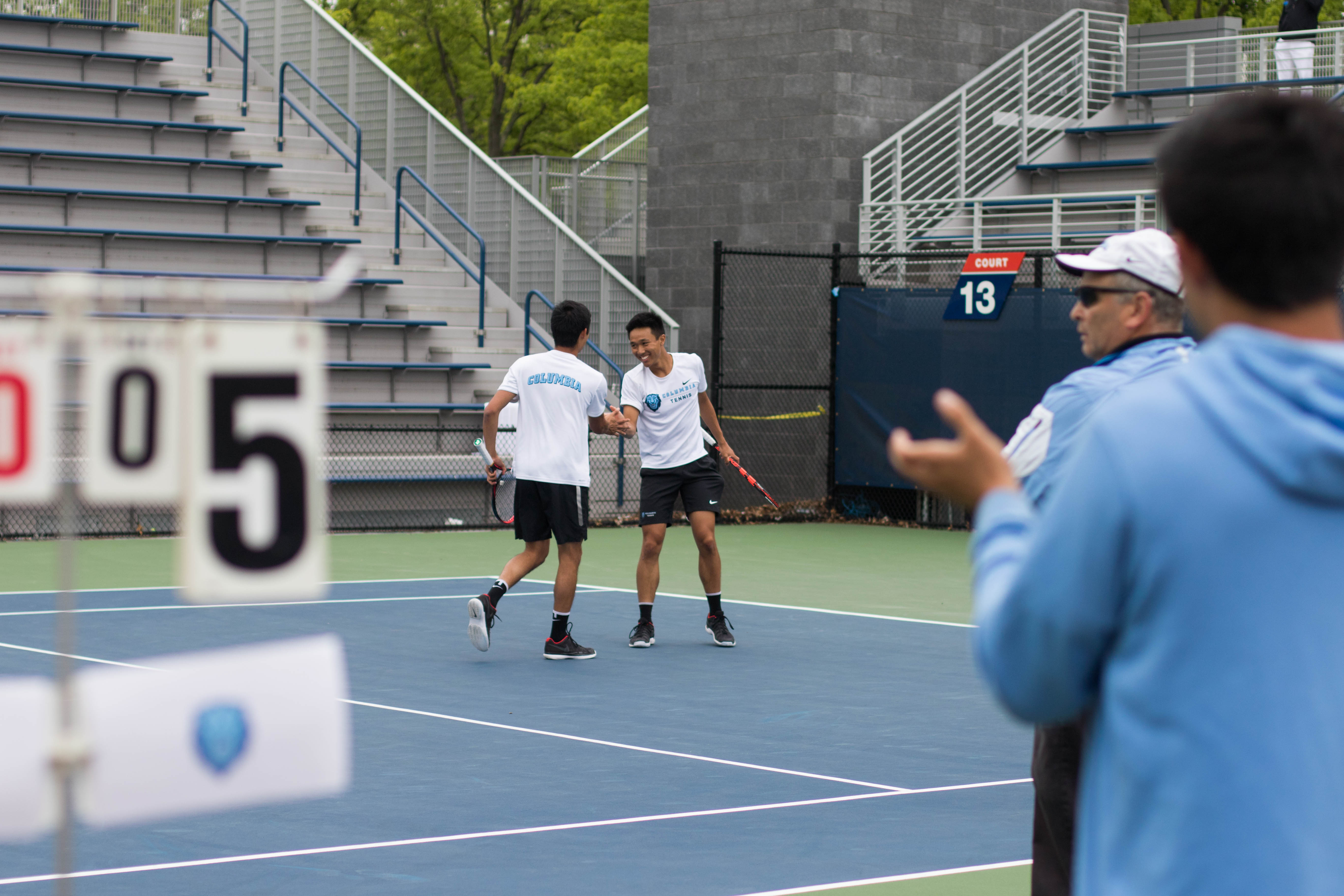 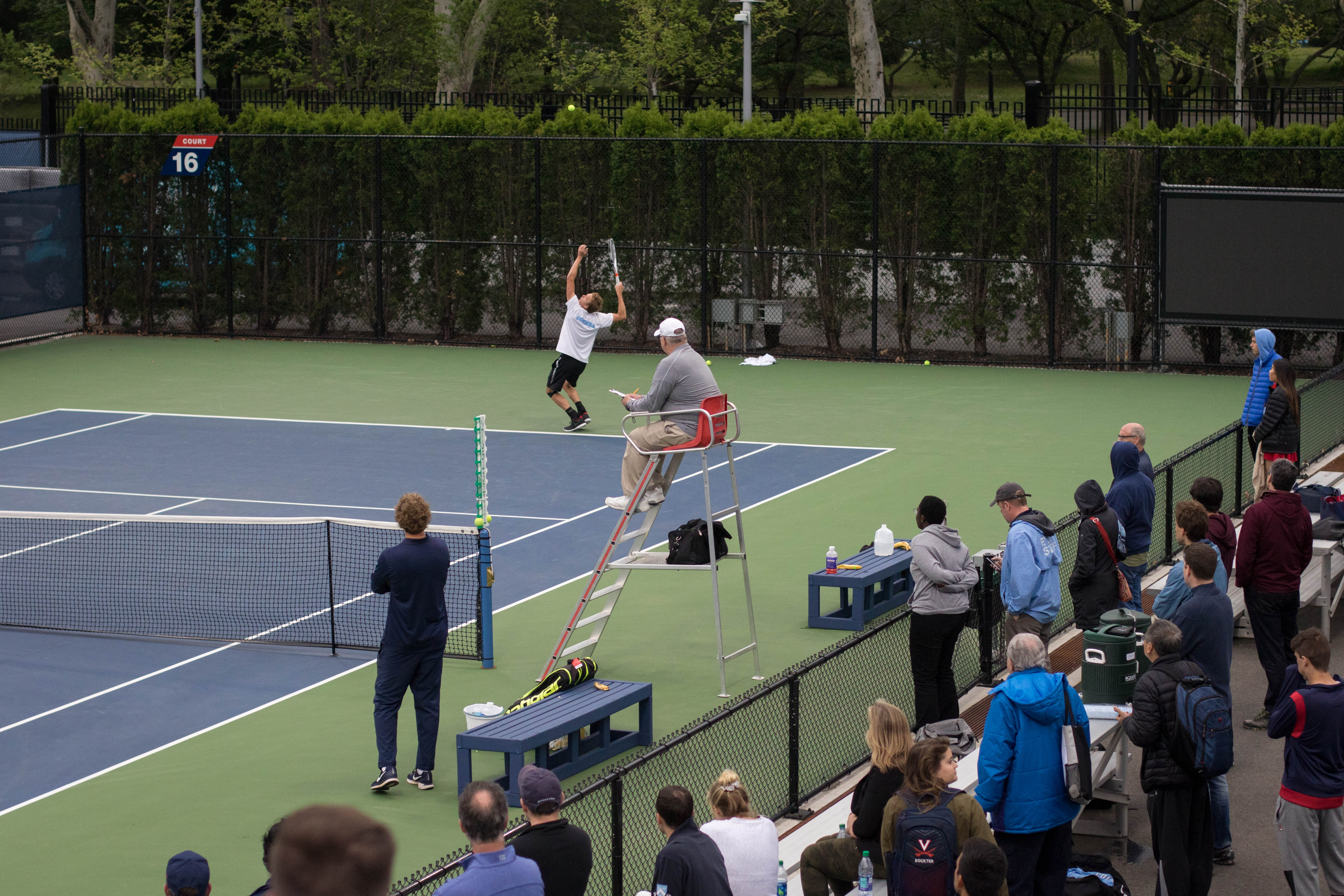 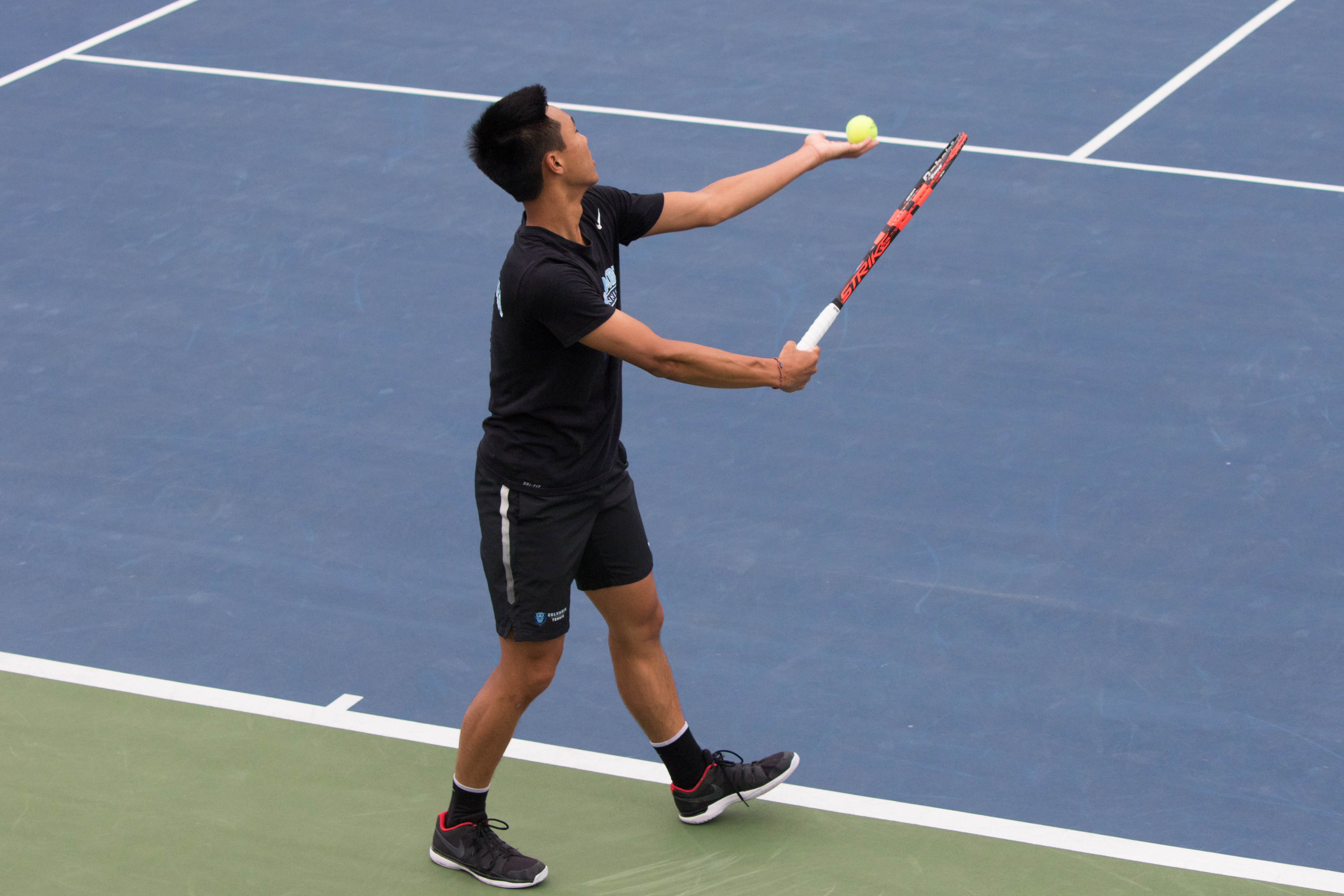 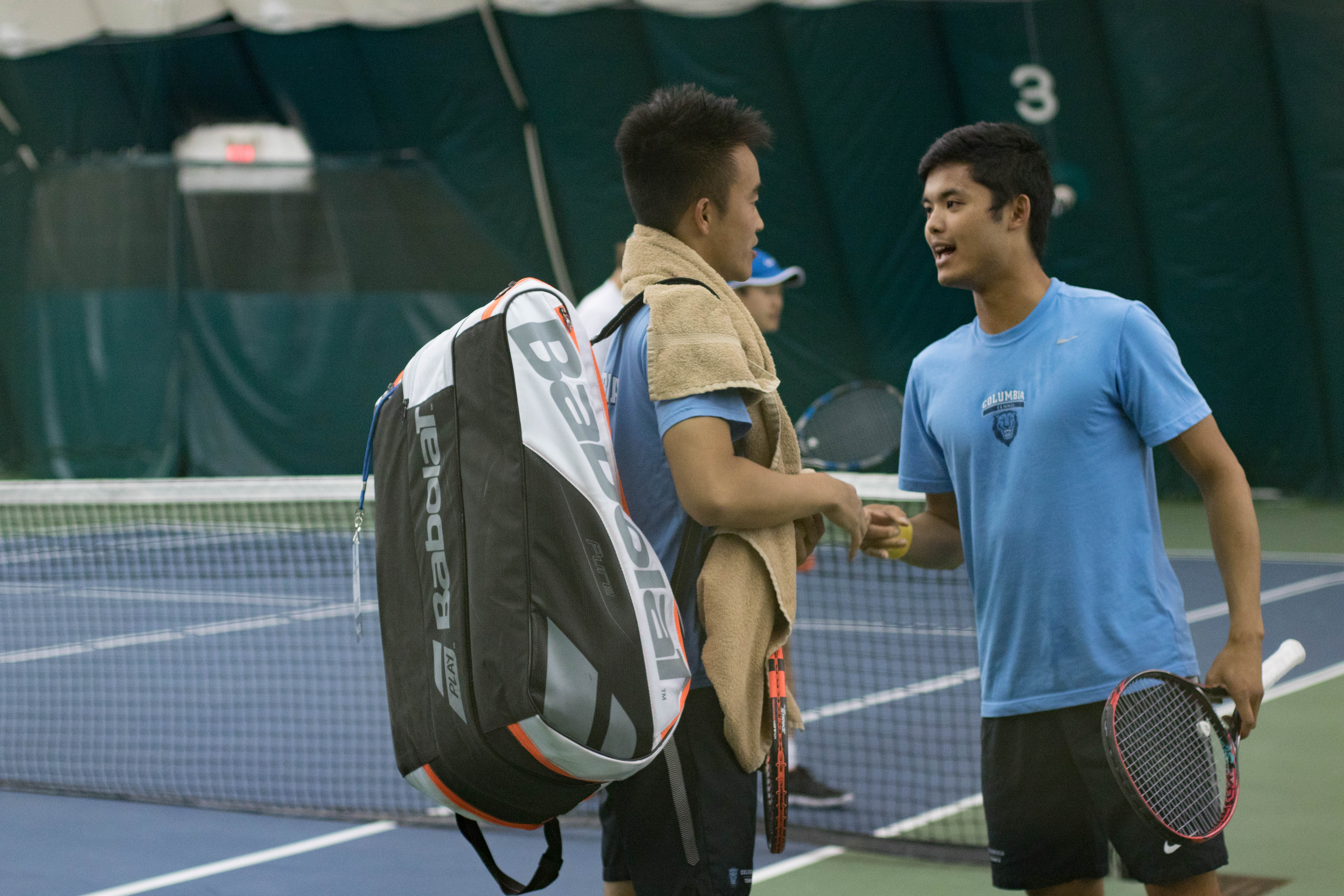 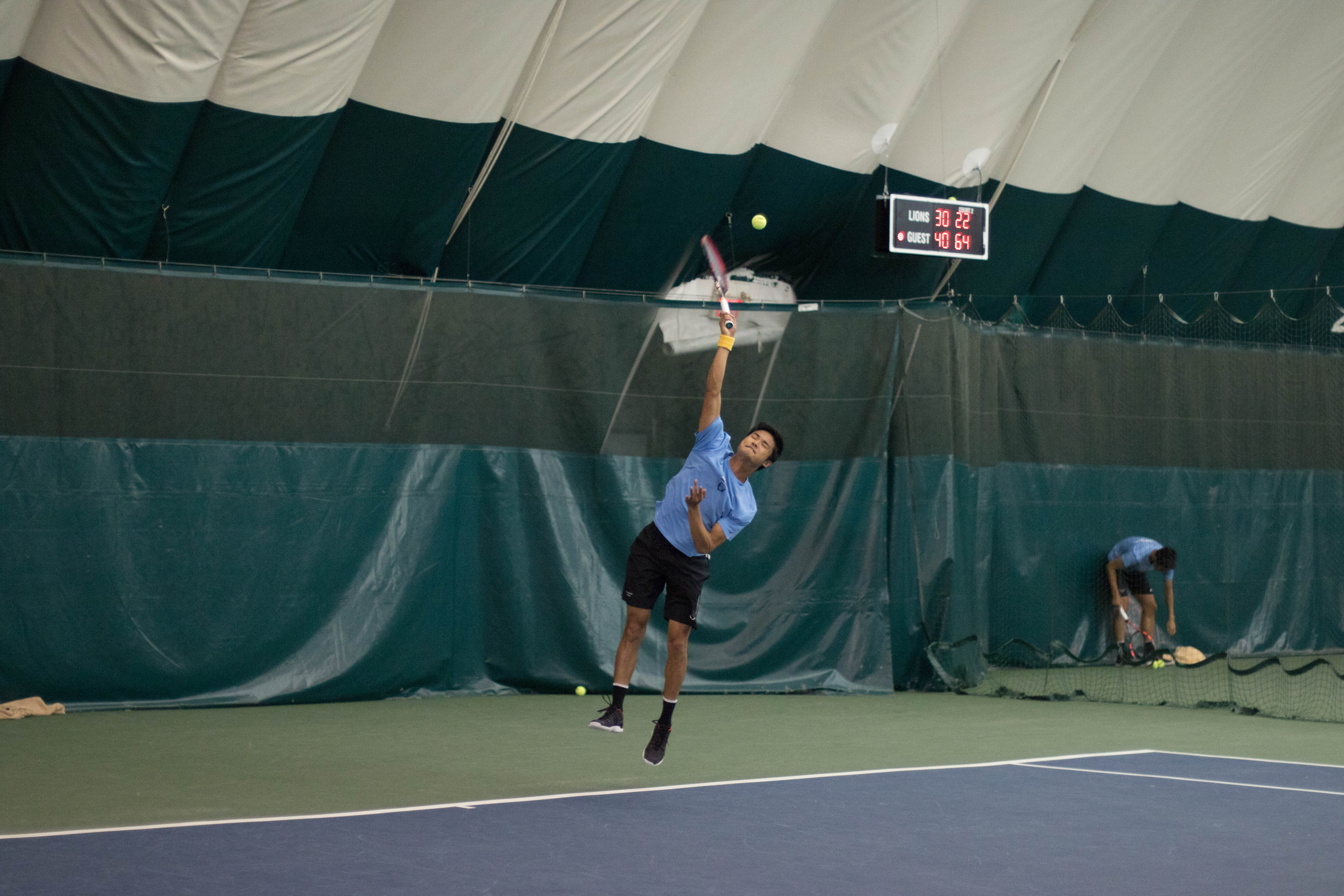 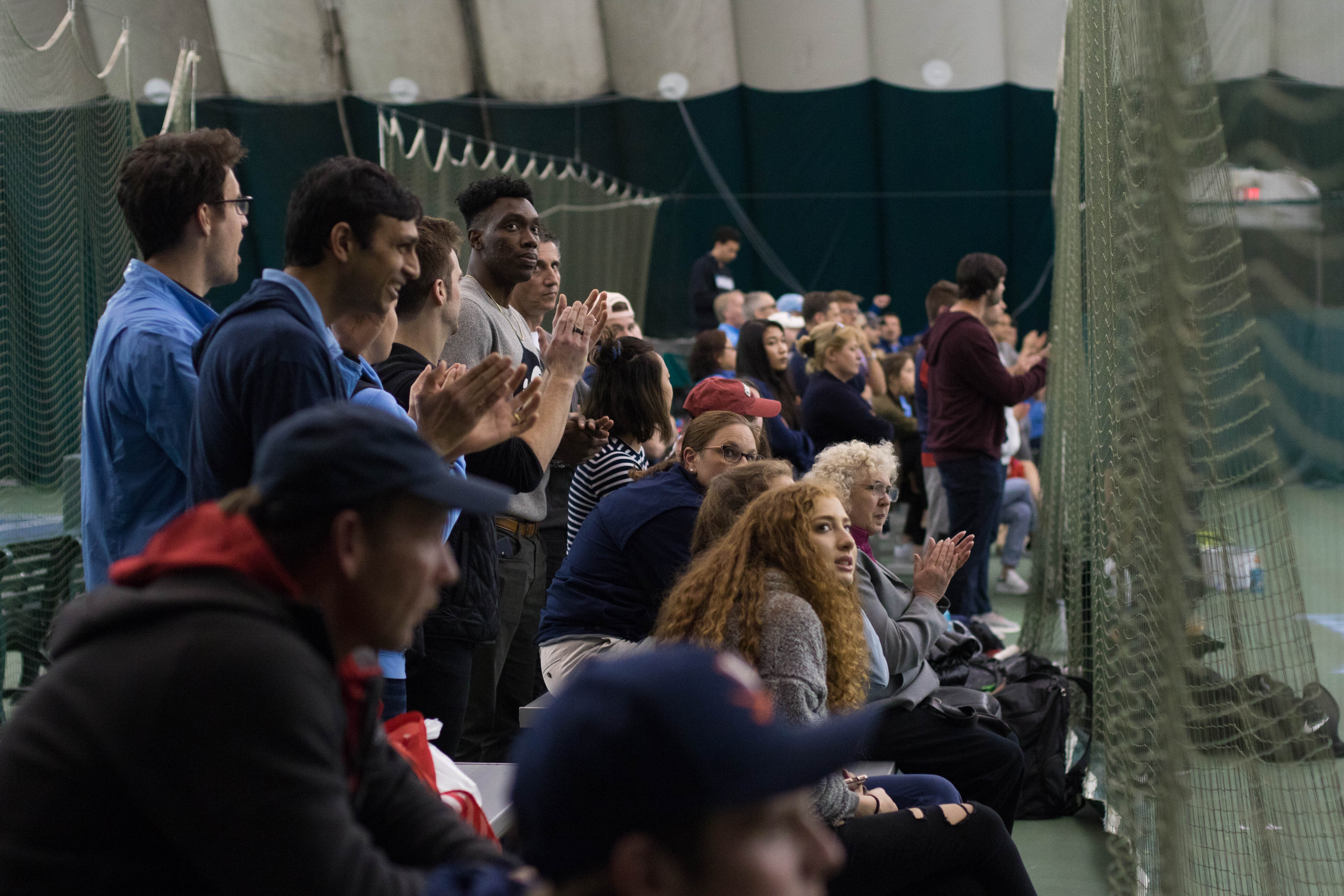 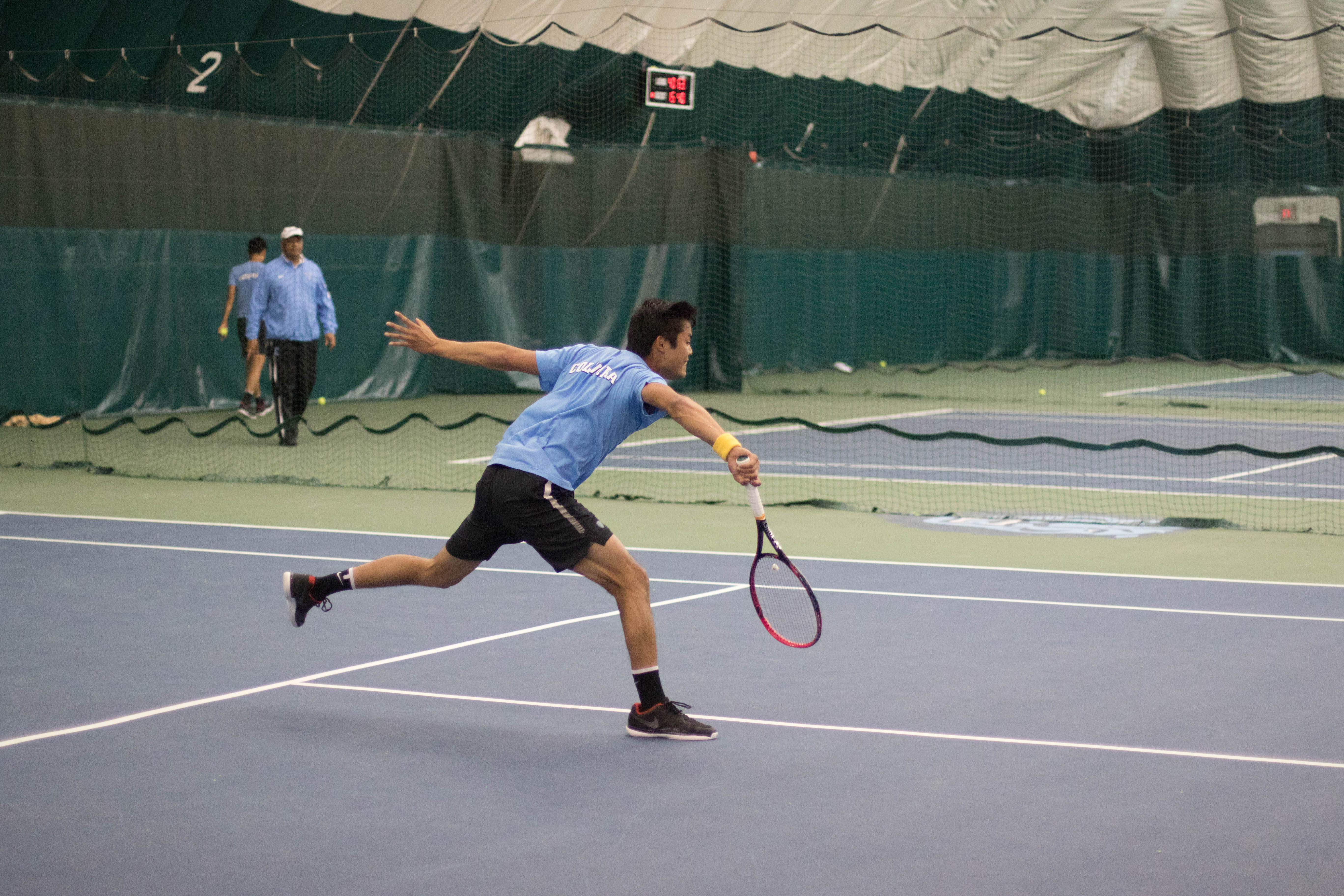 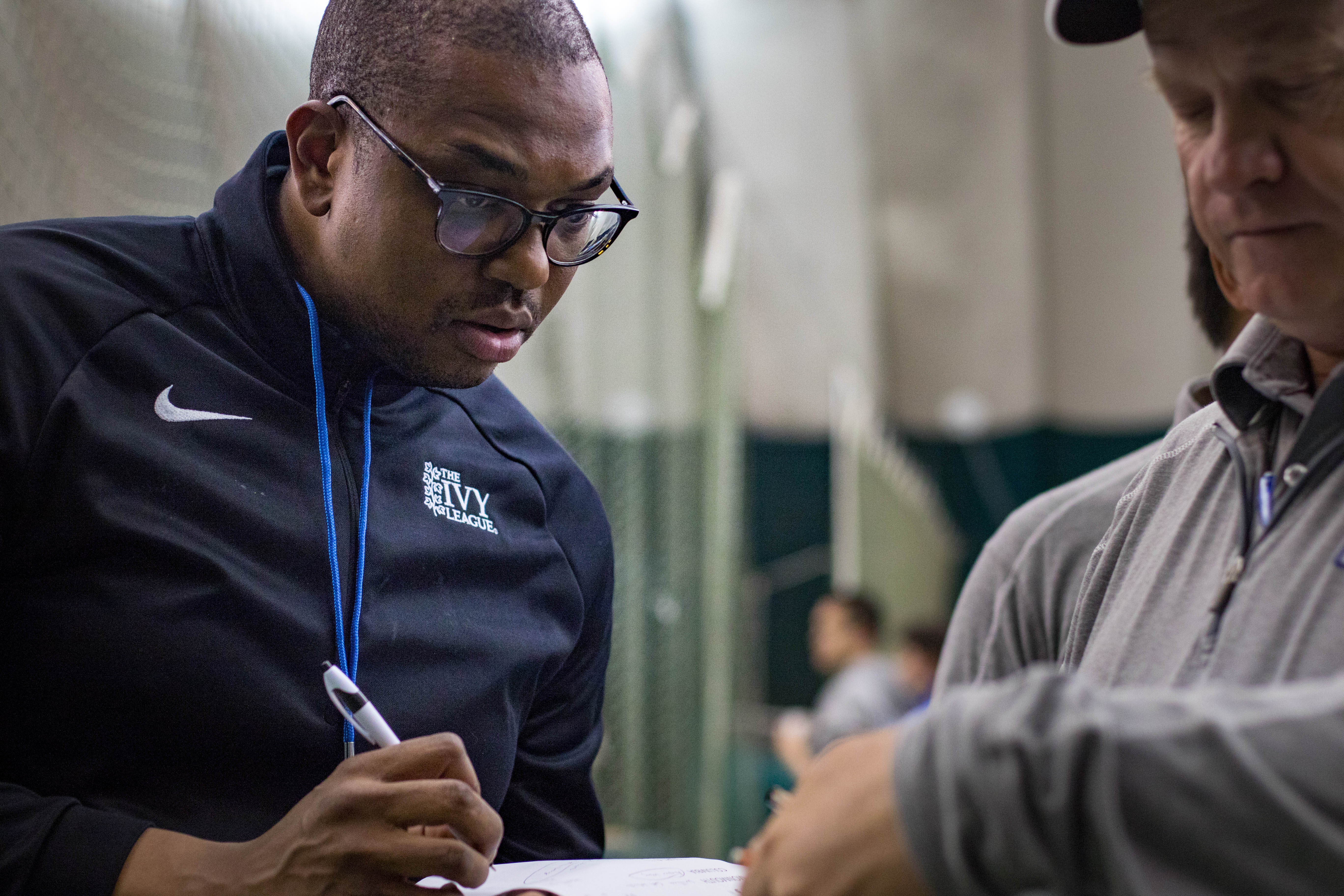 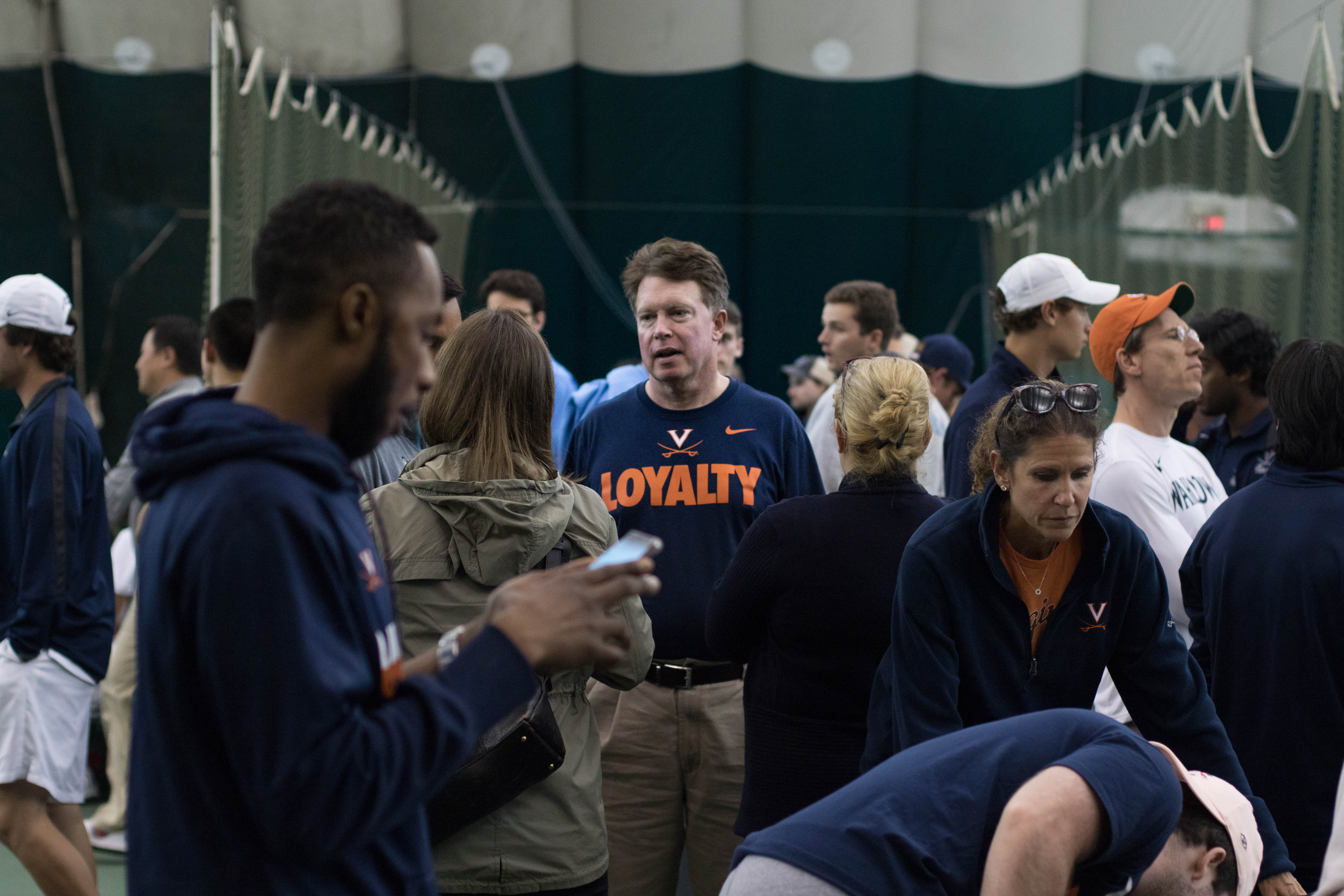 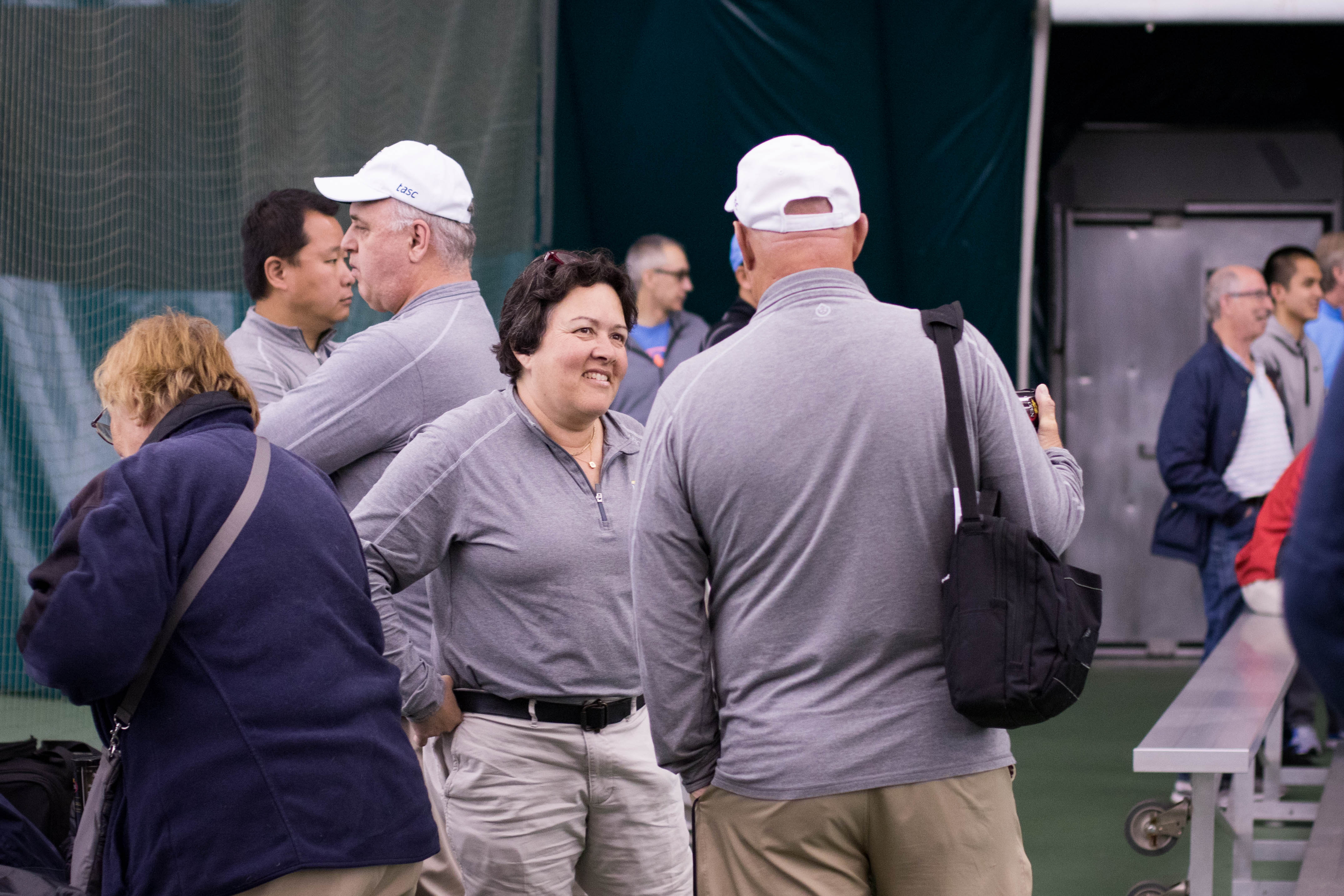 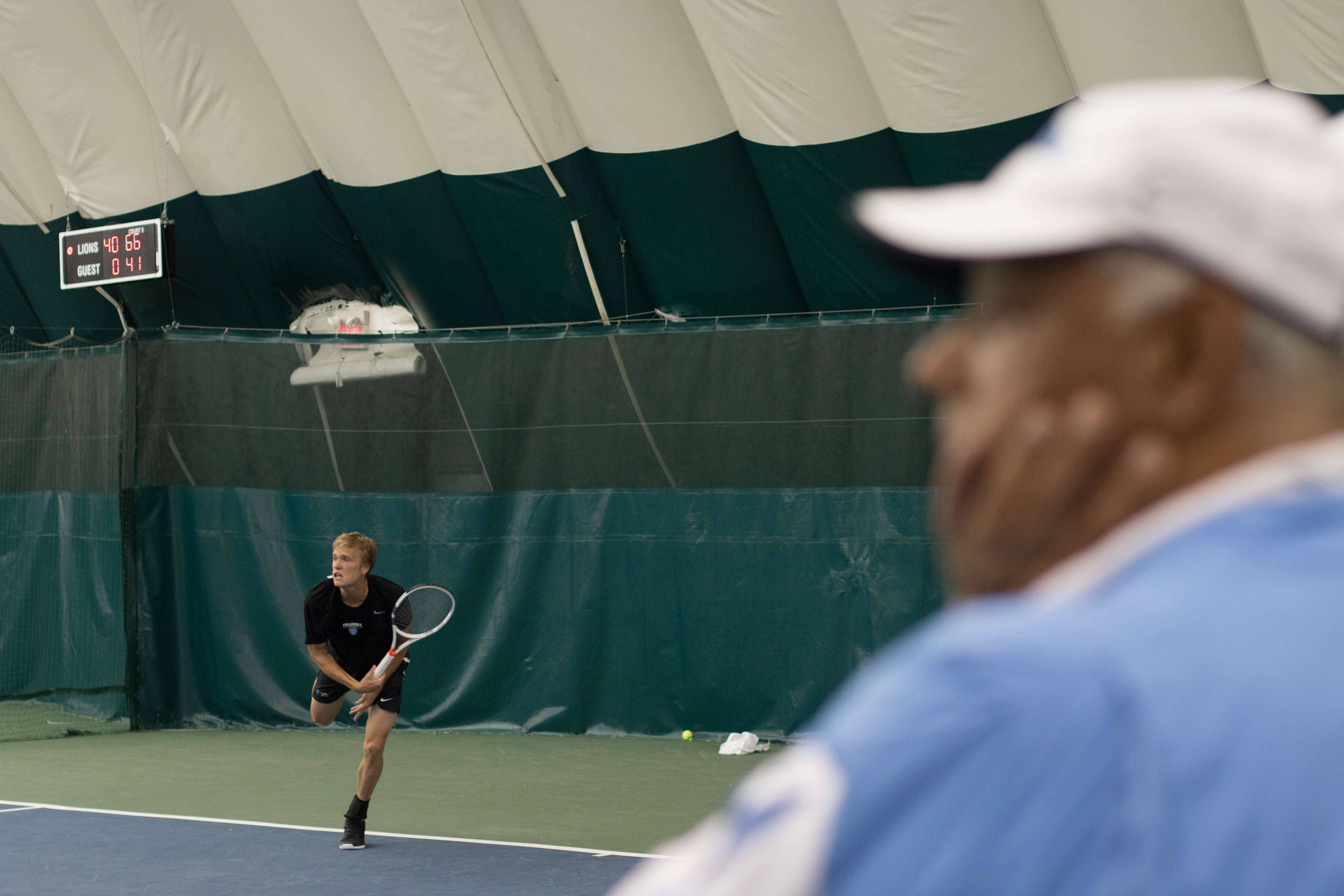 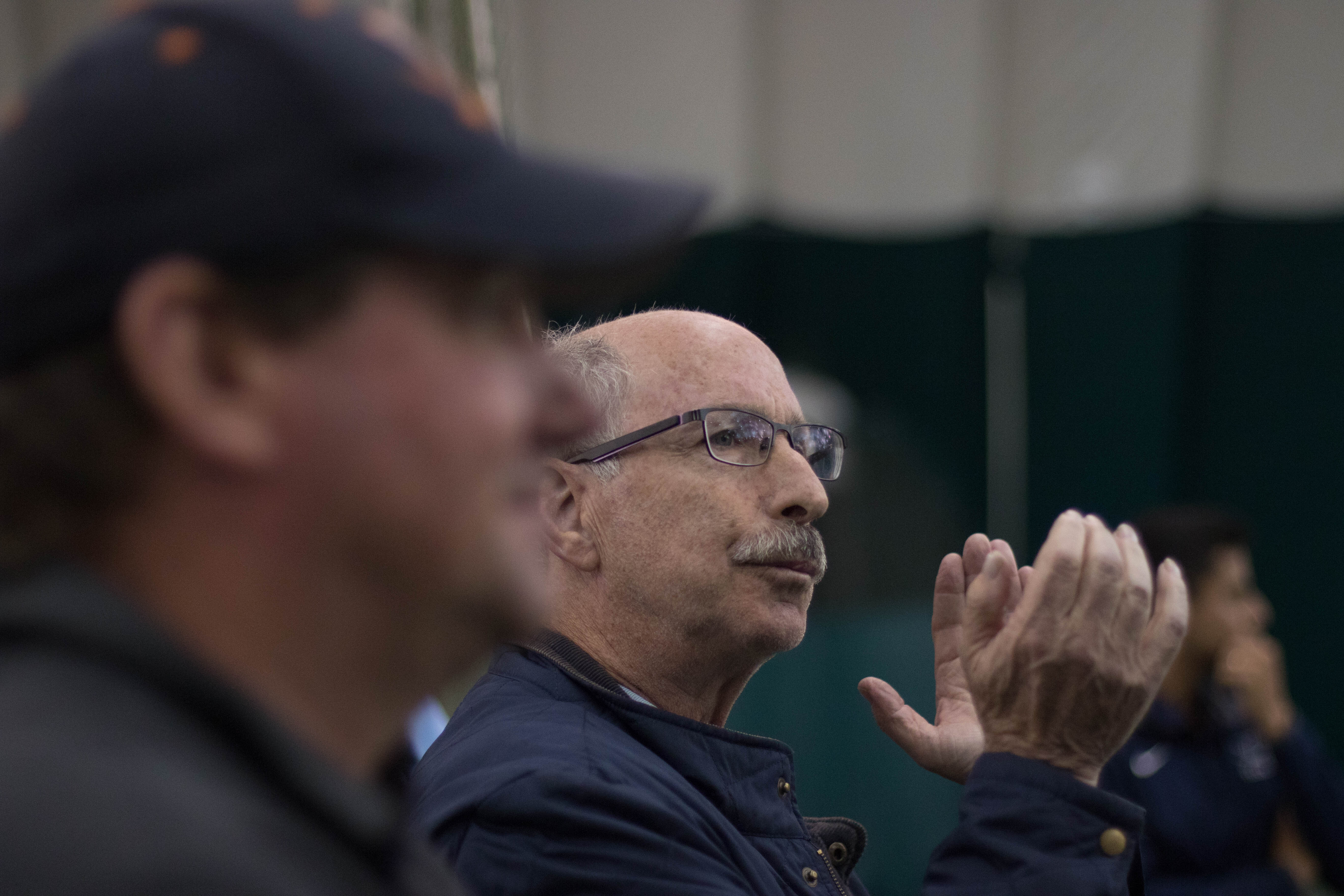 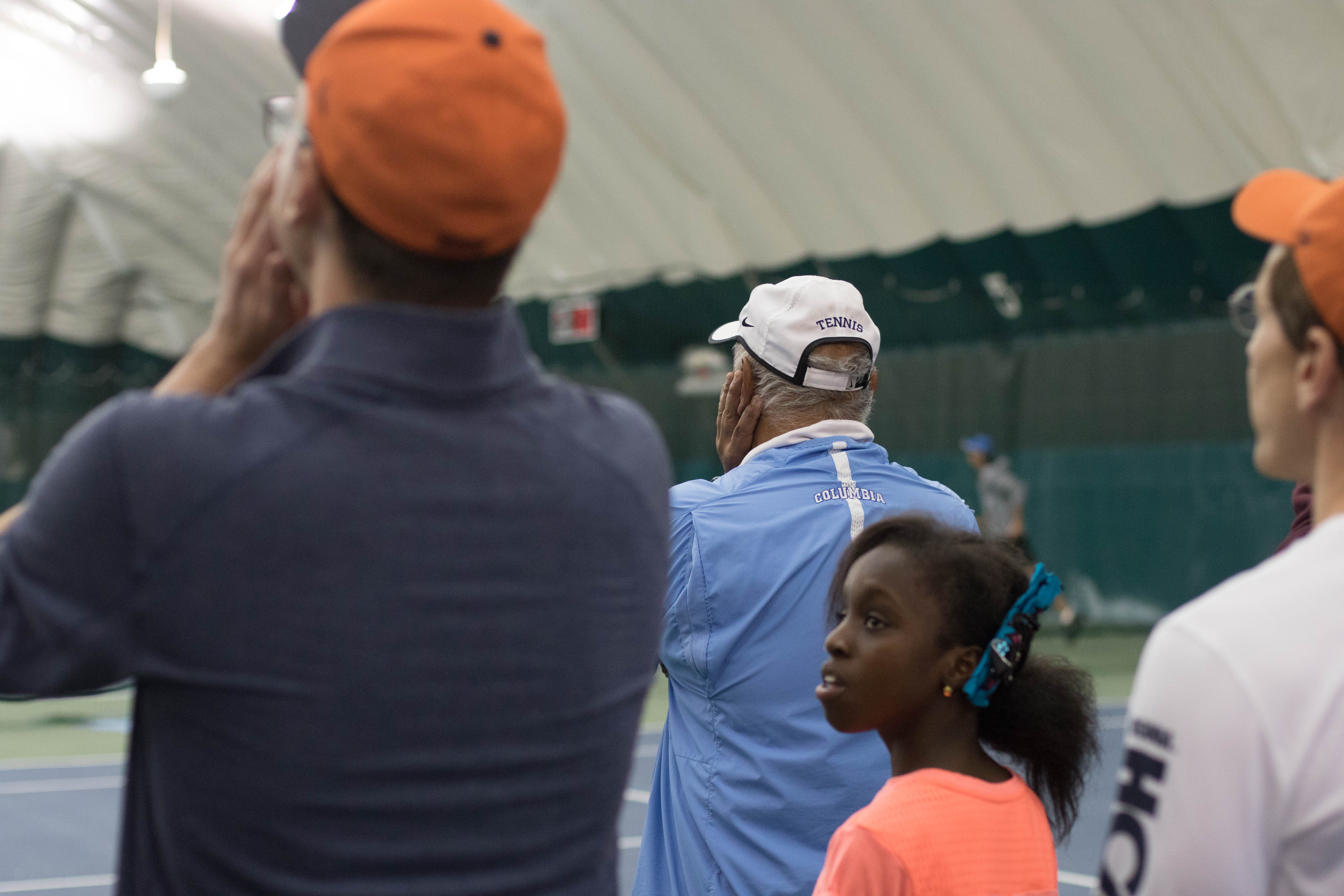 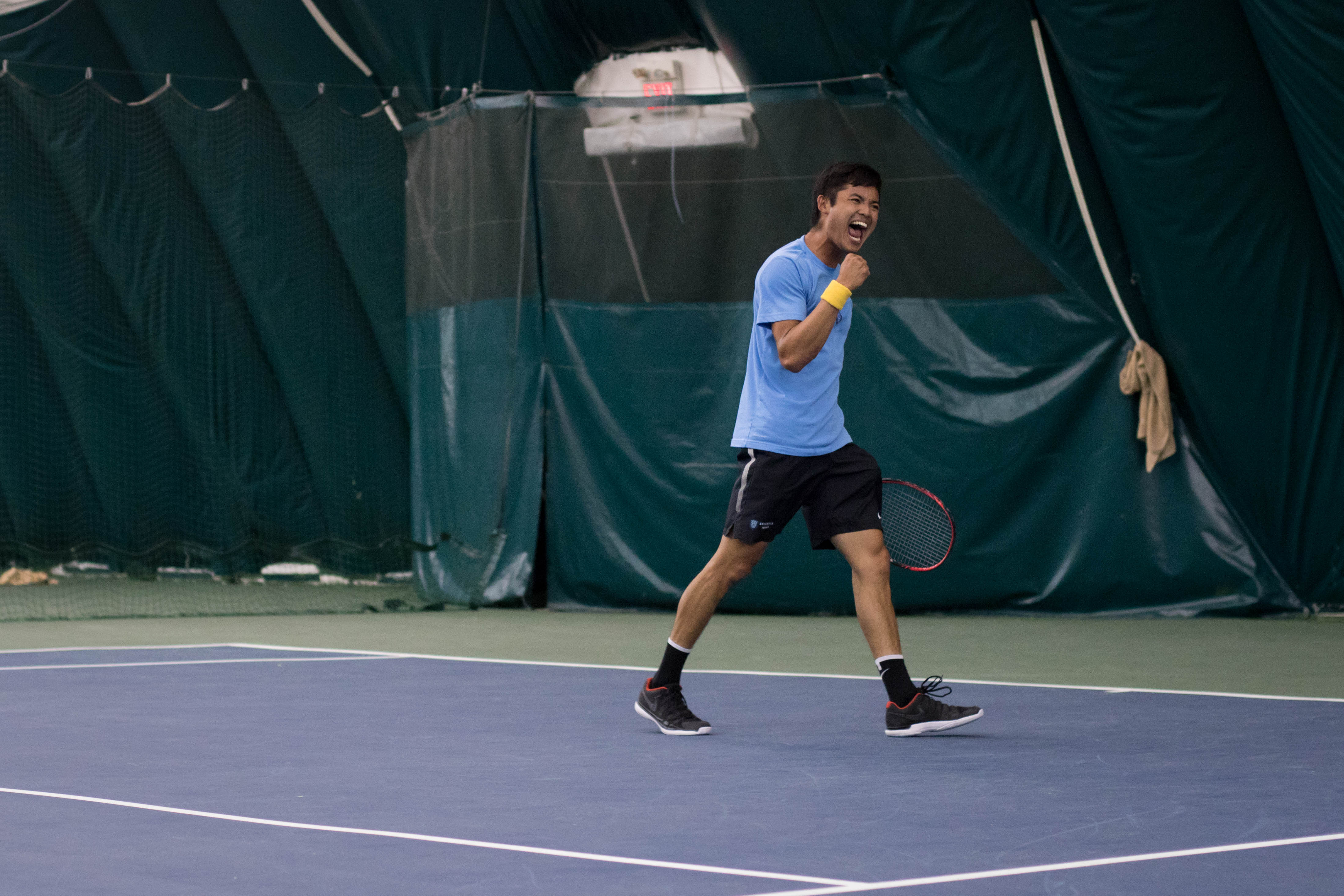 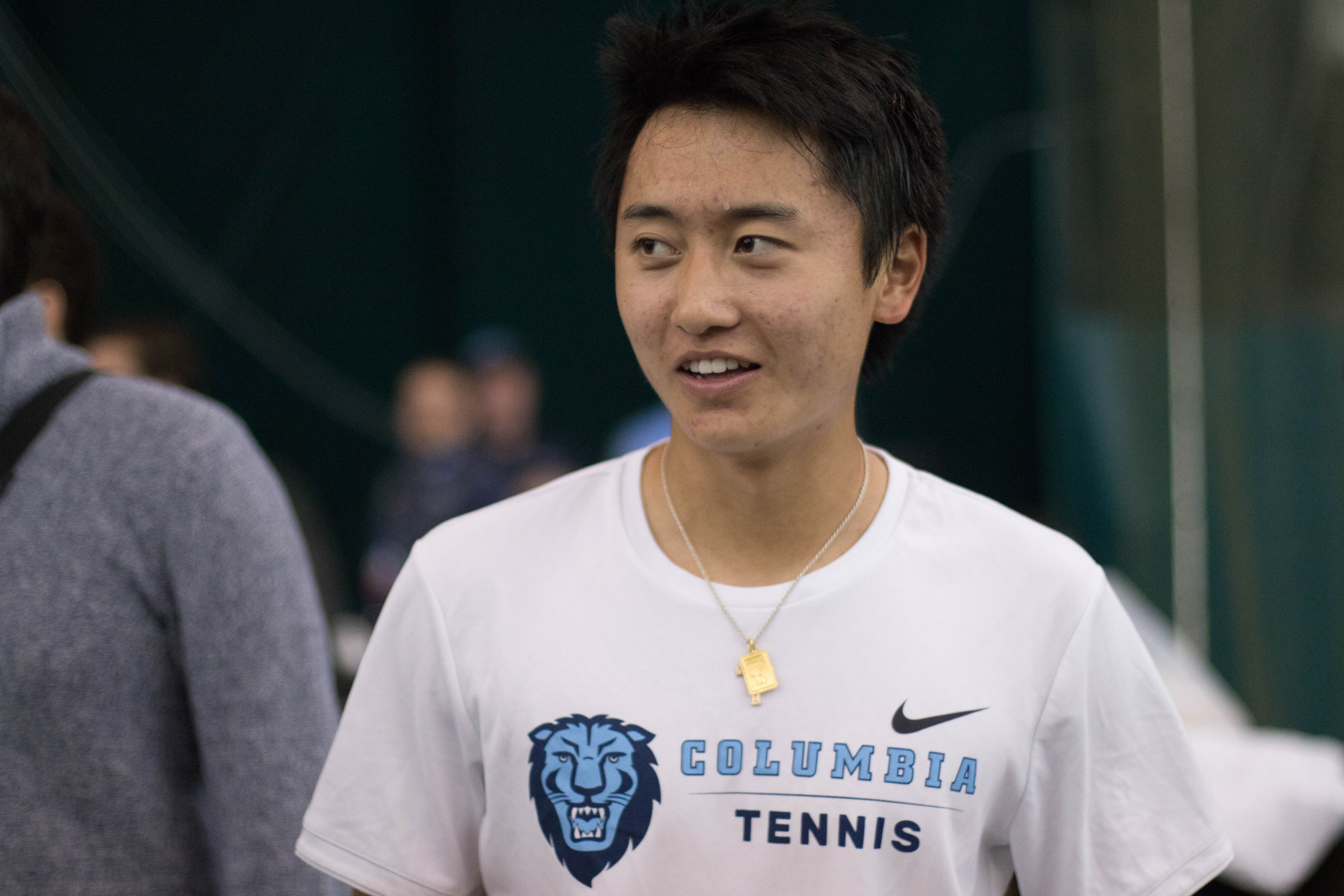 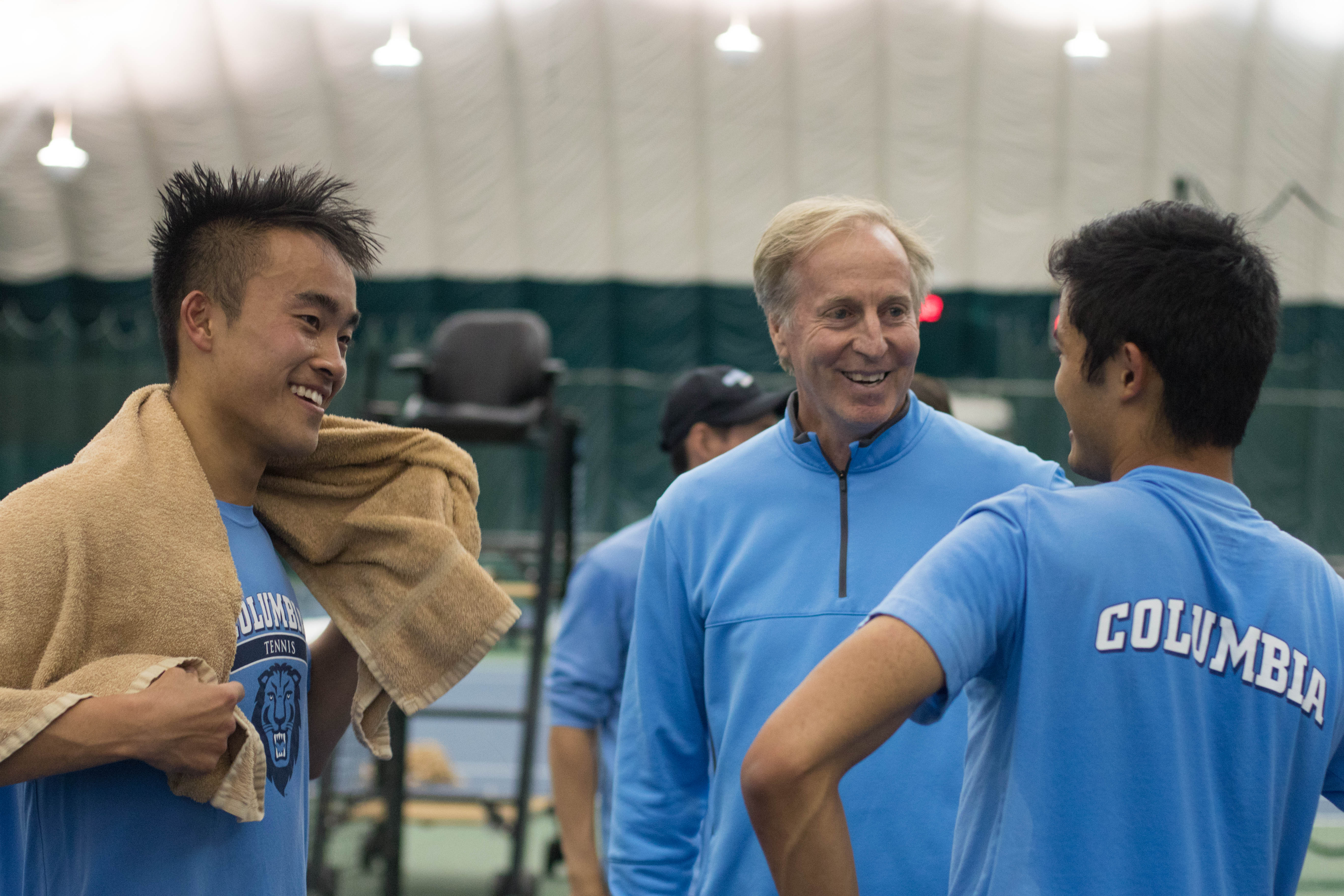 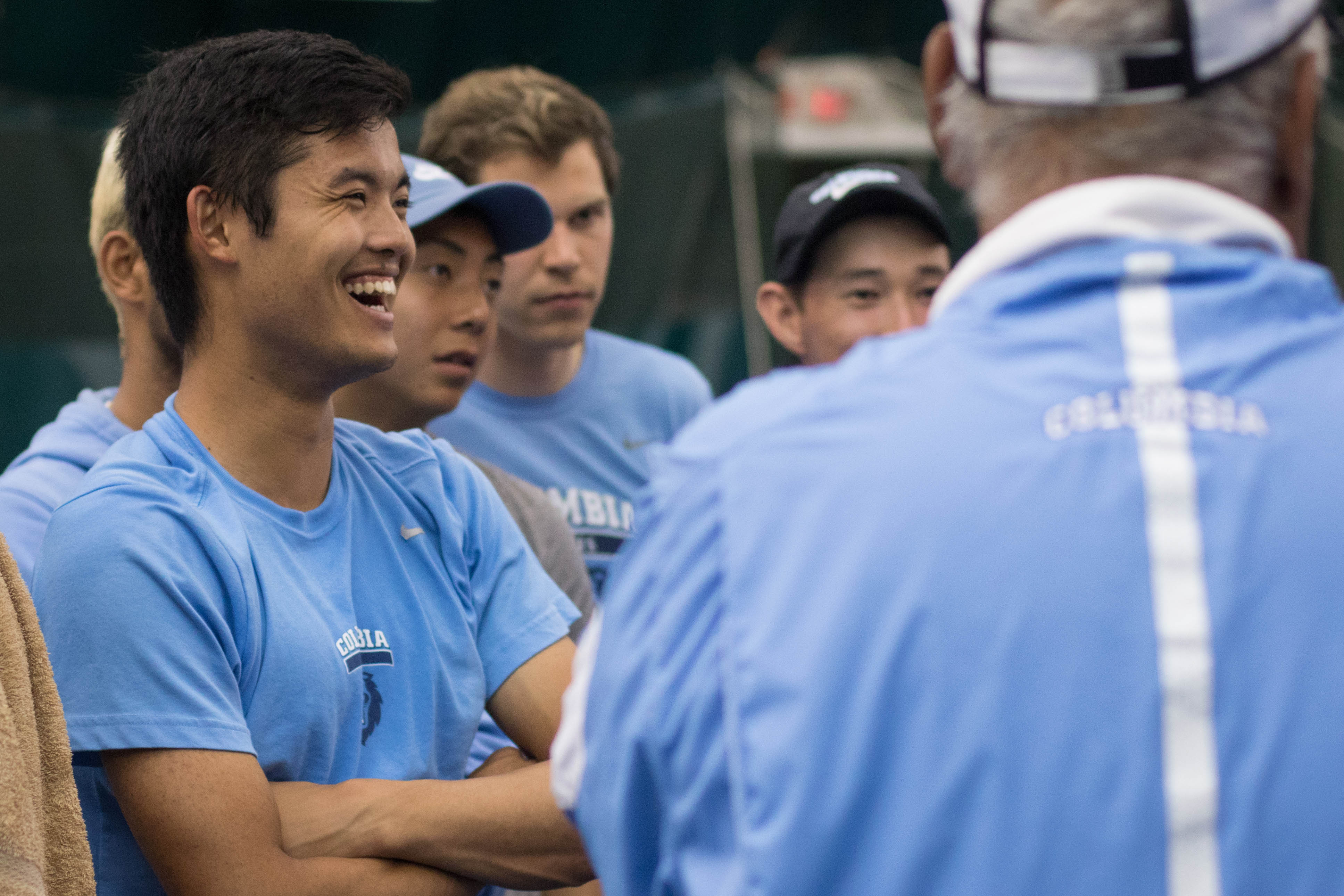 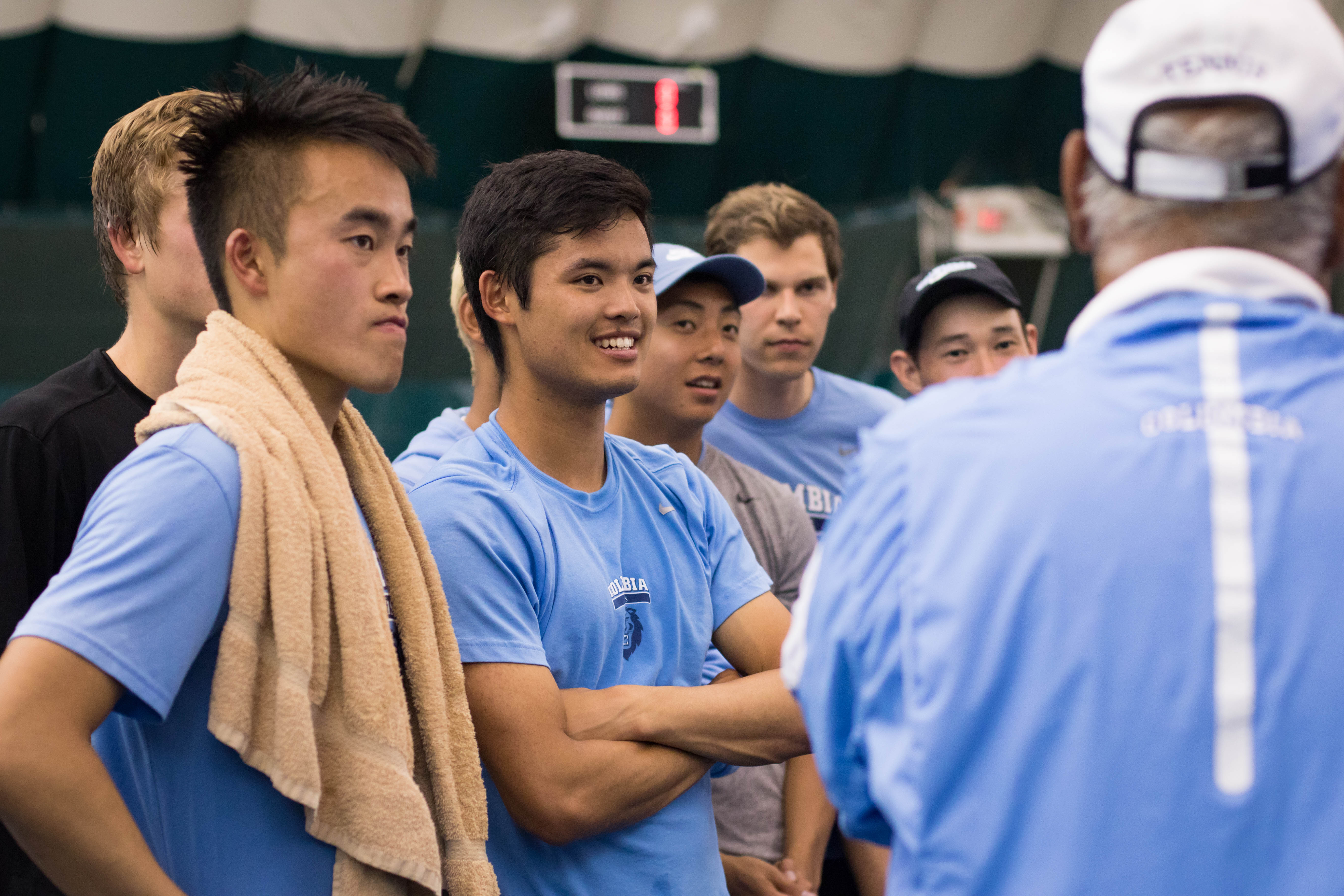 For men’s tennis and possibly the rest of college tennis, three-time defending NCAA champion Virginia has always been a Goliath. In particular, for Columbia, a small Ivy League school with no scholarships for athletes or outdoor courts, defeating the ACC powerhouse was that much more of an arduous task.

But after Columbia won two matches at Virginia’s home courts in Charlottesville in January to qualify for the ITA National Men’s Team Indoor Championships, and Virginia, in stunning fashion, lost two matches at home, there was an overwhelming sense that this season could be the year Columbia finally got over its Virginia problem.

As Saturday’s drama-filled, two-borough 4-2 victory for the Lions proved, Columbia was completely ready for its moment, as David finally triumphed over Goliath after getting seven shots at victory.

While this was not the same Virginia team, and the Lions were favored to win the match as NCAA Regional hosts for the first time in program history, the victory was still a surreal accomplishment for the team, according to 36-year head coach Bid Goswami.

“You can’t write a better script,” he said. “I think it’s a really good thing for our program.”

After both the Lions and the Cavaliers cruised past Monmouth and VCU, respectively, in opening-round 4-0 victories, the teams clashed in the second round looking to advance to Winston-Salem, North Carolina for a date with Wake Forest, which topped South Carolina 4-1 after the Lions’ victory.

The teams were originally supposed to play at 12 p.m. at the USTA Billie Jean King National Tennis Center in Flushing Meadows, New York, because Columbia is the only ranked Division I school without its own outdoor courts. Since the indoor courts at the facility were not available, the teams were initially slated to play at Columbia’s home facility: the Dick Savitt Tennis Center.

But after the rain momentarily cleared up, much to the delight of Virginia, the three-person NCAA committee decided to send the Lions back to Queens to play outside at the National Tennis Center—despite imminent rain.

A little bit after 3:50 p.m, nearly four hours after the original start time, the match began at last, and Columbia jumped out to a quick advantage in doubles.

At first doubles, the No. 41 pair of junior Victor Pham and sophomore Jackie Tang was unphased by the wind and cold weather and topped Virginia’s No. 67 duo of Carl Söderlund and Matthew Lord 6-2 to put the Lions one doubles-set victory away from clinching the doubles point.

At third doubles, senior Michal Rolski and sophomore Adam Ambrozy would finish strong, as Ambrozy smashed home a volley to clinch a 6-2 victory and give Columbia the cherished doubles point and a crucial 1-0 lead going into singles play.

Then, an extremely light drizzle began falling. The rain was approximately 30 minutes away from strengthening, but there was still a window where singles matches could begin. And so they did.

The Lions started off slow in singles play, with five of six courts down breaks early on, perhaps feeling the weight of the heightened stakes. The crowd was tense, as the drizzle slowly began to intensify, and the matches continued.

But this season, the strength for the Lions has been the back-end of the lineup, and both first-year Austen Huang and Wang, playing at fifth and sixth singles, respectively, brought perfect records in Ivy League play into the NCAA Championships looking to do their part in propelling the Light Blue into the Sweet 16.

Despite falling down a break early, both Huang and Wang broke their respective opponents to clinch first-set victories just as Tang fell in his first set.

With first sets knotted at two apiece and the slight drizzle persisting, first-year Jack Lin had a prime opportunity to take the first set with the Cavaliers’ Gianni Ross on serve. Ross, who was the No. 2 ranked recruit in the class of 2017 and collected numerous accolades before coming to Virginia, had played as high as the first position for Virginia and head coach Andres Pedroso this season.

But Lin, after an intense week of preparation, was ready for the moment. It was 15-40, with Ross on serve, and set point for Lin. The Columbia first-year did not flinch and won the point to give the Lions their third first-set victory.

Meanwhile, at fourth singles, Ambrozy was knotted in a battle with Virginia’s Kyrylo Tsygura. Ambrozy, who faced a 5-3 deficit with Tsygura on serve, rattled off three straight games to take a 6-5 lead, and an opportunity to take the first set.

But Ambrozy could not hold on serve, and the set would head to a tiebreaker. Tsygura served on the first point of the tiebreaker, and Ambrozy muscled his way to a 1-0 lead after winning the point.

Right as Ambrozy had seized the momentum, the match was instantly stopped as a Virginia assistant coach cleverly pleaded with the umpire to check the courts for condensation. After the umpire determined that the surface was no longer playable, play on all six courts was halted.

The teams and spectators, alike, did not know whether play would shortly resume, or whether the teams would trek all the way back to the Dick Savitt Tennis Center in New York City traffic.

Goswami, Pedroso and their respective teams gathered in the lobby of the National Tennis Center to wait out the delay, and after conferring with NCAA officials, a decision was made to send the teams back to the Savitt Center.

On the hour-long journey back to the bubble, Wang noted that the team was firmly focused on the task at hand: finish what it had started.

Pedroso added that he told his team that distractions pop up in all stages of tennis.

While staying the course proved difficult for the Cavaliers, the teams arrived at the Savitt Center and were given ample time to warm up after the long delay.

Play began once again at 7:55 p.m., and right away the energy that had been dormant during the rain delay surged back into the match, as Huang won a deuce point approximately 30 seconds after play resumed.

The Lions did not look back from there.

First to finish was Huang, who topped Virginia’s Matthew Lord 6-4, 6-1 to give the Lions a 2-0 lead. Huang’s resurgence after a difficult fall proved critical for the Light Blue.

“I’ve played him [Lord] before in juniors, so I knew what to expect,” Huang said after the match. “I won last time, but I know he’d gotten a lot better. He had a really great fall, and he’s had a great season, and I knew that I had to be at the top of my game to beat him.”

At first singles, Pham extended his match with Söderlund by fighting back in the second set to force a tiebreaker, but eventually fell 6-1, 7-6(5) in narrow fashion. At second singles, Tang similarly was defeated by Lizen, 6-2, 6-3.

But Lin, building on a strong first set, nailed the coffin down on Ross, and rattled off seven straight games en route to a 6-4, 6-1 victory. Lin, who battled illness and injuries throughout the year, praised his coaches and teammates for aiding his preparation for the spotlight.

After Lin’s victory the Lions needed just one more match. With Ambrozy serving for the second set at 5-3, and Wang serving for the match at 5-1, things appeared as if Columbia was on the brink of finally overcoming Virginia.

And after Wang’s service winner, the task was completed. And while the team celebrated, and the spectators were relieved, it’s not as if this win was surprising. Columbia was favored to win, and Virginia was not the strong team it had once been.

But perhaps this victory meant more because it served as a testament to the culture that the Lions have built over the years. No flukes, no upsets, just normal and expected.

“These guys really from day one, they really brought it,” Goswami reflected. “And now, we’ll head to Wake Forest.”

The team will battle No. 1 overall seed Wake Forest in Winston-Salem at Wake Forest’s home courts. With play set to begin at 4 p.m. on Friday, Goswami is optimistic that his team will be ready to perform.

And maybe David will triumph once again.