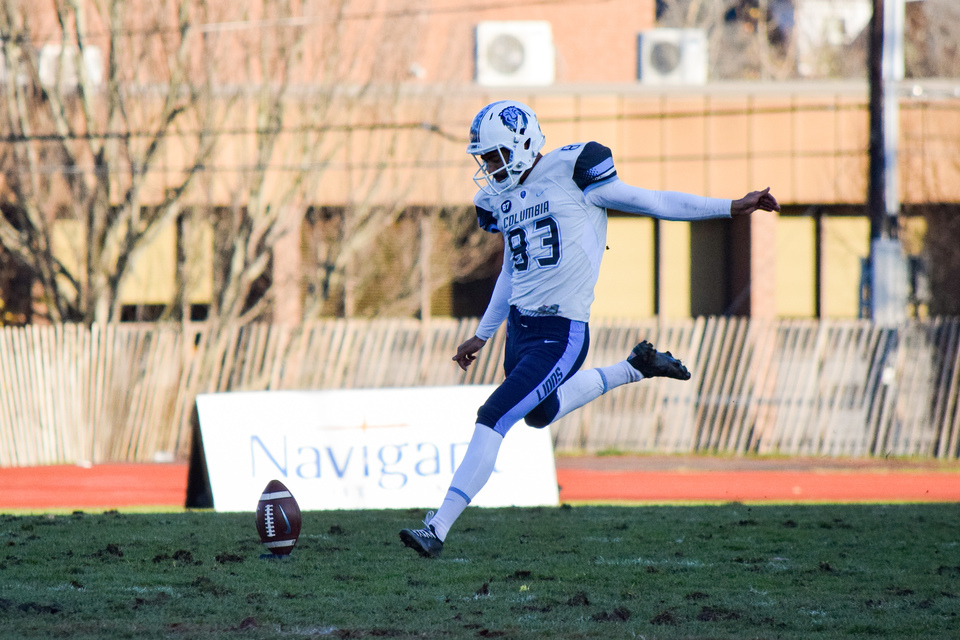 At halftime, football went into the locker room at Brown Stadium down to the Bears 20-14. Brown came into the game at 1-7 overall and 0-5 in the Ivy League and was hoping to send its seniors off on a high note in its final home game of the season.

Three big plays—eerily reminiscent of Harvard a week ago—gave the Bears all three of their touchdowns, and the overwhelming sense was that the game was headed for a shootout.

After a halftime speech (let’s call it that) from defensive coordinator Paul Ferraro, Columbia scored 28 unanswered points, shut out Brown in the second half, and dominated in every facet of the game en route to a 42-20 victory. This column will focus on how exactly football accomplished this feat.

Senior wide receiver Kyle Castner had the game of his life at the perfect time, scoring FIVE touchdowns.

When Kyle Castner came to Columbia, he joined the Lions coming off a successful career as a quarterback in Indianapolis. He was named Mr. Football, was a Class 6A State Champion, and hoped to carry his success as a signal caller into New York.

Castner did not play for the first two years of his career, and made the switch to wide receiver during the spring of 2017. The logic for Bagnoli and company was that Castner had a far better opportunity to see the field as a wideout rather than a quarterback, given that he was buried on the depth chart.

This season, with Wainwright out for the season and Smith seeing limited action with a high ankle sprain, Castner emerged as a reliable target for the litany of quarterbacks (an astonishing six have seen the field for the Lions this season), but he still struggled to find the end zone. Despite hauling in a team-leading 38 passes and 370 receiving yards, Castner does not have a touchdown catch this season.

Yet, amid all of the injuries, Castner has found his opportunity to find the end zone—at quarterback.

Castner debuted as the short-yardage quarterback with first-year Ty Lenhart pressed into the starting role and collected his first touchdown of the season against Harvard. With two career touchdowns coming into the game against the Bears, few could have anticipated Castner’s five-touchdown performance with two passing scores and three rushing scores.

Again, he had two career touchdowns, let alone this season. Now, he has seven. Just remarkable.

After the game, many players including Castner and senior safety Landon Baty noted that Ferraro’s speech at halftime was quite the motivating factor.

No players would provide specific details as to what exactly was said, but Ferraro has been known to shout Monster energy drink-infused, expletive-laden tirades in the coach’s room—which sits conveniently close to the press box.

I imagine that there were a few expletives in the speech at the half—and for good reason. The Bears were a decidedly worse team than Columbia entering the game, and the Lions needed a wake up call.

Whatever was said, it really did work. Ferraro had to be pleased with the team’s effort which yielded an eye-popping 10 sacks, two interceptions, no points allowed in the second half, six total first downs allowed, the list goes on and on. The Lions were just that good yesterday.

Daniel DeLorenzi is the best pass-rusher in the Ivy League.

Whichever number it is, and although the totals don’t yield a consensus, DeLorenzi has established himself as the best pass rusher in the Ivy League—statistically speaking.

DeLorenzi was a championship wrestler in high school, and made a significant effort during the offseason to lose some weight and improve his speed.

Perhaps it’s safe to say that effort panned out.

Chris Alleyne broke another record, and he wasn’t even the starter coming into the year.

I have written about Chris Alleyne almost every column because the senior’s season has been that remarkable. Even in losses for the Lions, Alleyne’s excellence has stood out from the get-go.

Although Alleyne had a rare off game kicking field goals, he did manage to shatter a Columbia record for most points in a season by a field goal kicker. Again, Alleyne had never attempted a field goal coming into this year, and was listed behind incumbent junior starter Oren Milstein.

With Milstein sidelined with a quad injury all season long, Alleyne was able to find a chance to see the field, taking the Ivy League by storm. Adding another record to what has already been a great season for Alleyne is just the icing on the cake.

But two seasons ago, the Lions’ victory against Brown—just the third of that season—was a sign of positivity to come in the next two seasons. After returning to Brown Stadium two years later, Bagnoli’s team has the look and feel of a true Ivy League title contender.

As I’ve said all year long, while this season’s opportunity is lost, this team is built to win. The outstanding performance of Lenhart, fourth-string running back Ryan Young or the rest of the defense was not even mentioned in this column.

The bottom line is that there was that much that went right for the Lions. The team and its fans drove home happy.

Look for sports editor Christopher Lopez’s analysis on Monday mornings after each football game this season. To read more coverage, head to columbiaspectator.com/sports/football.