Point After: Superior special teams and a little magic lift football over Cornell

Point After: Superior special teams and a little magic lift football over Cornell 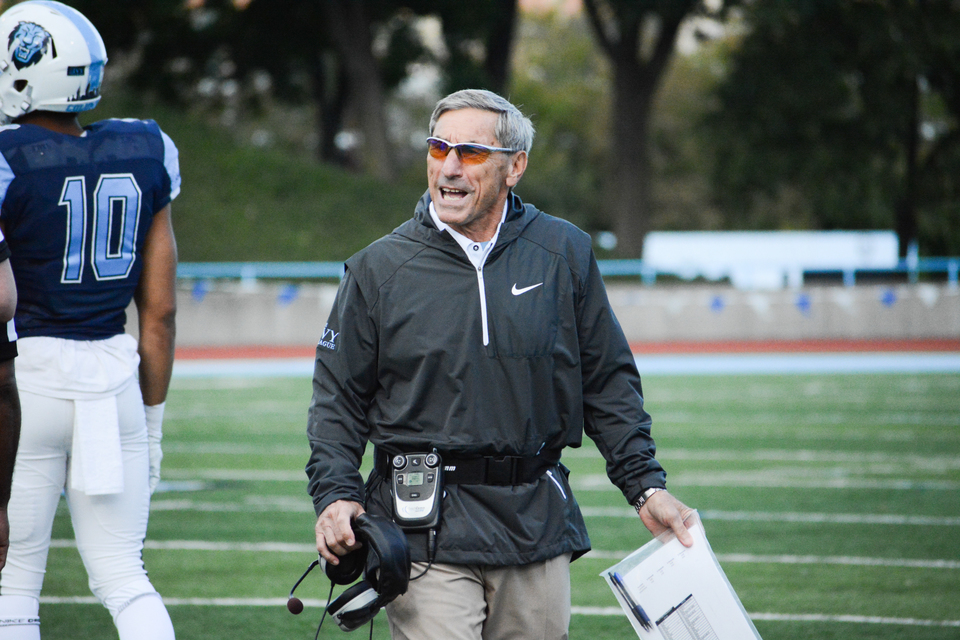 Under head coach Al Bagnoli, the Lions have now posted two consecutive winning seasons for the first time since 1961-2.

With 12 seconds left in the game, the win was sealed. The Lions had stopped the Big Red on fourth down and pulled out a miracle comeback.

Amid the celebration, senior safety and captain Landon Baty knelt near midfield.

The moment lasted about six seconds before Baty popped up, clearly excited, and sprinted to join his teammates in victory formation. First-year quarterback Ty Lenhart took one last snap to run out the clock.

After the game, Baty broke down during the press conference when asked about that brief moment.

“I was just sad,” he said through tears. “I'm just so happy. You put your heart and soul in this and for Mikey to do that at the end was just awesome. It’s been a journey with Mike, Bert, Kyle—I took a moment there to take it in and it’s kicking in now that it’s over. My mom always told me to leave something better than when you found it, and it looks like we’ve done that in a big way.”

The victory nailed down Columbia’s first pair of back-to-back winning seasons since 1962, when John F. Kennedy was President, head coach Al Bagnoli was nine years old, and Columbia University did not admit women.

And if not for the heroics of first-year returner Mike Roussos, the drought—Division I’s longest—would have endured yet another year.

The reality is Columbia should not have won this game. The fact that the Lions had as many wins as quarterbacks that saw the field this year is a testament to just how crazy this season was. And while Bagnoli won Ivy League coach of the year a season ago, perhaps this accomplishment was his greatest act of magic.

Cornell won almost every facet of this game, except one crucial portion: special teams.

Mike Roussos was not listed on the preseason depth chart. Junior Josh Wainwright had established himself as an elite punt returner in two seasons at Columbia, and when he went down, his backup sophomore Darion Acohido assumed the return duties.

Sophomore kick returner Will Allen flashed signs of brilliance with an eye-popping 91-yard return against Princeton earlier in the season, but after he was mired in a bout of inconsistency, Bagnoli went to yet another first-year in Roussos.

Bagnoli admitted that the coaching staff must not have evaluated the depth chart properly to start the season. This isn’t to take credit away from Wainwright, Acohido, or Allen, but it suggests that Roussos has every making of an elite returner.

There may have also been a fair amount of luck involved in each return: Certainly, the Lions blocked very well, but the Big Red was also incredibly poor on return coverage, particularly on the fateful squib kick.

Whether it was luck, skill, or circumstance, Roussos stole the show, sending the seniors out with a bang. No player in Columbia history has accomplished what Roussos did Saturday, at least since the 1940s.

Roussos was not the only standout on special teams, however, as senior kicker Chris Alleyne was perfect on all four of his attempts (three PATs and one field goal) to finish off a stellar season. He will garner significant consideration for first-team All-Ivy League as a kicker, something few would have anticipated given that Alleyne had never attempted either kick coming into this season.

That perfection was welcomed by Bagnoli, who noted that while the statistics showed that Cornell dominated the game in terms of yardage, special teams play was the difference-maker.

While Lenhart struggled to make throws all game long, one particular pass—a 25-yard completion to junior wide receiver Kaleb Pitts—changed the course of the game for the Lions.

Kaleb Pitts has had a bit of an odd season for Columbia. Statistically speaking, he led the Lions in yards per reception with 17.1, but only had 17 catches all year long.

Perhaps no catch was more important than his 25-yard reception on third-and-14, where he hauled in a desperate heave from Lenhart surrounded by two Big Red defenders to get a much-needed first down.

Lenhart was flushed in the pocket and had to scramble backwards to evade a sack, getting just enough on the throw. Had Lenhart held the ball for a split second longer, he would have been sacked for a massive loss, forcing a Lion punt from deep in their own territory.

At first, it appeared as if the ball was headed straight toward a Big Red defender. But as the Cornell player lifted his right arm up, Pitts leaped in front of the defender, catching the ball, and taking the open space ahead of him to accrue a few extra yards after the catch.

This highlight-reel catch was part of a 13-play, 75-yard drive that allowed Columbia to retake the lead 17-14. The touchdown—a one-yard scamper by senior Kyle Castner—was the team’s sole offensive touchdown of the game, and put Columbia in a position to secure the victory.

But Cornell scored the go-ahead touchdown with 58 seconds left, leaving the Lions with just one timeout to drive up the field and score the game-winner.

Al Bagnoli is a hell of a coach.

Standing at a generous 5 feet, 5 inches, Bagnoli does not have what one would call an intimidating build. Yet he stalks the sideline with authority—and he has every right to do so with nine Ivy League titles to his name.

This was his 26th season as a coach in the Ivy League. Before now, he had never had a team use six quarterbacks in a season. He had never used as many first-years.

Bagnoli has coached many teams toan Ancient Eight title, and while Columbia has not yet captured that elusive second crown since he took over in 2015, this year was Bagnoli’s finest as a coach.

Considering the amount of obstacles thrown at this team from the second quarter of the first game when the team’s most accomplished offensive player was lost for the season down to the final minute of the fourth quarter of the last game, Bagnoli’s presence willed the team to victory.

Yes, a coach can only make so much of a difference. Bagnoli didn’t make any of the plays that led to football’s six wins this season. But as Baty said in the press conference, each and every player wearing Columbia’s uniform puts their heart and soul on the line every game because of the culture that this man has built.

There are more tangible things that this column could have discussed—the fact that Columbia will return a boatload of talent and be extremely competitive in the Ivy League next year, the fact that 14 wins in two seasons is the most since Columbia joined the Ancient Eight in 1956, and the list goes on and on—but the legend of Bagnoli felt like an appropriate send-off.