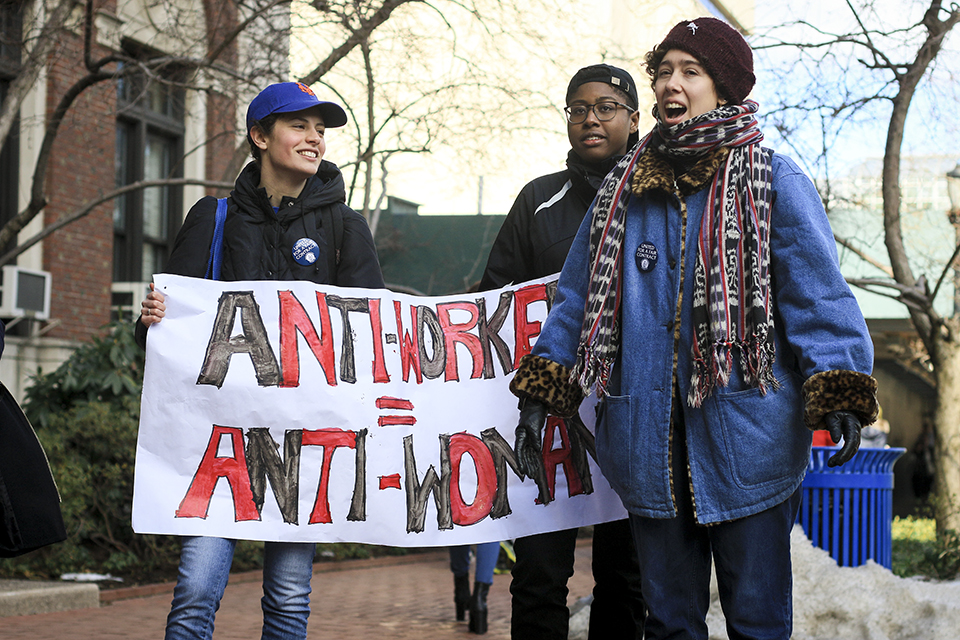 Members of the contingent faculty union and Student-Worker Solidarity celebrated the first contract at a rally on Thursday.

Just a few days before a strike deadline that could have caused major disruptions for students and faculty, Barnard College and the Barnard contingent faculty union have reached an agreement on a “tentative” first contract.

The agreement comes as the negotiations, which had grown increasingly contentious over time, reached the one-year mark. The contract—which addressed outstanding proposals regarding wages and benefits, job security, and union rights and procedures—was agreed to but not officially accepted by the union early Thursday morning. It must be approved by a simple majority in a vote by the union’s membership to take effect for the 2017-2018 academic year.

The agreement avoids the possibility of a strike beginning Feb. 21, which would have caused college-wide disruptions as over 150 adjunct, term, and other full-time non-tenure-track faculty teaching this semester would have potentially been on the picket line.

In an interview with Spectator on Thursday, Provost and Dean of the Faculty Linda Bell said that she is pleased with the contract as well, although she is unable to comment on it before it is finalized by the union.

“Both parties worked really hard to come to this tentative agreement, and I applaud the efforts of all of those people involved,” she said. “This is really a moment to celebrate.”

Bargaining committee member and former adjunct dance lecturer Siobhan Burke, BC ’08, said that she thinks the contract is a successful one.

“In a lot of ways, it absolutely is what we set out to accomplish,” she said. “I think it sets, in some areas, very high standards for union contracts nationally for contingent faculty—and I think that’s great, that’s what we were hoping to do.”

Details of the contract are expected to be released within the next few days.

The avoidance of a strike comes as a relief to both the college and the union, both of which had expressed hope in recent weeks that the negotiations could be resolved without the need for a picket line.

“People were definitely coming around to the idea of not teaching their classes, but I think it was hard to accept the idea of just not teaching and leaving students hanging,” Burke said. “I think faculty are relieved that they can continue teaching and not interrupt a student’s education and semester.”

Bell, who had previously stated in emails to the college community that she was “disappointed” that the union had set a strike deadline, said that a strike would have negatively affected the college as a whole.

“It’s very clear how disruptive a strike would be, with the operations in the college, with our students, and with its impact on the morale of our community,” she said.

Though Local 2110 President Maida Rosenstein, who worked closely with the union’s bargaining committee to negotiate the contract, said that she found the ultimate resolution to be “really great,” Burke noted that the negotiating team did not immediately decide to agree to the college’s proposal.

At a Student-Worker Solidarity rally in celebration of the contract this afternoon, bargaining committee member and adjunct lecturer Sonam Singh said that he wants to see the union remain active in pursuing labor rights at both the college and the University.

Both Student Government Association Representative for Inclusion and Equity Hannah Seymour, BC ’17, and Burke said they hope that the momentum generated by the union will persist.

“I feel like it’s sort of just the beginning,” Burke said. “We all need to continue to stand together.”