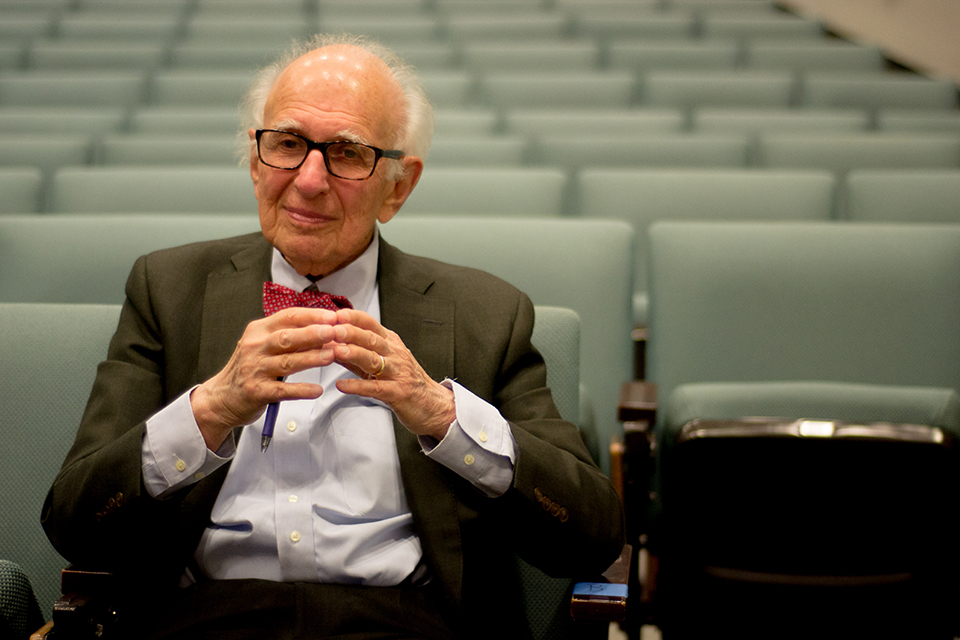 Kandel is the co-director of the Mortimer B. Zuckerman Mind Brain Behavior Institute on the new Manhattanville campus.

Nobel laureate and neuroscience professor Eric Kandel delivered a lecture on his new book exploring the connection between art and science Monday night.

Kandel was awarded the Nobel Prize in Physiology or Medicine in 2000 for his work on how the brain forms memories. He has taught at Columbia since 1974, currently runs the Kavli Institute for Brain Science, and is the co-director of the Mortimer B. Zuckerman Mind Brain Behavior Institute on the new Manhattanville campus. The book on which his lecture was based, “Reductionism in Art and Brain Science,” was published last year.

Kandel’s lecture focused on the concept of reductionism, defined as simplifying complex systems into smaller and more understandable parts. He argued that both science and art employ reductionism to arrive at “higher truths,” drawing on examples from his own research and 20th-century abstract painters. This common feature could make the two disciplines fundamentally complementary.

Many of Kandel’s discoveries about memory were made by studying the simple brains of marine snails. The most basic aspects of memory formation are common to all complex organisms, but the straightforward systems of these snails allowed Kandel to more easily work out the neural circuitry involved in making memories. This methodology, according to Kandel, is considered reductionist because it simplifies complicated systems into smaller parts.

Kandel said that his reductionism approach made his key breakthroughs possible.

“I went to the marine snail because I thought, ‘We have no insight on how memory and learning occurs,’” Kandel said. “Going to a mammalian brain, we didn’t know how to isolate circuits. I thought that would be easier to do in a very simple animal.”

In the last century, artists have also employed reductionism as their work has become increasingly abstract. Focusing on the New York Abstract Expressionist movement, Kandel asserted that breaking pictures into their simpler components produced more value in art, just as his research had in his own field.

“Art and science both use reductionist methodology to achieve their goals,” Kandel said. “Matisse said we’re supposed to attain peaceful serenity by simplifying form and figures to achieve an expression of joy.”

Kandel emphasized throughout his talk that reductionism is an example of how science and art did not conflict, and could actually support each other.

“I think science enhances art’s integrity,” Kandel said. “Science doesn’t go screwing up a painting. It encourages you to think about the art in the new way. The more new insights you can bring about how people respond to art, the more interesting it is.”