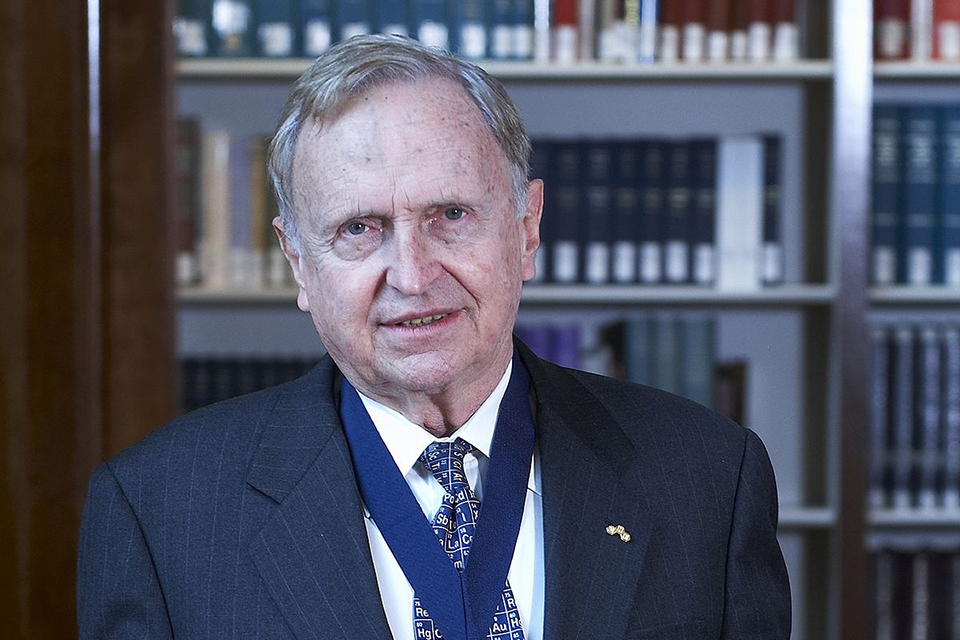 In 1981, when Columbia College began considering whether to admit women, Breslow helped author a report, now referred to as the Breslow Report, arguing that Barnard would not be significantly damaged if Columbia became coeducational.

Ronald Breslow, the Samuel Latham Mitchell Professor of Chemistry and award-winning scientist, died Wednesday. He was 86.

Breslow joined Columbia’s faculty over 60 years ago and was well-known among undergraduates for teaching organic chemistry. He was also a key player in Columbia College’s decision to admit women and taught Virginia Cornish, CC ’91, the first female graduate of Columbia College to become a tenured Columbia professor.

Throughout his career, Breslow attained a number of high honors in the scientific community. In 1996, he served as the president of the American Chemical Society, and received its highest award, the Priestley Medal. Breslow also won the National Medal of Science, along with over 75 other national and international awards for his research, and chaired other scientific organizations throughout his career.

“Ron Breslow was a towering figure in the world of science and an inspiration to all of us in the Columbia chemistry department,” Friesner said. “He had the greatest breadth of knowledge in chemistry of anyone I have encountered. … He was a warm, generous person with a boundless supply of energy and enthusiasm, and a great support to many of us throughout our careers.”

Born in 1931 in Rahway, New Jersey, Breslow went on to earn his bachelor’s, master’s, and doctorate degree in chemistry at Harvard University. Afterwards, Breslow did postdoctoral work at the University of Cambridge before joining the Columbia faculty. Breslow was offered a spot as a tenured professor at Harvard, but turned it down to remain at Columbia.

Chemistry professor Ruben Gonzalez, who worked with Breslow to publish an article about how certain biological chemicals interact with RNA, said that Breslow’s achievements as a chemist were matched by close relationships with his students and colleagues.

“Ron was not only a pioneering, unrivaled chemist and an outstanding leader of our department, university, and field, but for those of us who were his students and junior colleagues, he was also an extraordinary educator, mentor, and advocate,” Gonzalez said. “Throughout my time at Columbia, he has been a constant source of scientific, professional, and personal advice, and he tirelessly advocated for and championed both me and my work.”

Breslow’s research primarily focused on the design and synthesis of molecules. His discoveries included a compound that led to a groundbreaking cancer treatment called Zolinza, the mechanism for vitamin B1, and a theoretical concept called “antiaromaticity” that refers to especially unstable molecules.

Much of Breslow’s work was based in a field called biomimetic chemistry. Breslow is widely considered the father of this field, which involves imitating the way that biological organisms synthesize molecules, rather than trying to develop new processes from scratch.

In 1981, when Columbia College began considering whether to admit women, Breslow helped author a report, now referred to as the Breslow Report, arguing that Barnard would not be significantly damaged if Columbia became coeducational. That document helped pave the way for Columbia’s eventual decision to admit women.

“It’s important to remember that Ron’s recommendation was driven by the criterion that Barnard still be able to flourish,” Merrer said. “He was a champion of Barnard and particularly Barnard chemistry to the end. Ronald Breslow was one of a kind. I will miss him.”

Chemistry professor Jonathan Owen said that he would remember Breslow’s leadership at Columbia and his jocular personality.

“Ron had a grand vision for Columbia and for the chemistry department,” Owen said. “Excellence was high on his list of priorities, as was humor. He was always eager to make people laugh. He had a quick wit and was good at spontaneous humor. He had a captivating smile and a warmth about him that people really enjoyed.”

Breslow is survived by his wife Esther, a professor emerita of biochemistry at Weill Cornell Medical College, and their daughters Stephanie and Karen.