1968 to Now: Professors teach Columbia’s activist history and complicated relationship with Harlem in the classroom

1968 to Now: Professors teach Columbia’s activist history and complicated relationship with Harlem in the classroom 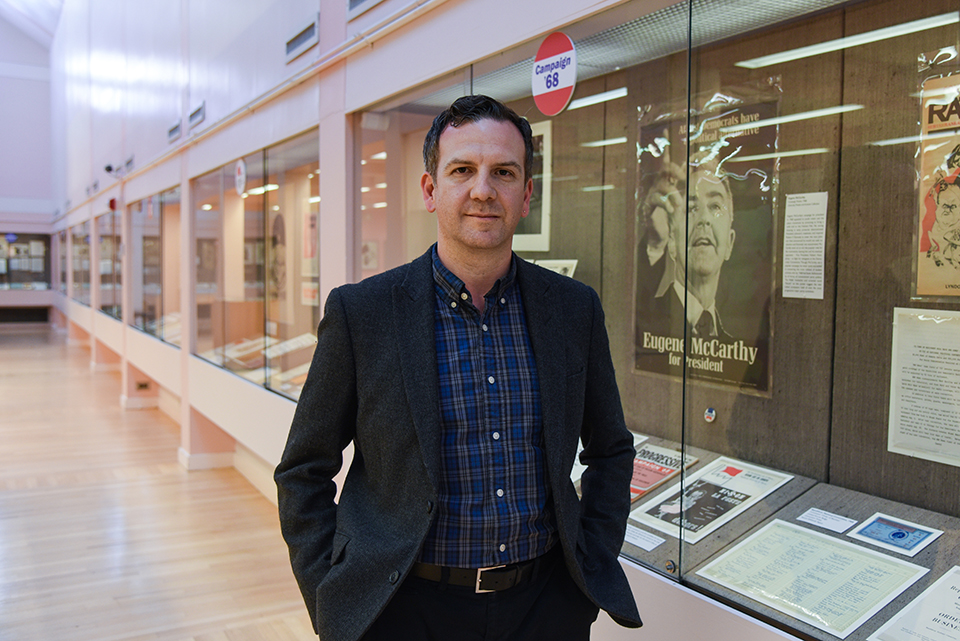 In the wake of the 50th anniversary of the historic 1968 protests at Columbia, some professors have used their classrooms as a space to discuss Columbia’s activist culture and its relationship with Harlem in connection to the events of 1968, giving students insight into a year that revolutionized Columbia’s identity.

These protests and their lasting effects on Columbia are examined in classes such as Columbia 1968, taught by associate professor Frank Guridy; The Sixties in the Archive, taught by professor of history Thai Jones; as well as in Making Barnard History and American Civilization since the Civil War, both taught by history professor Robert McCaughey.

Jones also curated 1968: The Global Revolutions, an exhibit in the Rare Book & Manuscript Library, to convey the stories surrounding Columbia’s protests to the greater community and examine the gaps in Columbia’s understanding of its own history.

“When you use archives to tell a story like this, you’re really telling a story about the institution itself,” Jones said. “The things that are there and the things that are missing really say a lot about what the University has considered important over the years.”

Jones hopes that through the installation of this exhibition more students will learn about the effects these protests have had on a national and international level when analyzing the events of 1968.

“The larger point [of the exhibit] is to connect the Columbia story into this broad context and see all the events of 1968, which go from Vietnam to Eastern Europe to Columbia to Paris,” Jones said. “You can kind of get a sense of just what [a] milestone that year was.”

In addition to the influence these protests had on U.S. history, they also shaped the outward perception of Columbia, as the University has since been known as one of the most politically active college campuses in the nation. According to Guridy, the inspiration for his class came out of the desire to give students a better understanding of Columbia’s history of activism.

Although these courses place a clear emphasis on Columbia’s past, these professors have not shied away from acknowledging that Columbia’s current relationship with Harlem is still questionable. The 50th anniversary of the protests comes at a time of expansion for Columbia, which recently completed the construction of two buildings on the new Manhattanville campus in Harlem.

Students in Jones’ class have been exploring the long-term effects of the protests through parallels between the planned gym in Morningside Park and the current campus expansion in Manhattanville.

“It is always really striking to see problems aren’t new. We were talking about the parallels between the gymnasium and Manhattanville,” said Ayo Osobamiro, CC ’18, a student in Jones’ class. “That leaders can make the active decision to make the wrong choice [...] makes you more angry and it makes you want to be more involved in understanding what is going on now because you have the understanding of what went on before.”

Despite the success of the protests in halting the Morningside gym project and holding the administration accountable for its relationship with Columbia’s surrounding communities, students like Sofia Smith, CC ’20, feel as though the University lacks a fundamental understanding of its Harlem neighbors.

“I don’t think Columbia has learned,” Smith said. “The stuff that they were protesting then we’re still trying to protest now in terms of our connection to Harlem.”

However, McCaughey believes that there are logistical differences between 1968 and Manhattanville that are worth acknowledging.

“We are not talking about our public property; Columbia bought or already owned substantial chunks of that property. There were a series of commercial transactions that took place which are quite different from securing city council support to use a space in a public park,” McCaughey said. “I think how both Rupp and Bollinger’s administrations have handled Manhattanville is altogether very different.”

In addition to the discussion of the University’s controversial relationship with the Harlem community, another element Guridy brought up in his course was the disenfranchisement of women in regard to both their roles within the protests and their voices in the overarching 1968 narrative.

“Barnard has definitely not gotten the attention it deserves for the role that Barnard students and affiliates played in 1968,” Jones said. “A lot of the stories from ’68 really have not been fully told yet, which is perhaps surprising after half a century, but for the first 40 years or so, the dominant narrative was these white, male, [Students for a Democratic Society] leaders and their charismatic speeches and their actions, and now really all of our students are interested in other figures who were involved in that story.”

Despite efforts by these professors to create accessible material focused on 1968, students have voiced that the onus also falls on the University to do a better job of educating its students about Columbia’s history.

“The only reason I know about [the protests] is because of [the Black Students Organization] and including my [Contemporary Civilization] professor, who has made a superior effort to educate my class about the 1968 protests,” Maya Matthews, CC ’20, said.

Eliza Bayroff, BC ’20, who learned about the protests in the course U.S. Intellectual History from 1865 to the Present, said that being better informed about the 1968 protests helped her put Columbia’s current reputation as an activist campus into perspective.

“I do think it’s important to learn about the protests here, not only as a cautionary tale about the awful things that can happen when communication between an administration and student body breaks down,” she said. “But also as an example of the ways Columbia has, historically and currently, ostracized the people and communities who also call this neighborhood home.”