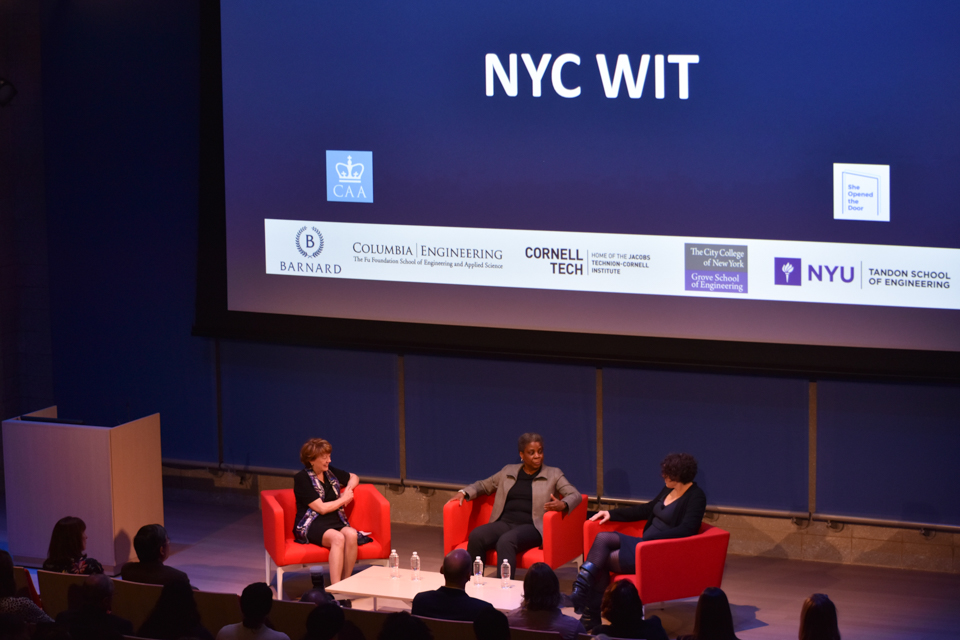 The discussion focused on issues regarding women in engineering and technology workspaces, including combating discrimination and increasing student interest in engineering.

School of Engineering and Applied Science Dean Mary Boyce, along with a panel of female leaders in STEM, discussed women in technology and the need for liberal arts students to gain a foundation in engineering at an event held in the Forum building of Manhattanville on Tuesday.

The discussion, moderated by Bloomberg editor Janet Paskin, Journalism 2000, was held by Columbia Engineering in collaboration with New York City Women in Technology and “She Opened The Door,” a Columbia Alumni Association initiative created to facilitate more networking opportunities among Columbia alumnae. CEO of Veon and former CEO of Xerox, Ursula Burns, SEAS ’82, joined Boyce and Paskin on the panel.

The discussion focused on issues regarding women in engineering and technology workspaces, including combating discrimination and increasing student interest in engineering.

Burns highlighted the need to demystify engineering, particularly because although there is a need for talent, people often don’t consider engineering because they don’t understand what it is.

“It’s a process that you are taught. Just about every problem has a solution,” said Burns, who was the first African-American woman to lead a Fortune 500 company. “It’s a way of thinking. It’s a way of addressing and tackling problems… We have to move past the ‘engineering’ word.”

“What we’ve seen is they take that first class and they want to take a second one,” Boyce said. “You have to help them get over the barrier.”

Boyce compared engineering to solving a puzzle and emphasized the need to combat stereotypes to get more women interested in the field. She also cited that many of these stereotypes can especially trickle down to middle and high school students.

Burns said that an increase in women leaders in the workplace is necessary to enact change, and recognized feeding the pipeline as the start of the process. She spoke to the importance of encouraging young girls at an early age to be interested in subjects like mathematics and physics, and described the pursuit of an engineering degree as a means of escaping poverty.

“I knew generally that I wanted to actually contribute to the world and I wanted to earn enough money for my mother… I had no background. I went to a school that didn’t even have strong math classes,” Burns said.

She also emphasized that women shouldn’t try to fit into a world created by men, and encouraged women to avoid trying to change who they are in order to conform.

“We have to fundamentally be prepared to change the rules. We can’t try to fit in because we’re fitting into a world not designed for us,” she said.

In response to a question about fighting discrimination by men in the workplace, Burns encouraged women to be confident in their abilities.

“We’re there because we’re human. We’re talented,” she said.

Burns later added that as one of the few black women in her workplaces, she has learned to see her minority status as advantage.

“I actually thrived at the fact that I was alone… There were no black women at all,” she said. “When you’re in a room and you’re the only one… it’s kind of hard for people to avoid you.”

Both agreed that women should try to build support systems and find mentors. Burns encouraged women not to be afraid to reach out and look beyond their own backgrounds for mentors. Boyce, who spoke about a lack of female engineers when she was growing up, said that women do not have to only look to other women to find role models.

“When we were in high school, this wasn’t something the girls were studying,” Boyce said. “Your role models do no have to look like or be the same gender… there really weren’t many women leaders at that time. I had amazing support from men… role models can come in many shapes, sizes, genders, colors.”