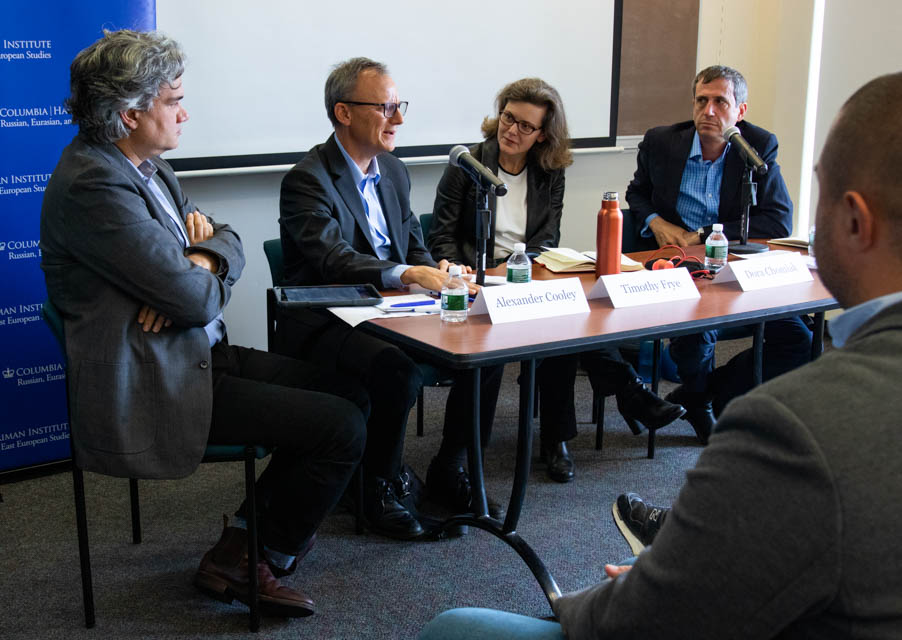 On September 24, Speaker of the House of Representatives Nancy Pelosi announced the initiation of a formal impeachment inquiry of President Donald Trump.

Professors and political organizers discussed the future of American democracy and U.S.- Russian relations at the Special Roundtable on Ukraine and the Impeachment Investigation attended by over 50 students, faculty, and staff on Monday afternoon.

Featured panelists included Professors of Political Science Timothy Frye and Lincoln Mitchell, as well as Dora Chomiak, the Development Director of Razom, a non-profit human rights organization dedicated to supporting democracy in Ukraine. The event was hosted by the Harriman Institute at Columbia, which encompasses Russian, Eurasian and Eastern European Studies.

On September 24, Speaker of the House of Representatives Nancy Pelosi announced the initiation of a formal impeachment inquiry of President Donald Trump following a whistle-blower complaint claiming that senior White House officials purposely hid documentation which could be detrimental to the Trump re-election campaign.

It was later revealed that Trump may have engaged in illegal quid pro quo agreements with newly elected Ukrainian president Volodymyr Zelensky, bending American foreign policy in order to benefit his own re-election campaign. Trump asked Zelensky to investigate the business proceedings of former Vice President Joe Biden’s son, Hunter Biden, taking place in Ukraine under the threat of withholding aid from Ukraine.

In light of the vitriolic political atmosphere, Frye discussed the effectiveness of the inquiry, predicting that most senators will try to remain impartial until they determine the severity of the situation and the validity of the allegations. Additionally, he stressed the significance of Trump’s actions in normalizing the subversion of political norms and the danger that could have on U.S. politics.

“Are we going to live in a country where it’s normal, we just accept it, that the children of the president are going to be earning $80 million while also working at the White House? Where it’s normal for the President to call for foreign governments to come and intervene?” Frye said.

“There’s a lot of focus on impeachment, that’s important; however, as a comparative politics scholar, I think normalization the greater danger by leaps and bounds,” he added.

Though many members of the Democratic Party have called for impeachment inquiries in the past, September marks the first time the official process was catalyzed and the fourth time in the history of the United States that the House has moved forward with such proceedings.

Mitchel agreed, adding that the apparent authoritarian tendencies of Trump mirror those of Soviet dictators of the past. He noted the deferential language Zelensky used to placate Trump over the phone call and compared it to the rhetoric used when addressing other autocratic leaders.

“[Zelensky] is using the language that Trump uses—”great people,” “only the best”—to flatter Trump because he knows how to talk to people like Trump,” Mitchel said. “Because Zelensky is a product of modern Ukrainian history, he knows how to talk to corrupt autocratic, sultanistic leaders like Trump and that speaks to what happened to American politics and that’s something from which we’re not going to recover easily,” he said.

Chomiak, who has worked in Ukraine for over thirty years, remarked that Ukrainians were used to this Trump-esque behavior within government. Chomiak added that people from Ukraine are more familiar with the merging of the private sector and public service, and the concept of civic duty is less present within Ukrainian society.

“What’s been going on in Ukraine for years, what my friends have been trying to explain to me years and years ago when I was working there is that the parliament is not about the nation’s service. The Parliament is a business plan. You join the parliament as a revenue scheme. And I think people in Ukraine are way ahead of the curve than we are in understanding that,” Chomiak said.

As the panelists looked forward to the 2020 election and the potential effects the impeachment inquiry could have, they all concurred that an impeachment vote would force senators to take a stance on Trump and his actions. However, none were sure if Trump would be removed from office as senators would have to take into account if Vice President Mike Pence would be indicted in the impeachment process as well, resulting in Pelosi taking office.

“If there’s one thing that will unify the Republican Party, it’s the idea of ‘“President Nancy Pelosi.’” So that is actually what might keep Trump in office,” Mitchell said.