‘So few answers, so little time’: As students rush to move out, questions about finances loom

‘So few answers, so little time’: As students rush to move out, questions about finances loom 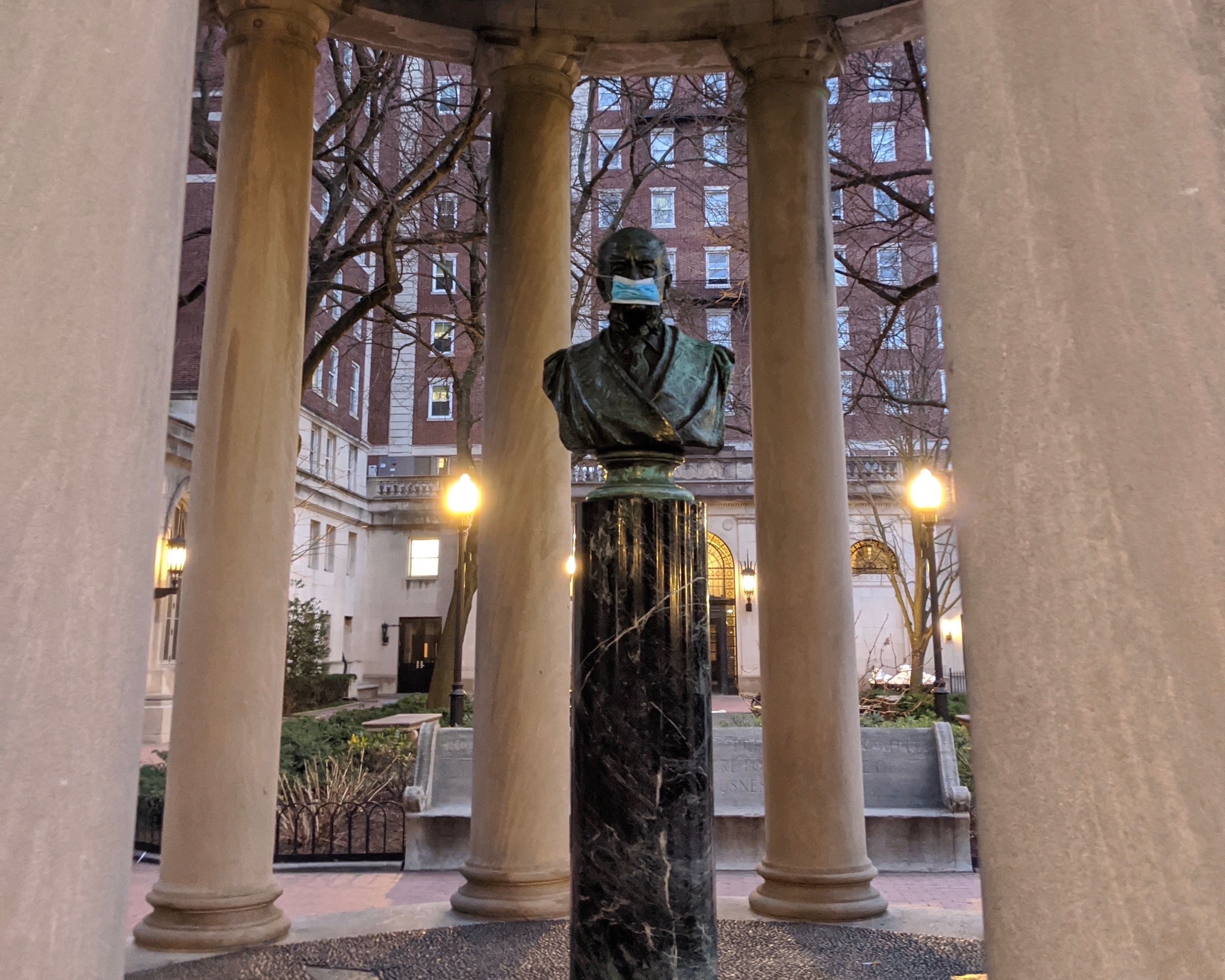 Only those students facing extenuating circumstances such as travel restrictions to their home countries, safety issues at home, or visa restrictions would be permitted to stay on campus.

Grace Bertelli, CC ’21, found herself scrambling for housing options on Sunday morning when she learned she had to vacate her dorm. Members of her family are immunocompromised, so going home could risk exposing them to COVID-19 and endangering their lives.

For students with extenuating circumstances, Columbia provided an option to apply for emergency housing, and Bertelli saw and submitted her form just minutes before it was due at 2 p.m. that day. As she waited to hear back regarding whether her request would be approved, all she could do was start packing. She racked her brain for other options—perhaps she would have to find other housing options. Maybe she would return to Iowa and self-isolate in a motel. But as a first-generation low-income student, few affordable solutions were available.

Bertelli is just one of the many students who scrambled to leave campus within the slim two-day window the University provided. For several days, Columbia seemed to remain steadfast amid a series of announcements that other colleges—including Harvard University, Amherst College, and Cornell University—were forcing students off-campus in light of the growing coronavirus outbreak. On March 12, University President Lee Bollinger and Barnard President Sian Beilock first encouraged students to leave, if circumstances allowed them to do so, by March 30.

But on March 15, the tone shifted: Bollinger announced that the first University affiliate had tested positive for COVID-19 and Columbia students would have to evacuate campus and check out of their housing for the semester by March 17. Only those students facing circumstances such as travel restrictions to their home countries, safety issues at home, or visa restrictions would be permitted to stay. Barnard did not specify a new move-out deadline but reiterated that students should move out as soon as possible. Both offered financial assistance to anyone in need.

Prior to Columbia’s announcement, some students had remained on campus as they considered their options. Many others had left for spring break under the impression that they would soon return to campus to see their friends and coordinate storage for their belongings.

Over the next few days, hundreds of students, both on campus and around the globe, rushed to evacuate campus and remove all their belongings from their dormitories. Across social media, questions came in flurries: How quickly would Columbia approve housing requests? Would housing refunds be provided? When would emergency funding be distributed?

Krishna Menon, CC ’22, was at home in Florida when he received the University’s announcement. Many of his belongings were still in his dorm, and he would have to coordinate shipping them from afar.

As he frantically searched for a company to pack up and store his belongings, he called Manhattan Mini Storage, one of the moving companies Columbia Housing recommended to students who were unable to come back to campus. Menon waited on hold with the company for nearly an hour only to learn that it did not offer the service of packing up rooms. After making over a dozen phone calls to another company Housing recommended, Hudson Moving & Storage, and filling out a quote form on the company’s website, he finally coordinated a time and date.

‘I'm sure … there's a good reason for all of the confusion and panic. But it's definitely really frustrating because I don't want all my stuff to get thrown away,” he said.

Even amid the chaos, a number of students have pointed to Columbia’s notices as more accommodating than those of peer institutions. At Harvard, students were given less than a one-week notice to leave their dorms and received little information regarding accommodations for students with financial insecurity or who could not return home for safety reasons.

“I remember seeing what was happening at schools like Harvard and Princeton and feeling so terrible for them … being evicted at such short notice and with little to no consideration of FGLI students, international students,” Bertelli said. “It's insane how much can change in a week.”

Students who move out will have their housing and meal plans refunded by either Columbia or Barnard at prorated amounts dependent upon the time of check-out. In addition, the University has committed to providing up to $500 in emergency funding to Columbia students who need it for packing, transportation, and storage fees. Barnard is providing financial assistance to students who receive need-based financial aid, but the exact amount is unclear.

The emergency funding was enough to accommodate the costs Menon incurred in packing and storing his things. But for Bertelli, the funds would not have been enough for her to return home. As she waited for Columbia to approve her emergency housing, she considered the measures she would have to take to keep her family safe, including self-isolating in temporary housing for a couple of weeks. But after paying travel expenses, she could not afford those measures.

“If I have to self isolate for 14 days because I live with a bunch of immunocompromised people back in Iowa and wouldn't want to go home to that. I'd have to find a motel room or something. … Thinking about the cost of it, the cost is just astronomical,” she said. Ultimately, Columbia approved her housing application a little over 24 hours after she submitted it.

Though Barnard did not tell its students to evacuate by March 17, those with financial insecurity sought other ways to cover the expensive costs of moving or staying in the city. Many asked administrators whether they would see tuition refunds for housing, and were told that it would depend on their financial aid package. But the answers couldn’t come fast enough.

Julia Coccaro, BC ’22, spent days waiting for answers from Barnard before she was notified that she would not receive a housing refund based on her financial aid package. She needed a place to stay, Coccaro said, because she did not have a home to return to, and wanted to see if she could use the refund to support living costs in the city.

While waiting for information about her refund, Coccaro missed the deadline to request emergency funding. She filled out the form anyway but remains uncertain as to whether Barnard will approve her request. In the meantime, Coccaro has scoured the internet, spent hours on the phone, and posted in Facebook groups to look for temporary housing.

“There has been so little communication, so little transparency, so few answers. … We were given so little time to make these arrangements,” she said.

Meanwhile, New York local and state governments have issued an onslaught of restrictions as the number of confirmed cases in the state rises above 1,500, over 900 of which are in the city. On Monday, the governors of New York, New Jersey, and Connecticut recommended a curfew of 8 p.m for all businesses and people, and the states banned gatherings of over 50 people. In addition, bars and restaurants are only permitted to offer takeout or delivery options.

Mayor Bill de Blasio has stated that the city faces the possibility of implementing a shelter-in-place directive, which could limit movement in the city to that of essential personnel, such as police officers and firefighters. However, Cuomo later stated that there is no imminent threat of total quarantine.

In light of the speed at which new announcements were released, students have also taken the initiative to compile and disseminate information.

Sabina Thomas, SEAS ’20, created the Undergrad Columbia Barnard Mutual Aid Spreadsheet so students could share both their needs and the resources they can give to others. The spreadsheet has since been shared between students and sent out by the Student Affairs Committee. The current edition provides a timeline of University announcements and is split up into categories including housing, Columbia accommodations, moving assistance, storage, and money.

Jonathan Criswell, GS ’21, a University senator and co-chair of the Student Affairs Committee, said he has been working closely with University administrators to provide resources for students.

“International students, first-gen low-income students, students with children, and students with disabilities … they’re not being forgotten, but it’s just that there’s a lot of obstacles that create a challenge,” he said. “We’re trying to make sure nobody falls through the cracks.”

As a resident of Seattle, a city with a high number of COVID-19 cases, Rachel Ng, BC ’23, wanted to apply for emergency housing but was unsure if her circumstances qualified as extreme or extenuating. She emailed Barnard administrators, but after days passed without a response, she decided it was safer to move back home than to risk eviction on even shorter notice.

“I think the biggest problem is … getting a new email every day from the administration about how the policies are changing,” she said. “It really put me in a bind, and I had to be quick on my feet.”

Ultimately, Ng was able to move out with help from friends, especially those from her lion dance group, to secure storage in the New York area, pack her belongings, and coordinate with her family at home.

“I think it’s really amazing that students have such a wide array of people to go to just within their own community,” Ng said. “Even though people might say, ‘Oh, Columbia doesn’t have school spirit,’ ... in times like these, it does go to show that at the end of the day, we will be there to help each other out,” she said.

A previous version of this story stated that Student Affairs Committee (SAC) originally created the Undergrad Columbia Barnard Mutual Aid Spreadsheet. Its has been updated to say that been it was created by Sabina Thomas, CC ’20, and the Engineering Student Council (ESC) Racial Diversity and Inclusion Representative.