A preseason look at football's fortunes

A preseason look at football's fortunes 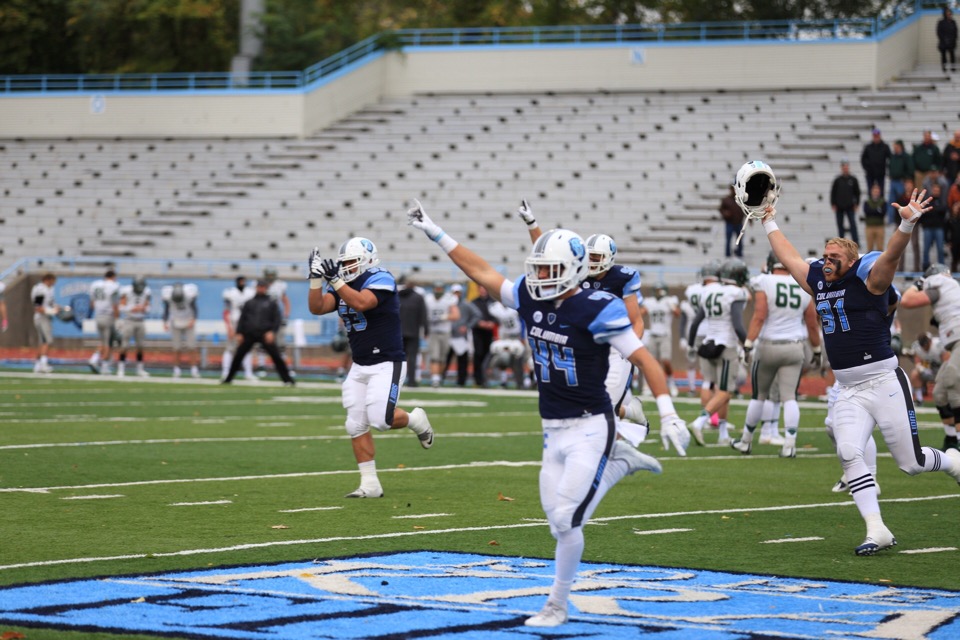 Football season is finally here, and the Lions are more prepared than ever as they enter head coach Al Bagnoli’s third year at the helm. While question marks linger on both sides of the ball, the offense looks stronger this season as senior quarterback Anders Hill returns with the same receiving corps from last season. Whether you scream “Roar, Lion, Roar” at each game just go to Homecoming, or don’t even know where Baker is, here’s who to look out for:

Columbia’s primary quarterback from the 2016 season returns to lead the Lions in his senior year. Hill was fifth in the Ivy League last year with 191 yards per game, and he accounted for 12 touchdowns total. If he remains healthy all season, Hill could be the catalyst that bumps Columbia’s clout to a top-four finish this season.

A key pillar to Columbia’s defense for the past three years, Hyeamang will help lead the Lions’ defensive line in 2017. In his career, Hyeamang has played in 29 of 30 games for Columbia, made 52 tackles, and picked up a Second Team All-Ivy League selection. While the defensive line wasn’t a strong suit for the Lions, which lost four games by seven or fewer points last year, Hyeamang will look to spur a positive change.

Acohido is a first-year from Henderson, Nevada. A wide receiver by trade, Acohido scored four times on returns in his senior year of high school—with each of those coming in the first three weeks of play—leading the team to a regional championship. USA Today even ran an article titled “Is Darion Acohido becoming the nation’s most dangerous return man?” Will he become the Lions’ most dangerous return man?

One of two Lions on the First Team All-Ivy League in 2016—and as a first-year, no less—Milstein had a prolific first year, leading the Ivy League in field goals and field goal percentage. Last year, he scored 52 points as a kicker for the Lions, including all nine points that the Light Blue needed for its first Homecoming win in 16 years.

1. Who is going to step up at linebacker?

Without its class of 2017 linebackers Keith Brady, Christian Conway, and All-Ivy League First Teamer Gianmarco Rea, Columbia has to fill three key defensive spots. The trio had a huge impact—the then-seniors comprised three of the four leading tacklers for the Lions last season. With just seven tackles last season, then-first-year Michael Murphy had the next highest number of tackles for a returning linebacker. Matt Tofano, Jalen Williams, and Cal Falkenhayn round out the rest of the most experienced corps, with 15 tackles between them. Columbia has four incoming first-year linebackers to bring the team total to 16, but it remains to be seen if any of them can adequately replace last year’s standouts.

2. Who is going to run the darn football?

Columbia finished seventh in the Ivy League in rushing, with only 1,251 yards. Running back Alan Watson, who graduated last year, provided 627 of those yards, so Columbia has another big role to fill. Watson’s replacements are most likely sophomores Tanner Thomas and Lynnard Rose, and senior Chris Schroer, all of whom contributed some yardage to a struggling Columbia offense last season. Rose, a jack of all trades who also plays baseball, could settle into a third down back role this season given his . Hill should also provide some rushing yards, as he’s relatively fleet of foot, but the Lions will need to improve their ground game to be successful on offense this season.

3. Can Columbia defend its Homecoming victory?

Last season, Columbia won a Homecoming game for the first time in 16 years, albeit without scoring a touchdown. This year, instead of facing last-place Dartmouth, the Light Blue will take on Penn, last year’s Ivy League champions. Can Columbia build on last season’s win to establish a streak when it plays the Quakers, or will we have to wait another 16 years?